The people have won. They have supplanted a hooligan, bullying mentality with one of peaceful resistance, togetherness, and pride. 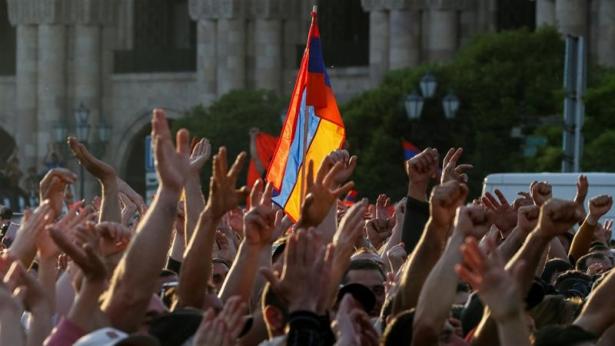 Post-Soviet countries are rough and tumble places, full of intense paradox, humour, microaggression, and beauty. There are fifteen former Soviet states, each with its own cultural and socioeconomic components and struggles. They have all been grappling with the ghost of the Soviet Union in different ways, but the one thing they've all agreed on is this: "Capitalism good, Socialism bad". One of the first things to go during the collapse of the Soviet Union were all the statues of Lenin and Marx. It was a collective sigh of relief, a venting of all the misery which that authoritarian system had inflicted on so many lives for most of the 20th century.

Problem was, those statues, and the oppression they represented, were quickly replaced by new figures of oppression - oligarchs with their hyper-capitalism, buoyed (however indirectly) by the neoliberal ideas that have been dragging the West down since the 1970s.

That has been Armenia since its independence in 1991. But a few weeks ago, a different Armenia woke up, as if from a 27-year coma. And the euphoria and empowerment of that awakening have been intense and palpable, from Yerevan to the remotest villages.

I moved to Armenia in 2014 for a faculty position at the American University of Armenia, although I had never visited before. From day one, I noticed a frustrating and peculiar mantra being repeated across Yerevan: "It's a newly independent country; it's going to take time to fix problems, so let's not be too critical". This seemed both absurd and arrogant to me, not to mention very easy to say when one is speaking from a position of comfort and privilege.

Most of us can't wait more than 30 minutes without wifi, but low-income people with little options are supposed to wait years for some improvement? It was the hollow rhetoric of western neoliberalism: "Don't be too negative. We should make change slowly from the inside. We need good managers. Armenian oligarchs will eventually become like the Rockefellers and Carnegies of the US".Total and utter nonsense, as hundreds of thousands of Armenians recently proved, starting in mid-April when country-wide acts of civil disobedience and strikes peacefully brought down a regime that had seemed immovable for over a decade, as though it was part of Armenia's DNA.

Being on the streets the past few weeks in Yerevan, Gyumri, and Vanadzor, I have seen a wide cross-section of classes and backgrounds speaking with one voice. I have seen nurses, villagers, and high school students closing streets together. I have seen my own university students linking arms with IT workers and truck drivers to block main roads in Yerevan. I have heard speeches from women calling for reforms in education, transparency in elections, and better salaries. I have been in crowds of tens of thousands where strangers from different social backgrounds were handing out free water and snacks to protesters. This has been a peaceful movement with a unified, clear demand: Fair elections, socioeconomic justice and an end to oligarchic control.

Nikol Pashinyan, the opposition leader who rose to iconic stature, has emphasised throughout that this movement is solely an internal, Armenian matter. Although there is certainly a strong element of national pride in the "Velvet Revolution," there can be no doubt that this is also a masterclass in democratic socialist principles: Healthier institutions, less corruption, fair pay, more regulation, better education, advancement for all.

Even though the grandmother blocking the road is as Armenian as the 15-year-old boys who hacked into a closed mall's wifi so I could send photos to my editors, that is not the only glue holding this movement together, contrary to what many Armenians and diasporans might want to believe. The main glue is that citizens finally realised that in a country of barely three million people (many of whom live under the poverty line or barely above it), creating real change is less difficult than they were lead to believe by those self-defeating mantras. They realised that all it takes is peacefully going on strike and blocking the roads for 10 days, and giving politicians and oligarchs a choice between unleashing violence on thousands or coming to terms with the people's will.

The most stunning and humbling part of this movement has been how the protesters kept subverting the nervousness, hesitation, and imposition of "logic" that many people kept trying to project on a nationwide awakening whose depth, power and collective dignity has left many speechless. This was made clear to me when my wife, an editor and photojournalist, came back to the office on the day Pashinyan was forcibly taken away by special security forces. Smiling, she rolled up her jeans and proudly showed off the wounds she'd received from the concussion grenade that fell by her feet. While I became upset and worried that she had been injured while doing her job, she just kept smiling and said, "I'm totally fine. The people are winning this time, finally."

Turns out, she was right. No matter what happens now, the people have won. They have supplanted a hooligan, bullying mentality with one of peaceful resistance, togetherness, and pride. Whatever one thinks about Marx, the "Velvet Revolution" in Armenia has so far been a lesson in a people's empowerment; a nation speaking as one voice for basic socioeconomic rights and collective confidence - something Armenia has been waiting for patiently since independence.

Yes, it will take time for things to change, but now we can say that phrase with a straight face because there has been a major shift in the consciousness of the Armenian people. Democracy - as described in the Armenian constitution  - is being restored. And within a more just framework, change can be equitably cultivated. This time, the people will be the ones tending over what blooms, because this time they planted the seeds of this new Armenia with their own hands.

The views expressed in this article are the author's own and do not necessarily reflect Al Jazeera's editorial stance.

Arto Vaun is a poet, musician, and academic currently based in Yerevan.