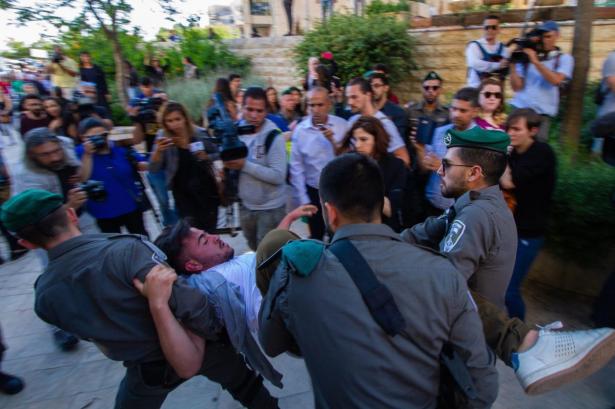 JERUSALEM — Hundreds of Palestinians took to the streets of Jerusalem in protest as American and Israeli officials celebrated the inauguration of the US Embassy in Jerusalem on Monday, the eve of the 70th anniversary of the Palestinian Nakba.

Though the several speeches given during the ceremony made no mention of Jerusalem’s 350,000 Palestinian residents, protesters rose their voices in opposition to the move, which broke with decades of US foreign policy in the region.

Protesters gathered in the West Jerusalem neighborhood of Arnona, about 200 meters away from where the ceremony was taking place, due to a series of road closures by Israeli police.

“The fact that they closed off the streets to block protesters, and sent hundreds of police forces to attack us and arrest us, just shows that they know what they are doing is illegal,” Mohammed Abu al-Hummus, a local activist, told Mondoweiss.

“They tried to keep us far away, so that we could not interrupt their ceremony, and so they could celebrate in peace,” he said.

Abu al-Hummus told Mondoweiss that the transfer of the embassy from Tel Aviv to Jerusalem “crossed every red line,” and criticized the presence of Dallas-based Baptist Pastor Robert Jeffress — who has previously called Islam “a heresy from the pit of hell” — at the ceremony.

“Trump made this move to appease his Zionist Christian base and make them happy, without care for the consequences it will have on Palestinian lives,” Abu al-Hummus said.

“In America, they have the statue of liberty and pride themselves on freedom, but then they come to Palestine and support the racism of the Israeli occupation,” he said. “This move shows us that  they do not understand the true meaning of democracy.”

Mamoun Razeq, a resident of Jerusalem who participated in the protests, expressed similar sentiments.

“The American government is not, and will never be part of peace,” Razeq told Mondoweiss amid the crowd of protesters.

“The transfer of the embassy is a dangerous attack on the Palestinian people, and has created tensions that no one can predict the outcome of.”

“This is a provocation against the Palestinian people, and this is why I am here today,” he said. “I have a right over this land as a Jerusalemite, and I must defend it, even if just with my voice.”

Palestinian writer and Jerusalemite Bodour Hassan told Mondoweiss that the embassy move only solidified the distrust Palestinians have long had in the American government.

“We do not accept the American embassy to be anywhere in Palestine. The transfer of the embassy from Tel Aviv to Jerusalem was done to provoke Palestinians,” she said.

“This just shows us the real face of the US. We saw this face before, but to transfer the embassy solidified what we already knew about the US.”

No faith in the international community

Among the hundreds of protesters in Jerusalem was former prisoner and famed lawyer Shirin al-Issawi.

“I came here as a Palestinian woman and Jerusalemite, to raise my voice against the American support of the Israeli occupation and its attacks and crimes against the Palestinian people,” Issawi told Mondoweiss.

“I am here today, because as a Palestinian, it is my duty. If we did not come here as Palestinians and Jerusalemites to defend our land, who else will support us?,” she asked.

“We have always stood alone against the Israeli occupation’s policies, without any help from the international community, and we will continue to protest this transfer of the embassy, and to make sure our rights are upheld here in Palestine and in Jerusalem, the capital of Palestine.”

Al-Issawi criticized the celebration of the embassy opening by Israeli officials and citizens, saying “their  celebration today shows how brutal and monstrous they are, and the racism that they practice in this land.”

Despite the Israeli suppression of protests and disregard for Palestinian opposition to the move, al-Issawi said that she, thousands others like her, will continue to protest.