Two films depicting a young person’s coming of age are showing on screens now: Boom for Real: The Late Teenage Years of artist Jean-Michel Basquiat and Le Brio about a young Arab woman in Paris who achieves her dream of becoming a lawyer by overcoming the toxic racism of her law school professor. 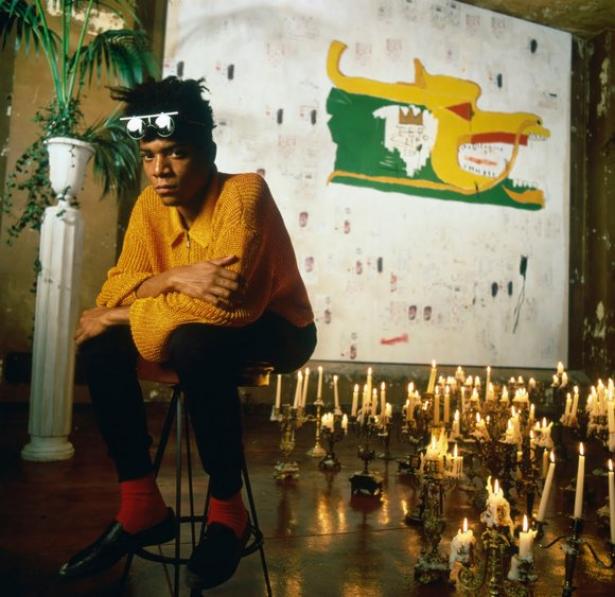 Two new films depicting a young person’s coming of age are showing on screens now or soon: Boom for Real: The Late Teenage Years of Jean-Michel Basquiat and Le Brio. Boom for Real is an absorbing documentary about the rebel New York City artist of the late 1970s and ’80s, and Le Brio is a feature about a contemporary young woman in Paris of Arab background who achieves her dream of becoming a lawyer by overcoming the toxic racism of her law school professor.

It may strike a reader as rather odd for a documentary about Basquiat to focus on his “late teenage years,” when he would die in 1988 at the still very young age of 27. But by then he had already become the toast of the art world, commanding huge prices that recognized both his particular genius and the vagaries of consumption under the overheated grab-all-you-can capitalism of the Ronald Reagan years.

The point of Boom for Real is to lift the curtain on Basquiat’s commercial success and uncover the seedy substratum of culture that street people created in the grimy, pre-gentrified, pre-AIDS New York City of the 1970s, the milieu out of which rose this Brooklyn-born spirit of mixed Dominican and Haitian background (explaining his French name).

It’s important to keep firmly in mind the time-frame of this story, an era when “white flight” from the inner cities created a dystopian, bombed-out mayhem populated only by society’s rejects and dispossessed. On Oct. 29, 1975, unelected President Gerald Ford articulated that social theory out loud by saying he would not provide federal assistance to New York to save it from bankruptcy. Next day, the Daily News concisely and memorably paraphrased the president: “FORD TO CITY: DROP DEAD.”

Director Sara Driver explores Basquiat’s pre-fame years, a time when creative artists were finding expression in media denied them by the gallery system. If you lived in New York City in the late 1970s, or even visited there, you could not possibly miss the gritty graffiti that seemed to cover every available surface. Both the interior and exterior of the subway trains were covered with depressing spray-paint or magic marker runes that seemed to scream out rage and alienation. Some were gang tags, others were personal statements: I was here, I am everywhere, you can’t catch me or control me.

The most ambitious statements were spray-painted subway car exteriors that flew across the skyline with their colorful art. And yes, of course it was art, but these artists bursting with imagination had no other place to show what they were thinking and what they could do. They could not wait until some gallery might discover them and give them a show. In any case, mere walls could not contain the enormity of their ideas.

One graffiti artist mostly wrote cryptic words on walls in what appeared to be a non-sequential poetic koan idiom that questioned social conditions. He signed himself “Samo,” which derived from his growing understanding of the world around him as “Same old, same old.” His anonymity was part of the enigma, but whoever it was, he was already widely recognized in the hip-hop alternative community of the disintegrating, lawless Lower East Side as a distinctive original voice. In time he revealed himself to be Jean-Michel Basquiat.

Basquiat threw himself into all the arts—writing, performance, music, painting, collage—and thrived on repurposing found objects. He lived to create. He could be an exasperating house guest if he crashed at your apartment. You would wake up to find that he had painted your refrigerator door or your overcoat, making art of the mundane and ordinary. But in that ferment of anti-academic arts activism that centered around the famous evenings of happenings at the Mudd Club, Basquiat absorbed technique, history, a critical eye, a curiosity about everything, and a fearlessness of expression. By the early 1980s, when he sold a painting for $500 to visionary art collector Henry Geldzahler, he was made.

To tell this story, Driver, who was herself part of the New York arts scene, captured found film footage of Basquiat and troves of photographs of him taken by friends in an effort to honor and explain, but not romanticize him. Eccentric though he was, he also exuded enormous personal magnetism and intellectual appeal. People could be irritated by him, but they liked him. No form of expression seemed out of bounds for him, and he collaborated generously with numerous other creative types, some who made names for themselves, and others who receded into the cultural humus of the times. Driver interviewed friends and other artists who emerged from that period—white, Black, Latinx—among them Alexis Adler, Jim Jarmusch, James Nares, Fab Five Freddy, Glenn O’Brien, Kenny Scharf, Lee Quinones, Patricia Field, Luc Sante and others.

The 1980s were Basquiat’s prime years. He created what can only be described as masterpieces in painting and other media. His large canvases in particular are exegeses in cultural criticism. As his fame grew, so did his ego and his sense of invincibility. He purchased expensive suits and wore them in the studio, immediately speckling paint all over them and not giving a damn. That was part of his persona and his art—and his own hype.

A rocketing art market for Basquiat’s work started in the artist’s lifetime and still continues: In 2017 a Japanese businessman and collector purchased an untitled 1982 painting by Basquiat for a record-setting $110,487,500, the most ever paid for an American artwork, and the sixth most expensive artwork ever sold at an auction.

But all of that is beyond the scope of the documentary. Where did such a seminal investigator, one of the most important 20th-century artists of any place or time, emerge from? That is what is so intensely fascinating to discover.

And now over to Paris…

In Le Brio, Tel Aviv-born Parisian director Yvan Attal pairs the established French actor Daniel Auteuil as Professor Pierre Mazard with newcomer (to acting) Camélia Jordana, who already has a career as a singer, as Neila Salah. Smart, spunky Neila has grown up in the projects surrounding the French capital, and is surrounded by her community of immigrants from Arab lands. France has many of these, originating in the former French colonies of Algeria, Morocco and Tunisia, as well as from a number of Francophone sub-Saharan nations. They share the common fate of being looked down upon by the native white French, who keep them in lower, subservient jobs and roles.

We meet these two leads in the law school lecture hall on the first day of class. It does not go well. Prof. Mazard is a notorious European chauvinist who enjoys nothing so much as race-baiting and intimidating his students. He has already gotten into trouble over this with the school administration. As his penance, Mazard is assigned the task of coaching Neila to enter the intermural legal debating competition, for which, at the outset, she has no training or interest.

Neither would admit it, but both of them on some level recognize that this is a unique opportunity to prove themselves—he as an eloquent rhetorician and teacher who breathes the psychology of the courtroom, and she as an aspiring attorney who has everything to learn from him despite his provocations and insensitivity. It’s something of a French Pygmalion.

Beyond the storyline itself, Le Brio raises issues about truth in legal argument, and perhaps in life, that shed critical light on the tainted nature of advanced society.

We know little of the professor’s private existence: His abrasive personality does not lend easily to domestic happiness, and in a brief scene in which we meet his mother, we can speculate why. But we do see a great deal of Neila’s life—her mother, grandmother, circle of friends, and the neighborhood boy Mounir (Yasin Houicha) who is no intellectual but is nevertheless caring and goodlooking, and probably capable of a great deal more in life than he gives himself, or than society gives him, credit for.

Over time, Neila learns to give as much as she gets, and in the end Prof. Mazard achieves through this relationship what has eluded him all his life: That someone truly understands him and even loves him despite his faults.

Le Brio will definitely have you rooting for the underdog, but at the same time Prof. Mazard is not portrayed one-sidedly as only a monster. It’s the growing dynamic of mutual gratification as the story moves along that proves so humanly rewarding. Beyond the storyline itself, Le Brio raises issues about truth in legal argument, and perhaps in life, that shed critical light on the tainted nature of advanced society.

If you love the subtle nuance of French film and splendid cinematography (Rémy Chevron), don’t miss it when it comes to a theatre near you.

I caught this warmly affecting comedy in Los Angeles at the COLCOA French Film Festival in its North American premiere on April 26, but general release information was not available. Watch for it.

Eric A. Gordon is the author of two composer biographies: Marc Blitzstein and Earl Robinson. He writes frequently on cultural and political subjects. He is former Chair of the SoCal Chapter of the National Writers Union (Local 1981, UAW).