“Over 500 people we surveyed in West Garfield Park said they do not want this cop academy,” said Monica Trinidad, one of the demonstrators. “There are way more resources of need in their community. They want jobs. They want mental health clinics. They want public schools." 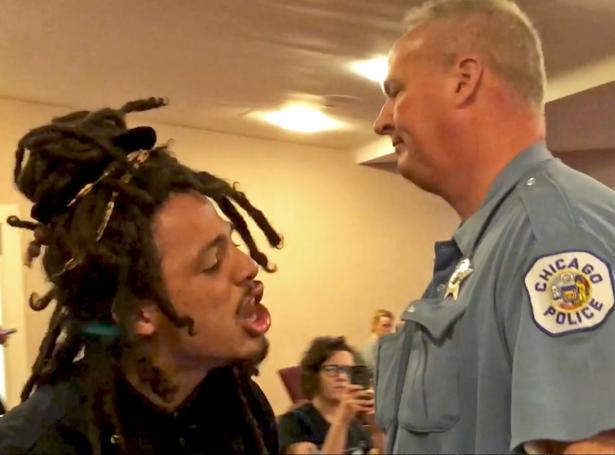 One protester continued shouting at committee members as he slowly walked out of the meeting, helped along by a Chicago Police officer, Fran Spielman/Sun-Times

The $95 million police and fire training academy in West Garfield Park that has drawn opposition from Chance the Rapper and college students around the nation triggered yet another raucous City Hall protest on Tuesday.

A small, but determined handful of protesters — chanting, “Shame on y’all,” “This is wrong” and “How do you look yourselves in the mirror? You are killing us” — disrupted a meeting of the City Council’s Budget Committee.

They were promptly escorted out of the Council chambers. Before they left, aldermen approved an ordinance appropriating $20 million from the sale of a valuable North Side fleet maintenance facility for the new police academy.

Fleet and Facilities Management Commissioner David Reynolds has said the city would work with the Chicago Infrastructure Trust to close the remaining $37 million gap, either through a “straight loan,” a lease buy-back arrangement or by issuing “bonds to pay for it ourselves.”

The funding gap wasn’t what bothered the demonstrators hustled out of City Hall on Tuesday.

They were more concerned about what they called misplaced priorities, as well as aldermen approving a project they said the community doesn’t want.

“Over 500 people we surveyed in West Garfield Park said they do not want this cop academy,” said Monica Trinidad, one of the loudest of the demonstrators.

“There are way more resources of need in their community. They want jobs. They want mental health clinics. They want public schools. They want youth services and after-school programs. They do not want this cop academy. We asked 500 people.”

The celebrity scolding did not stop aldermen from authorizing a $9.6 million land sale that will pave the way for construction of the training campus.

The rapper, whose real name is Chancelor Bennett, argued then that bolstering mental health services and school funding should be higher priorities than the police training that was a primary focus of the U.S. Justice Department’s scathing indictment of the Chicago Police Department.

That Justice Department investigation was triggered by the fatal shooting of Laquan McDonald by Chicago police officer Jason Van Dyke.

She told the City Club of Chicago that the Chicago Police Department “desperately needs” a new training academy, but Emanuel’s plan to build a $95 million complex in West Garfield Park is “ill-conceived.”

“Putting this edifice to policing in this high-crime, impoverished neighborhood where relations between the police and the community are fraught without a clear plan for community engagement is a mistake,” Lightfoot said then.

“The allocation of any funds for a police academy … is viewed by many as further affirmation that needs of the people will never be prioritized over those of the police.”

Ald. Pat O’Connor (40th), the mayor’s City Council floor leader, responded by noting that local Ald. Emma Mitts (37th) and her West Side colleagues all view the academy as a catalyst for economic development and a boon to both public safety and police relations.

O’Connor was equally unmoved by Lightfoot’s claim that the “young people of color” who have organized around the Twitter hashtag #NoCopAcademy” view “every dollar spent in support of the police” as “another example of divestment in these neighborhoods.”

“We get sued all the time for actions by the Police Department. People point to the training as part of the problem. We’re fixing that problem. … You have to do adequate training. You have to have adequate facilities. We’re gonna have to put the facility somewhere and set aside the money it takes to build the facility,” he said.

“They’re suggesting that money not spent on their priorities is a bad expenditure. If they’re saying we need more money for public education and job creation, that’s factual. But that just means we need more money. It doesn’t mean you can take it out of another priority and say that you’re done. ”

“The city somehow gets to sell a fancy building and make money happen,” she said.

“So why can’t they sell a fancy building and make money happen for schools and mental health clinics?”

The new academy will be named after slain Chicago Police Commander Paul Bauer.

Long after the protesters were hustled out and the fund transfer was approved, the Budget Committee meeting ended with a public participation session. It gave supporters and opponents alike an opportunity to be heard — after the fact.