The Orwellian use of language is central. “Liberty,” “individual rights” and a “free society” are code terms for discriminatory and anti-democratic legislation. 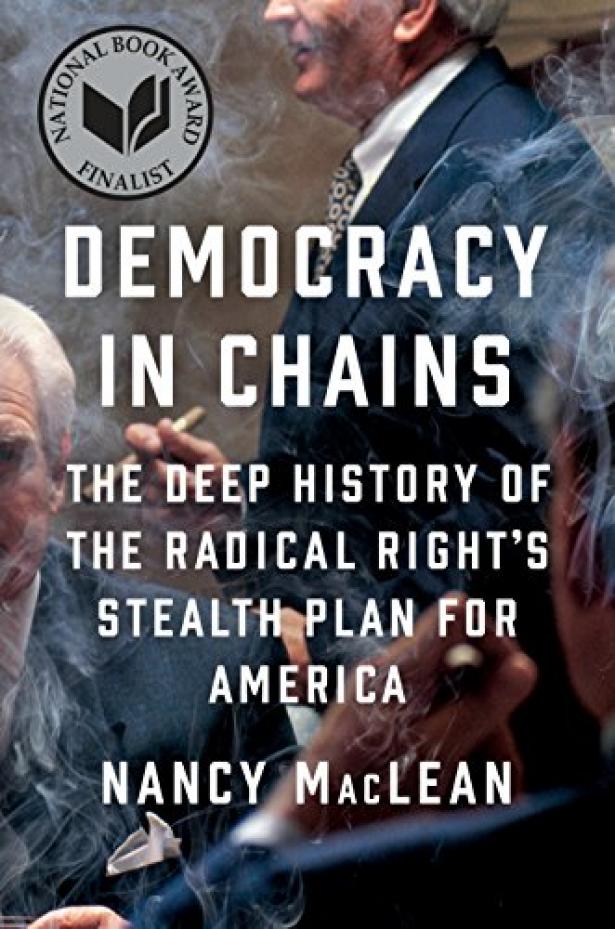 Democracy in Chains: The Deep History of the Radical Right’s Stealth Plan for America, by Nancy MacLean, Viking, New York, 2017

Under pressure from student activists George Mason University President Angel Cabrera in late April issued a public apology of sorts for accepting millions of dollars in cash from the Koch Foundation, in a manner that, in his muted words, “raise questions about donor influence in academic matters” at what is a public institution.

The Koch donations are intended to stack the hiring of like-minded far right, libertarian faculty and to support the Mercatus Center, a market fundamentalist research operation housed at George Mason, that is a base camp for influencing public policy a stones throw away in the nation’s capital.

George Mason is hardly an aberration. The Koch network is spending tens of millions to recruit and place economists and other faculty at scores of other colleges, and has even branched out to K-12 schools, says historian Nancy MacLean as part of a permanent plan to transform public education.https://www.splcenter.org/hatewatch/2018/03/08/democracy-chains-intervi…

Subverting public schools is just one piece of the Koch agenda of course. It’s tentacles are seen across the landscape in imposing politicians and judges who will carry out its program of destroying unions and worker protections, decimating regulations on environmental pollution and climate change detested by the fossil fuel industry, and a host of other policies hated by the market uber alles crowd.

There’s a backstory here, described in chilling detail by MacLean in her recent bookDemocracy in Chains: The Deep History of the Radical Right’s Stealth Plan for America.

MacLean traces the rise of the most extreme modern libertarian ideology represented by Charles Koch today to a little known economist James Buchanan, beginning with his appointment as chair of the economics department at the University of Virginia in 1956.

For Buchanan, and similar ideologues similarly linked to the infamous University of Chicago economics department that also spawned Milton Friedman, the first public expression of their theories were rooted, as is so much in U.S. political, social and economic history, to racism, in vehement opposition to theBrown v Board of Educationschool desegregation decision.

Virginia, encouraged by Buchanan, and allied white politicians and editorial writers, through what became known as a “Massive Resistance” policy, mandated the closure of any public school that sought to comply with the court and desegregate, thinly veiling their response as defending “state sovereignty” and “personal liberty.”

Unlike more academic oriented economists, Buchanan sought to translate his ideas into public policy with an evolving agenda and action plan that should look all too familiar today, premised on:

The Orwellian use of language is central. “Liberty,” “individual rights” and a “free society” are code terms that mean “discriminatory” legislation, from tax funded social programs to the rights of workers to form unions, as well as collective action and majority rule violate the rights of “the minority” – corporations and the super rich.

“Public choice” theory was Buchanan’s calling card – any government actions that interfere with the market are illegitimate “in a society of free men.”

As articulated in one book Buchanan authored with a libertarian colleague, “the common good” and “the general welfare” are branded as smokescreens to hide a secret agenda of politicians who put their self-interest, receiving favors from the majority or help getting re-elected, against the real interests of a society – an unfettered market. It was this theory that somehow won Buchanan a Nobel Prize in economics in 1986, more a statement on a rightwing tilt by the Nobel judges than a particularly innovative economic theory.

Buchanan’s most lasting success however, may have been his influence on Charles Koch who seized on the Buchanan model to more push an even more aggressive action plan of extreme libertarian market fundamentalism that can be seen in the throughout the political and economic system today.

Escalating attacks on unions and worker rights –expansion of right to work laws, restrictions on collective bargaining rights and use of union dues for anything viewed as political activity, and trampling labor law protections through stacking the NLRB with management attorneys, active promotion of union busting, and court attacks on the rights of workers and unions, such as the upcoming Janus decision.

For Buchanan, the veneer of “liberty” and “freedom,” was rapidly ripped away by an embrace of repression when challenged. At UCLA in the late 1960s, at the height of student activism, Buchanan argued that the state and university governing boards should crack down by expelling student protesters, sharply raising tuition to exclude low income students, especially African-Americans, making higher education far less accessible, and punishing faculty who align with students.

First Friedman, then Buchanan, were brought in to assist the Pinochet dictatorship after the 1973 U.S.-sponsored military coup as the junta arrested, exiled and murdered political opponents, banned or severely handicapped unions, and in policies encouraged by Buchanan, privatized Social Security, and pushed through a re-write of the Chilean constitution “with locks and bolts” that cemented into place strict limits on majority rule.

Buchanan outlined for Chilean advisers a “science” of public choice governance that “should be adopted” for matters ranging from “the power of a constitution over fiscal policy to what the optimum number of lawmakers in a legislative body should be.”

In what may be a summary for his entire school of thought, he said he and his collaborators “are formulating constitutional ways in which we can limit government intervention in the economy and make sure it keeps its hand of the pockets of productive contributors.”