The addition of a citizenship question is far more likely to inhibit the successful trial of VRA cases, by increasing the inaccuracy of the Census, than it is to improve the assessment of VRA claims due to greater precision. 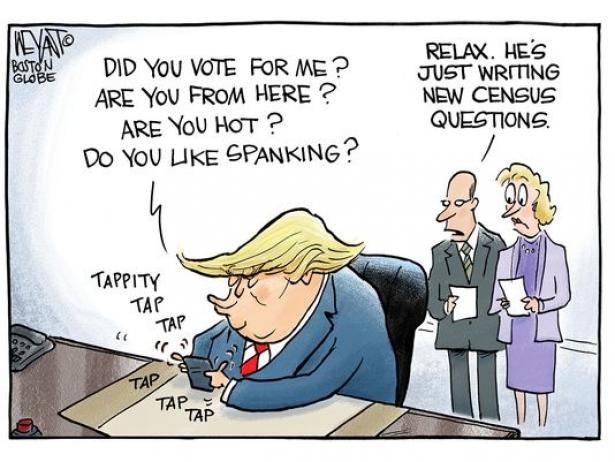 On Friday, May 18, the acting head of the Department of Justice’s Civil Rights Division repeatedly refused to answer questions about his role in the Justice Department’s December 2017 request to the Department of Commerce to add a new citizenship question to the Decennial Census.

John M. Gore, who refused to show up to a May 8 hearing, claimed that he would not “make any statements today beyond those in the Department’s letter (requesting the question) or other publicly available information.” Gore claimed that his silence was required by “longstanding department policy” against discussing litigation outside of court, referring to the four lawsuits that have been filed against his department on behalf of numerous states and voting rights organizations. These lawsuits seek to prevent the addition of the citizenship question, given its anticipated negative impact on the quality of the Census enumeration, which only takes place once every ten years.

Representative Elijah Cummings (D-MD) lost his patience early on, shouting at Gore: “I asked you did you talk to your boss! You mean you’re going to tell me that you can’t answer a question as to whether you talked to your boss who we pay?” At one point, Representative Carolyn Maloney (D-NY) moved to subpoena Gore to answer these questions, but a Republican motion to block the subpoena passed on a party-line vote of 22 to 15.

In addition to entertaining several questions about hypothetical registration and voter fraud (which has been demonstrated, in court, to be nearly non-existent), Gore did at least acknowledge the actual scientific controversy at the heart of the Justice Department’s justification for the question. On the one hand, he acknowledged that the enforcement of the Voting Rights Act, passed in 1965, has never depended on the use of Census citizenship enumeration data directly. Indeed, he even acknowledged that there has NEVER been a public challenge brought under the VRA that was dropped due to inadequate data on racial voting patterns.

On the other hand, Gore did reference a private litigation case in Texas where the party was unable to move forward due lack of adequate data from the American Community Survey (ACS), which provides population estimates of the Citizen Voting Age Population (CVAP). However, he did not reference the case in his submitted testimony. Nevertheless, the claim is clear: census enumeration data is required for the VRA because in small, sparsely-populated districts, such as rural school districts, the margin of error associated with population estimates from the ACS may not be precise enough to make statistically valid inferences about those populations.

Survey samples like the ACS draw random (as possible) distributions of individuals, which provides estimates of population characteristics (i.e., a district is 49% eligible African-American voters) with a margin of error that accounts for sampling inaccuracies (say plus or minus 3% for a sample of about 1,000, such that the actual distribution is nearly always between 46 and 52%). In a census, we attempt to count the entire population, but any uncounted individuals (undercounts) distort the data, leaving us with a less accurate assessment of the actual universe of individuals. Samples, by their nature, may have less precision, but census counts, especially among hard-to-reach populations, can be less accurate, and it is more difficult to correct for undercounts.

This point was driven home by Justin Levitt, Loyola Law School professor and former attorney at the same division of the Department of Justice where Gore serves, who did show up on May 8 when he was invited to testify before the government oversight committee. Levitt’s testimony included an assessment of actual cases, public and private, where he too found one Texas case, Fabela v. City of Farmers Branch, Texas, where ACS data was not itself up to the task of validating a VRA violation claim. However, Levitt demonstrated that complementary, well-tested and judicially accepted techniques were used to assess the claims. More importantly, Levitt describes how the goal of VRA population data is not to definitively predict the precise vote count in a future election based on ironclad certainty about an individual’s voting preferences based on her race or ethnicity, and her propensity to register or turn out to vote for a particular candidate. Instead, the purpose of the analysis is to determine whether past voting behaviors generally indicate that racial or language minority communities would vote similarly most of the time, and whether they would be likely presented with effective equitable electoral opportunity more often than not.

And here we get to the heart of the question, because it is the evidence that we need a citizenship question on the Census short form, which is sparse, that must be weighed against evidence about the negative impact that the addition of such a question might have on the accuracy of the Census count. That evidence is compelling. Indeed, we know from Census analysis that Latino populations are already undercounted, such that the addition of a question that would further reduce response rates among legal immigrant residents will create artificially low population estimates of VRA-protected groups in such cases, making it more difficult to identify and remedy VRA violations.

The addition of a citizenship question is far more likely to inhibit the successful trial of VRA cases, by increasing the inaccuracy of the Census, than it is to improve the assessment of VRA claims due to greater precision. Even Thomas Brunell, once a candidate to direct this Census, recently acknowledged that the administration is not making a scientific, but “a political decision.”  For these reasons, and for all of the reasons provided by all of the past Census directors, the scientists, the civil rights advocates, and all those who have dedicated their lives to advancing both science and sovereignty in our democracy, we have a mutual obligation to protect the scientific integrity of the Census. You can do your part by urging Congress to adopt the 2020 Census Improving Data and Enhanced Accuracy (IDEA) Act, legislation that would protect the accuracy of the 2020 census and ensure that any proposed changes to the count are properly studied, researched, and tested.

Michael Latner is a Kendall Voting Rights Fellow with the Center for Science and Democracy. His research focuses on political representation and electoral systems. His most recent work has focused on redistricting and gerrymandering in the United States, and the impact of electoral administrative law on political participation. Michael holds a Ph.D. in political science from the University of California at Irvine, and is an associate professor of political science at California State Polytechnic University, where he recently directed the Masters in Public Policy program.

Union of Concerned Scientists scientists, economists, and analysts depend on people like you to develop practical and effective solutions to pressing real-world problems. We are the leading science-based nonprofit working for a healthy environment and a safer world, but UCS accepts no government or corporate funding. With your help, we can continue to conduct in-depth research, debunk the misleading claims of special interests, and engage supporters like you to help secure changes in government policy that can improve our health and safety and protect the environment.

Help Union of Concerned Scientists advance independent science for a healthy environment and a safer world by making a donation today.