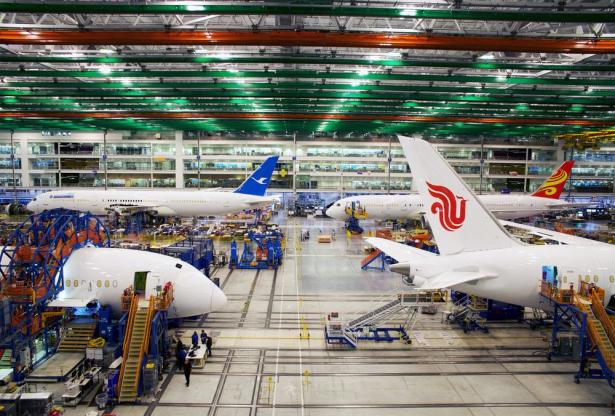 Boeing Co. technicians voted to form the first collective bargaining unit at the planemaker’s factory in South Carolina, scoring a rare victory for organized labor in a state traditionally hostile to unions.

The “micro-unit” will represent fewer than 180 flight-line workers, a small subset of the 7,000 or so workers who build Boeing 787 Dreamliners in North Charleston. But the result gives the International Association of Machinists and Aerospace Workers a foothold in a so-called right-to-work state. The world’s largest planemaker vowed to challenge the election by the small worker group, saying it violated U.S. labor law.
“Boeing continues to believe that this type of micro-unit is prohibited by federal law,” the company said in a statement Thursday. “While we are deeply disappointed with the result and are appealing, we will come together as we continue to deliver on our customer commitments.”
The union victory marked a turnabout in a long struggle between management and the Machinists, with the South Carolina plant the latest battleground. An attempt to organize the factory last year was rejected by 74 percent of workers, while a 2015 campaign fizzled amid an anti-union barrage led by then-Governor Nikki Haley. Her successor, Henry McMaster, tweeted last week that “out-of-state union bosses” were “about as welcome as a Category 5 hurricane.”

“This election was never just about wages. The men and women wanted dignity and consistency in the workplace,” said Mike Evans, lead organizer for the Machinists at Boeing South Carolina. “And this vote put them closer to achieving those goals. We hope Boeing does the right thing by agreeing to sit down and negotiate in good faith.”

The shares were little changed at $352.15 after the close of regular trading in New York. Boeing has advanced 19 percent this year, the second-largest gain on the 30-member Dow Jones Industrial Average.

Boeing decided to build a new final-assembly line for its Dreamliners in South Carolina after a 2008 Machinists strike halted work at its traditional Puget Sound, Washington, manufacturing base. While the Chicago-based company builds only 787s on its campus adjacent to Charleston’s airport, the site is also a contender for a new midrange jet family that Boeing is considering.

In the Thursday vote, 104 employees voted in favor of the union while 65 voted against, according to an email from the National Labor Relations Board. There was one challenged ballot and a void vote.

Boeing has already asked the labor panel to review whether the group of workers, which the company has called “artificially gerrymandered,” should have been expanded to include additional employees at the North Charleston campus.

The victory gives a boost to the Machinists’ effort to organize aerospace workers in the Southeast, with Airbus SE’s factory in Mobile, Alabama also a potential target. South Carolina has the nation’s lowest private-sector ratio of union workers to all workers at 1.7 percent, according to Bloomberg Law’s labor data for 2017.

The “micro-unit” may be handcuffed by a South Carolina law that doesn’t compel workers to join or pay dues to a collective bargaining unit, said Richard Aboulafia, whose firm has done work for Boeing and has been commissioned to do a study by two unions representing the company’s Seattle-area workers.

Working side-by-side with unionized workers may also dispel some of the anti-labor bias that has made North Charleston such a challenge for labor organizers, Aboulafia said.

“It could be, from the worker’s standpoint, that it becomes a desirable thing to join,” he said, “rather than a one-way ticket to Bolshevism.”

— With assistance by Tyrone Richardson, and Josh Eidelson