To Create True Sanctuary Cities, We Must End Racist Policing

Cities across the US have enacted sanctuary measures to resist the Trump administration’s escalation of anti-immigrant policing, but most municipal measures have a central weakness: They only protect immigrants deemed as “law-abiding,” leaving those already ensnared in a racist system unprotected. 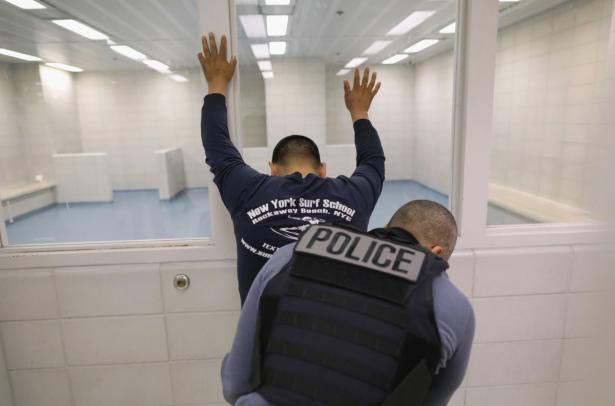 An undocumented immigrant is frisked by an Immigration and Customs Enforcement (ICE) officer at an ICE processing center on April 11, 2018, at the US Federal Building in lower Manhattan, New York City., John Moore/Getty Images

Cities across the US have enacted sanctuary measures to resist the Trump administration’s escalation of anti-immigrant policing, but most municipal sanctuary measures have a central weakness: They only seek to protect immigrants deemed as “law-abiding,” leaving those already ensnared in a racist system of criminalization and policing unprotected.

Sanctuary ordinances, such as the ones adopted by Chicago in 2012 and by the state of Illinois in 2017, seek to inhibit cooperation between local policing agencies and federal immigration authorities by prohibiting local police departments from using agency resources to hold immigrants for federal agents. But as with most sanctuary legislation, these bills distinguish otherwise “law-abiding” undocumented immigrants from “criminal aliens,” who are left unprotected by sanctuary measures and rendered highly vulnerable to detention and deportation.

In major US cities, however, the distinction between “innocence” and “criminality” is often the result of policing practice itself. In aggressively policed low-income neighborhoods and neighborhoods of color, for example, residents are subjected to measures such as “stop and frisk,” as well as “broken windows” and “predictive” policing, which disproportionately ensnare residents in the criminal legal system and saddle them permanently with criminal records. In Chicago, a major mechanism of this racist criminalization is the city’s gang database.

In March of 2017, Wilmer Catalan-Ramirez, a young immigrant father from a South Side Chicago neighborhood, was violently arrested and detained by Immigration and Customs Enforcement (ICE) agents during a nationwide series of raids. ICE agents entered his house and held him at gunpoint, breaking his shoulder as they arrested him in front of his wife and small children; Catalan-Ramirez’s wife recorded the violent raid live and posted it to social media in a widely watched video.

The activist coalition’s report finds that problems with the gang database abound.Following Catalan-Ramirez’s arrest and detention, the Chicago group Organized Communities Against Deportation (OCAD) partnered with the Black Youth Project 100 (BYP 100), Mijente, and the Policing in Chicago Research Group at the University of Illinois at Chicago (UIC), led by sociologist Andy Clarno, to learn more about how Chicago policies leave select immigrants vulnerable to deportation in spite of the city’s sanctuary policy. They learned that Catalan-Ramirez was targeted by immigration agents after his placement on a database that Chicago police officers compile to identify suspected gang members, and that ICE used the database to find his home address.

Chicago’s gang database is a tool of racialized criminalization that brings thousands of people into the criminal legal system based on little more than the whims of city police officers.

First, residents can be added to the database at the discretion of Chicago police officers who are not required to provide any evidence of gang affiliation or criminal activity; indeed, 67.5 percent of those in the gang database have no arrest record involving violence or weapons use. In Catalan-Ramirez’s case, he had been placed in the database by two different officers who identified him with two different gangs; there was no evidence of his affiliation with either.

Second, people are not notified when they are placed in the database and have no mechanism to contest their inclusion. Catalan-Ramirez found out he was tagged in the gang database only after ICE detained him.

Third, the gang database is entangled in a web of myriad local and extra-local databases that obscure the reliability of the data and make it difficult to trace and remove erroneous information. For example, even after city officials admitted that Catalan-Ramirez’s addition to the gang database was erroneous, they said they could “modify” his records but not remove them.

Catalan-Ramirez’s case helped expose how federal agencies use information in local databases to target immigrants, and it also showed how tools of the Chicago Police Department are wielded to disproportionately target Black and Brown Chicagoans. In all, Chicago’s gang database is a tool of racialized criminalization that brings thousands of people into the criminal legal system based on little more than the whims of city police officers. And in spite of the capricious nature of the database, the consequences of being added to it can be devastating. Following his being targeted by federal immigration agents, the raid on his home and his violent arrest, Catalan-Ramirez spent the next 10 months in immigrant detention, where he was denied adequate medical care and repeatedly placed in solitary confinement as a reprisal for community efforts to get him released. For him and for so many others, the gang database functions as a weapon that marks Black and Brown bodies as targets of police and belies Chicago’s promise to be a sanctuary city.

Insofar as the database disproportionately targets Black and Latinx Chicagoans, it has also illuminated common cause among communities whose interests are often painted as distinct and even opposed. The coalition of BYP 100, OCAD, Mijente and UIC researchers, for example, brings together Chicago organizers concerned with racialized policing in a campaign to eliminate the gang database and reroute Chicago resources away from policing and toward community investment in education and social services. As they draw attention to racist policing practices and the false promises of city leaders who vow to protect them, organizers mobilize community members to create real sanctuary in their relationships with each other and a wider Chicago community truly invested in equality and justice.

Reyna Wences is a lead organizer at Organized Communities Against Deportation. Follow her on Twitter at @rkwences.

Ruth Gomberg-Muñoz, Ph.D., is an associate professor in anthropology at Loyola University Chicago and author of the book, Becoming Legal: Immigration Law and Mixed-Status Families. Follow her on Twitter at @ruth_g_munoz.

Truthout is a 501(c)3 nonprofit organization dedicated to providing independent news and commentary on a daily basis. Truthout works to spark action by revealing systemic injustice and providing a platform for transformative ideas, through in-depth investigative reporting and critical analysis. With a powerful, independent voice, we will spur the revolution in consciousness and inspire the direct action that is necessary to save the planet and humanity.

Support Independent Journalism. Truthout is a nonprofit and depends on your financial support.