The Supreme Court's Epic Systems denies workers the right under the National Labor Relations Act to challenge wage theft, racial and sexual discrimination, or other concerns. Together with the expected anti-union Janus Decision, this constitutes a one-two punch against unions and workers' rights. 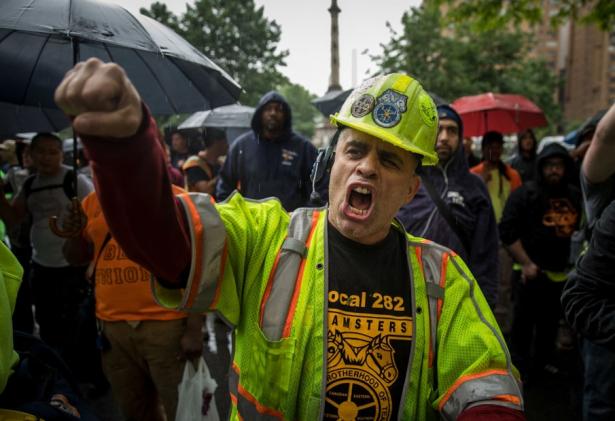 Imagine getting an email from your boss with a five-page attachment and the subject line, “Mutual Arbitration Agreement.” You open the document, and find that it’s a contract that states that you agree to waive your right to take your employer to court, individually or together with your coworkers, and instead pursue all claims through individual arbitration with very limited legal discovery. You read through the contract, but at the end there is no signature line. Instead, it simply states that “I understand that if I continue to work at The Company, I will be deemed to have accepted this Agreement.”

These were the facts before the U.S. Supreme Court when it issued a 5–4 decision last Monday in Epic Systems v. Lewis, holding that the National Labor Relations Act (NLRA) does not protect workers from such forced individual arbitration agreements at work. Within hours of the decision, one of the nation’s largest labor and employment law firms launched a DIY Arbitration Agreement tool to hasten the ubiquity of these agreements and make it as easy as possible for even small employers to use them, “quickly prepar[ing] custom arbitration agreements with class action waivers based on employers’ requirements and preferences.” Therefore, if you are not one of the estimated 60 million Americans already forced to waive your access to the courts and to class actions, you soon may be receiving such an email.

What may be less clear, but no less terrifying, is that, in holding that the National Labor Relations Act did not protect workers from efforts to curtail their “joining hands in litigation”—as Justice Ginsberg put it in her dissent—the Supreme Court may have set the stage for a narrowing of non-union workers’ rights under the NLRA.

Writing for the majority, Neil Gorsuch relies on an exceptionally broad reading of the Federal Arbitration Act—an obscure 1925 statute that was intended to allow commercial parties to enter into arbitration provisions—which he understands as permitting employers to insert almost anything they can think of into an arbitration agreement. Gorsuch pretends that these agreements have existed for decades, yet fails to cite a case prior to 2013, and completely omits the fact they were uncommon until the Court opened the door to them in 1985, and then openly invited them in several years ago in cases such as AT&T Mobility v. Concepcion in 2011. Not only does Gorusch elevate the Federal Arbitration Act, but he also pushes a bizarre misreading of the National Labor Relations Act itself, in which he reimagines the landmark New Deal legislation as only protecting workers in their union activity and “things employees ‘just do’ for themselves in the course of exercising their right of free association in the workplace.” Conveniently, for Gorsuch and his conservative billionaire backers, their reading of the NLRA places workers’ concerns on wage theft, racial discrimination, sexual harassment, immigration, safety issues, and other matters beyond the NLRA’s purview.

Though many identify the National Labor Relations Act as a law that protects workers in their union activities, application of the law has always been far broader than that. At the heart of the NLRA is Section 7, which states in the most pertinent part:

Employees shall have the right to self-organization, to form, join, or assist labor organizations, to bargain collectively through representatives of their own choosing, and to engage in other concerted activities for the purpose of collective bargaining or other mutual aid or protection.

The phrase “engage in other concerted activities for the purpose of collective bargaining or other mutual aid or protection” was intended to protect workers when acting together concerning issues at work, without regard to whether it was related to union activity. Indeed, in the section of the National Labor Relations Board’s website that covers Protected Concerted Activities, it states:

The law we enforce gives employees the right to act together to try to improve their pay and working conditions, with or without a union. If employees are fired, suspended, or otherwise penalized for taking part in protected group activity, the National Labor Relations Board will fight to restore what was unlawfully taken away.

A review of Gorsuch’s strange interpretation of the NLRA in Epic Systems is in order. First off, rather than engage with the legislative history of the act in order to understand Congress’s intent, or look to the history of the act’s development and interpretation, Gorsuch seems satisfied in applying canons of interpretation to suss out the meaning of the law. As a result, in Gorsuch’s reading, the phrase “other concerted activities for the purpose of . . . other mutual aid or protection,” does not carry the broad meaning that courts have found for decades. Instead, Gorsuch explains, when “a more general term follows more specific terms in a list, the general term is usually understood to ‘embrace only objects similar in nature to those objects enumerated by the preceding specific words.’” For Gorsuch, the similarity in the rights listed in Section 7 is a confusing formulation of “things employees ‘just do’ for themselves in the course of exercising their right to free association in the workplace.” (An interpretation that he lifted from an equally confusing concurrence by a Circuit Court judge, by the way.) Gorsuch contrasts this “just do . . . in the workplace” idea with the “highly regulated, courtroom-bound ‘activities’ of class and joint litigation.”

What the “just do . . . in the workplace” formulation includes is unclear, but workers should be concerned about what it excludes. First, the formulation seems to require that the activity occur in the workplace. However, a great deal of concerted activities occur outside the workplace, such as social media activities or meetings. Secondly, Gorsuch contrasts the things that workers “just do” from activities such as class litigation, which are “highly regulated, courtroom-bound ‘activities.’” The distinction seems to lie in the regulation or assistance that workers receive from others. As such, it would seemingly exclude from protection workers using their employer’s email for concerted activities, making a complaint to an administrative agency, or even participating in the sort of individual arbitration that Gorsuch advances here.

Incidentally, Gorsuch also employs another problematic originalist tool that may limit workers’ labor rights in order to conclude that the NLRA does not provide workers a substantive right to engage in class or collective litigation. Gorsuch argues that Section 7 of the NLRA could not have intended to provide this right because “procedures like that were hardly known when the NLRA was adopted in 1935. Federal Rule of Civil Procedure 23 didn’t create the modern class action until 1966; class arbitration didn’t emerge until later still; and even the Fair Labor Standards Act’s collective action provision postdated Section 7 by years.” By this same logic, employee concerted activities that involve social media, email, cell phones, and the like would also not be protected by the NLRA.

Throughout the decision, Gorsuch repeatedly employs language that indicates that the NLRA is primarily focused on union rights, while ignoring the protections for concerted activities that all workers have under the law. Gorsuch’s misinterpretations of Section 7 include:

These dissonant descriptions of Section 7 of the NLRA, combined with the central holding of the case that workers do not have a right to stand together before a court or arbitrator to address the terms and conditions of their work, both constricts the NLRA and provides language for future damage. Given President Trump’s opportunity to remake the judicial map and anti-union litigators’ aggressive tactics, it would take little for Gorsuch’s fringe interpretation of the NLRA to come up quickly as a question before conservative Circuit Courts.

The language of the decision cabins the NLRA to union activity in a manner that sets the stage to destroy the protections that non-union workers currently enjoy for actions taken short of filing lawsuits. Courts interpret the NLRA to prohibit employers from retaliating against non-union workers when they talk to coworkers about political issues affecting work, criticize management for rule changes, refuse to work in unsafe conditions, complain to the media or government agencies about work problems, or post on social media. All of these are activities where workers join hands to better their lot at work, and though they are not union activities, all of them have traditionally been protected by the NLRA. Gorsuch’s opinion contains language that diminishes these non-union concerted activities in a manner that could shrink the NLRA to barely recognizable proportions.

Writing about the Solicitor General’s brief in this case in September, Harvard labor law scholars Sharon Block and Ben Sachs were concerned about the way that “the Administration denigrates [the] right to act outside the traditional union context, calling it ‘residual,’ and suggest[ing] that the court might leave only the ‘core’ protection for unionization and collective bargaining.” In that article, Block and Sachs provided several examples of workers engaging in concerted activities outside the union context, such as workers in Lakewood, Washington, who created a YouTube video about toxin exposure their workplace, or workers in Sante Fe, New Mexico, who engaged a community organization to help fight against deep wage cuts. However, commenting on the Epic Systems decision after it was issued, Block and Sachs argued that the ruling “does limited damage to section 7 of the NLRA.” This was surprising, since Gorsuch’s decision would seem to exclude from protection both examples that Block and Sachs were concerned about in September.

Epic Systems is part of a one-two punch against unions and workers’ rights this Supreme Court term. Janus v. AFSCME, a case bankrolled by anti-union advocacy groups, will decide whether public sector employees can opt out of paying their unions for the representation they receive. Gorsuch will be the deciding vote in Janus, no doubt, as the Court split 4–4 on a similar case following Justice Scalia’s death, and few expect him to side with labor. While Epic Systems denies workers freedom of association in pursuing justice, the anticipated majority in Janus is expected to rely on First Amendment arguments to allow workers to jilt their unions. Therefore, Janus is expected to be a major blow to the membership and finances of already weakened unions. In ostensibly protecting the individual rights of the few workers represented by the union who may not wish to pay any fees, Janus will make it immeasurably more difficult for the majority of workers to join together to form a union.

This may be, in fact, the crowning jewel of a decades’ long conservative legal project to weaken not only unions, but progressives in general. As the New York Times has reported, billionaires and their foundations have poured millions into discrediting and weakening unions. It may be the issue that most unites conservatives of different stripes—not because unions raise wages and reduce racial disparities (though they do), but because of unions’ crucial role in boosting Democratic voter participation. As Sean McElwee reported in The Nation, a recent National Bureau of Economic Research paper found that states that went “right-to-work” experienced a 3.5 percentage point drop off in votes for Democratic presidential candidates. Taken together, the Epic Systems ruling released this week and the expected Janus decision will mark perhaps the greatest attack to working people’s collective rights and political power that the nation has ever seen.

[Moshe Z. Marvit, an employment discrimination and labor attorney, worked at the National Labor Relations Board and was an editor at the Employee Rights and Employment Policy Journal.]

[Leo Gertner is a labor and employment lawyer in Washington, D.C., who previously worked as a grievance representative for janitors in Boston.]