Chia seeds have been cultivated as a food source as early as 3500 BC; they come from the plant Salvia hispanica L., and were at one time a major food crop in Mexico and Guatemala. They may contribute to disease prevention as part of a varied plant-rich diet and other healthy lifestyle behaviors. 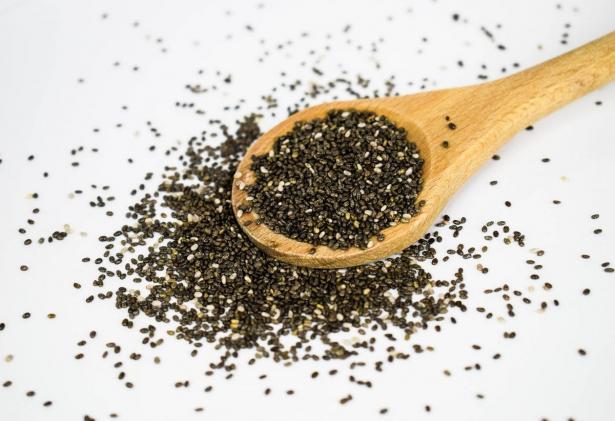 Chia seeds are a complete protein, containing all nine essential amino acids that cannot be made by the body., Harvard T. H. Chan newsletter

“Ch-ch-ch-chia” may be a familiar jingle if you grew up during the 1980s. Little did we know that those popular ceramic pets sprouting grass “hair” were a foretelling of the even greater success their seeds would have in edible form 25 years later. Chia seeds are often referred to as a “superfood” or functional food—unregulated terms more useful in the marketing sphere than by nutrition experts who understand that there is no magic bullet or replacement for a healthful dietary pattern that relies on a variety of nutritious foods.

Functional foods are touted to offer benefits beyond their nutritional value, such as lowering cholesterol or improving gut health. Not only listed as such, chia seeds are also used as a functional ingredient, added to less nutritious items like baked pastries and snacks, to improve their appeal to health-conscious consumers. Health claims about chia seeds include reducing appetite and weight, lowering triglycerides, and improving blood sugar levels in type 2 diabetes.

Chia seeds come from the plant Salvia hispanica L., and were at one time a major food crop in Mexico and Guatemala. Cultivated as a food source as early as 3500 BC, it was offered to Aztec gods in religious ceremonies. According to industry reports, the chia seed market is projected to reach more than 2 billion USD in sales by 2022. [1]

Two tablespoons of chia seeds (1 ounce or 28 grams) contain about 140 calories, 4 grams of protein, 11 grams of fiber, 7 grams of unsaturated fat, 18% RDA for calcium, and trace minerals including zinc and copper. They are the richest plant source of omega-3 fatty acids. Chia seeds are a complete protein, containing all nine essential amino acids that cannot be made by the body. [2]

Chia seeds contain several components that, when eaten as part of a balanced plant-rich diet, may prevent the development of various chronic diseases. Of particular interest by researchers is chia seeds’ high content of linoleic and alpha-linolenic (ALA) fatty acids. Sixty percent of the oil in chia seeds is from these omega-3 fatty acids. [2] However, available research has been more favorable towards a diet containing omega-3-rich foods rather than on chia seeds alone.

In animal and human studies, omega-3 fatty acids have shown a beneficial effect on cardiovascular health (lowering cholesterol, regulating heart rhythms and blood pressure, preventing blood clots, decreasing inflammation). The fiber in chia seeds is mainly soluble fiber and mucilage, the substance responsible for the gluey texture of moistened chia seeds. These fibers may help to lower LDL cholesterol and slow down digestion, which can prevent blood sugar spikes after eating a meal and promote a feeling of fullness.

A large Chinese cohort of more than 63,000 individuals found that those with the highest intakes of omega-3 fatty acids from seafood and plant sources had a 17% reduced risk of cardiovascular mortality compared with those who had the lowest intakes. [3] Few cohort studies include ALA plant sources of omega-3, but these oils are fairly common in the Asian diet. The Nurses’ Health Study found a 40% reduced risk of sudden cardiac death in women who ate the highest amounts of ALA. [4] The Cardiovascular Health Study cohort with more than 5000 men and women, ages 65 years and older, found a 50% lower risk of fatal ischemic heart disease with higher intakes of ALA. [5] Food sources of ALA in these studies included whole grains, cooking oils, legumes, and soy.

Animal studies have shown that chia seeds can beneficially affect cholesterol levels, weight loss, and increased satiety. [6] However, literature reviews and controlled trials in humans have not shown a specific benefit of chia seeds on cardiovascular risk factors including body weight, blood pressure, lipid levels, blood sugar, and inflammation. [6-8] These findings affirm that chia seeds do not act alone to benefit human health but may contribute to disease prevention when incorporated as part of a varied plant-rich diet and other healthy lifestyle behaviors.

People often wonder if chia seeds should be eaten ground instead of whole. The surface of chia seeds is delicate and easily breaks apart with moisture; therefore they are absorbed and digested well in their whole form, unlike flax seeds.

Chia seeds last for 4-5 years without refrigeration. Store in a cool, dry spot.

Chia Gel: Chia seeds absorb water quickly (up to 10 times their weight in liquid!). Place ¼ cup seeds in 1 cup liquid, stir well, and cover. Allow to sit for about 15-20 minutes until the texture changes to a soft gelatin. Store in refrigerator for up to one week. Add to smoothies and soups to boost nutrient value and create a thicker, more satisfying consistency.

Chia Pudding: To make a dessert variation, mix ¼ cup of seeds with one cup of liquid such as milk (almond, soy, or dairy all work) or 100% fruit juice. Allow to sit for at least 15 minutes refrigerated. Add nuts, chopped fresh fruit, or cinnamon if desired.

Chia Sprouts: Place chia seeds in a single layer (use only about a teaspoon to allow enough space to grow) in a terracotta saucer or unglazed clay dish. Spray the seeds with water several times and cover with plastic wrap or a clear glass dish. Put in a sunny spot. Spray morning and evening until green sprouts appear, about 3-7 days. Use these microgreens to garnish salads and sandwiches.

Egg Replacer: This may be used to replace whole eggs in baking. For 1 whole egg, mix 1 tablespoon of whole chia seeds or 2 teaspoons ground chia seeds with 3 tablespoons water. Allow to sit for at least 5 minutes or until the mixture thickens to the consistency of a raw scrambled egg.

Chia seeds are a highly versatile ingredient. They have little if any distinctive flavor, so they don’t compete with other flavors in a dish. They also soften in the presence of liquid and become a less detectable texture. Commercially, they are added to cereals, crackers, beverages, breads, and other baked goods to boost their nutritional value. Basically, chia seeds can be added as long as there is moisture to hold the seed in place.

Use chia gel as a thickener added to smoothies, puddings, and soups (stir the gel into these foods after they are prepped or cooked).

Chia seeds come in black and white varieties, but there is no difference in nutritional content.

There are a few rare cautions when eating chia seeds. A case report presented at the American College of Gastroenterology Annual Scientific Meeting in 2014 made headlines describing a patient who ate dry chia seeds followed by a glass of water. The seeds expanded in the esophagus and caused a blockage. Because they quickly swell after absorbing liquid, it is advised to eat chia seeds that have already been soaked in liquid or are served with a moist food, such as oatmeal or yogurt. Do not eat dry chia seeds by themselves. People who have dysphagia, a condition that causes difficulty in swallowing (as was the case with this patient) or other digestive issues, should eat chia seeds with care.

The contents of this website are for educational purposes and are not intended to offer personal medical advice. You should seek the advice of your physician or other qualified health provider with any questions you may have regarding a medical condition. Never disregard professional medical advice or delay in seeking it because of something you have read on this website. The Nutrition Source does not recommend or endorse any products.