The proposed Atlantic Coast Pipeline, which would carry fracked gas 600 miles from West Virginia to North Carolina and possibly points farther south, has been hit with setbacks in recent weeks that raise questions about its future. 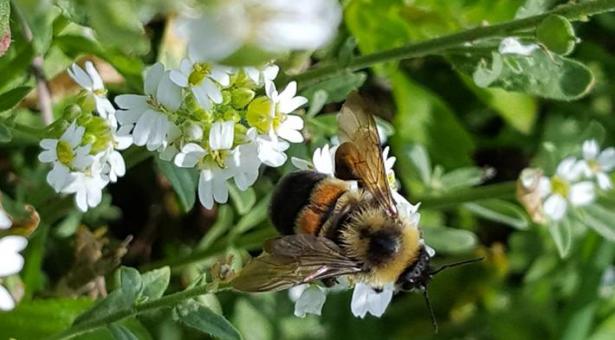 A rusty patched bumble bee, one of the endangered species imperiled by the Atlantic Coast Pipeline., U.S. Fish and Wildlife Service photo by Tamara Smith

Dominion Resources of Virginia, the pipeline's operator, holds a 48 percent stake in the pipeline, while North Carolina-based Duke Energy holds 47 percent and Georgia's Southern Company 5 percent. Dominion's and Duke's ratepayers would foot most of the bill for the $6.5 billion project.

The most immediately consequential setback was last week's federal court order voiding a key permit. On May 15, a three-judge panel of the 4th U.S. Circuit Court of Appeals found that the U.S. Fish and Wildlife Service (USFWS) had failed to set clear limits for the pipeline's impact on threatened and endangered species. The order came in a case brought by the Southern Environmental Law Center on behalf of Defenders of Wildlife, Sierra Club, and Virginia Wilderness Committee, one of four pending suits brought by the SELC related to permits for the pipeline.

"Like other agencies, the Fish and Wildlife Service rushed this pipeline approval through under intense political pressure to meet developers' timelines," said D.J. Gerken, managing attorney in SELC's office in Asheville, North Carolina. "It's foolish and shortsighted to risk losing rare species for an unnecessary and costly pipeline boondoggle."

The pipeline's construction — which got underway this week with a groundbreaking ceremony for a compressor station in West Virginia — imperils eight threatened or endangered species including a fish called the Roanoke log perch, two types of bats, and the rusty patched bumble bee that USFWS added to the endangered species list just last year. The appeals court panel found the agency's limit on "take" — which includes harassing, harming, wounding, and killing — of at-risk species was too vague and didn't satisfy basic legal standards.

And because the USFWS's so-called "incidental take statement" is needed for the construction permit from the Federal Energy Regulatory Commission (FERC), SELC has said it believes the appeals court order should bring work to a halt. However, the developers this week submitted plans to FERC indicating they plan to avoid construction only in habitat areas amounting to 79 miles in Virginia and 21 in West Virginia. A FERC spokesperson said SELC's request to halt all construction remains under consideration. The agency has come under criticism in recent years for being too eager to approve gas pipelines.

"According to the Federal Regulatory Commission's own certificate, FERC's previous notices issued to Atlantic Coast Pipeline developers to proceed are no longer valid," Gerken said. "If what FERC is now saying is that developers can proceed to construction without the Fish and Wildlife Service's valid permit, it is undermining its own requirements."

Claiming that Gov. Roy Cooper (D) and his state's environmental agencies failed to properly assess the disproportionate impacts of the proposed pipeline on communities of color as required under Title VI of the Civil Rights Act of 1964, the complaint calls on the EPA to require the N.C. Department of Environmental Quality's (NCDEQ) divisions of Water Resources, Air Quality, and Energy, Mineral and Land Resources to overturn the permits they granted for the pipeline. It also asks the EPA to require a new environmental justice analysis that adheres to federal requirements and to hold a public hearing on the pipeline in Eastern North Carolina.

The disproportionate impact the Atlantic Coast Pipeline will have on poor communities and communities of color has been well-documented. A report released last year by the NAACP and Clean Air Task force titled "Fumes Across the Fence-Line: The Health Impacts of Air Pollution From Oil and Gas Facilities on African American Communities" showed that of the eight counties along the pipeline's route through North Carolina, seven have a lower median household income and higher poverty level than the state as well as a higher percentage of African-American residents.

And research by professor Ryan Emanuel of N.C. State University found that the pipeline would pass through four American Indian tribal territories in North Carolina, and that 13 percent of the population living within a mile of the pipeline's route through the state is Native American compared to just 1.2 percent of the state's overall population. A report released this month by RTI International, a North Carolina-based nonprofit research institute, confirmed the disproportionate racial impacts.

"How many more Title VI Complaints have to be filed before our government takes seriously the concerns of the communities, and is honest and comprehensive about environmental impact statements?" asked Naeema Muhammad, co-director of the NC Environmental Justice Network (NCEJN), one of the groups that brought the complaint. Earlier this month, the NCDEQ settled a longstanding Title VI environmental justice complaint that Muhammad's group and others had filed with the EPA over the state's permitting of hog farms. "These poor communities of color face an enormously disproportionate burden of a wide range of impacts," said Muhammad.

The environmental justice complaint about the pipeline also notes that, when considering the project's economic impacts, federal regulators compared the incomes of people living near the pipeline with statewide incomes. But when considering racial impacts, they compared people living near the pipeline to the county rather than the state. This approach masked disproportionate impacts on communities of color along the route, according to John Runkle, the attorney for climate watchdog group NC WARN who filed the complaint.

The other groups that are part of the complaint are Clean Water for North Carolina, Concerned Citizens of Northampton County, Concerned Citizens of Tillery, EcoRobeson, Friends of the Earth, and the Blue Ridge Environmental Defense League and five of it its chapters — Concerned Stewards of Halifax County, Cumberland County Caring Voices, Nash Stop the Pipeline, No Pipeline Johnston County, and Wilson County No Pipeline.

Several days before the federal court voided the Atlantic Coast Pipeline's USFWS permit and the environmental justice complaint was filed against the project, a North Carolina-wide anti-pipeline network released a report detailing several counts of possible fraud by the developers and calling for an investigation.

Titled "The Appearance of Fraudulent Misrepresentation of the Atlantic Coast Pipeline's Product and Project," the report was released by the Alliance to Protect Our People and the Places We Live (APPPL), which grew out of a 2016 march against the project in Eastern North Carolina. It documents three instances of potential fraud:

APPPL is calling on North Carolina regulators to conduct an "official inquiry and legal review" of the pipeline developers' practices and claims. Facing South reached out to NCDEQ to find out what it plans to do in response to the request but did not immediately hear back.

Meanwhile, the pipeline developers are continuing to invest in creating a political climate friendly to their plans. So far in this election cycle, Duke Energy has made over $1.2 million in political contributions, including $30,000 in contributions to the National Republican Congressional Committee and the National Republican Senate Committee, according to Federal Election Commission data. And Dominion has invested over $850,000 so far in this election cycle, also contributing $30,000 to both of those key GOP committees. While FERC is an independent regulatory agency, its members are appointed by the president and confirmed by the Senate.