Chicago police and City Hall tracked anti-Trump demonstrators — now state legislators want to let them use drones. Officials are expanding their abilities to watch people in the name of public safety, but the public has little ability to watch back. 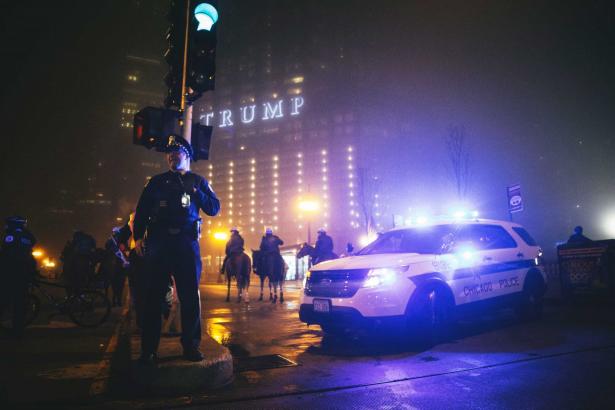 Even before thousands of demonstrators gathered in downtown Chicago to speak out against President Donald Trump’s inauguration last year, city police were watching.

Recently released police and city records show that officers combed through social media posts and opened a formal information-gathering investigation into the protesters.

Then, throughout that day — Jan. 20, 2017 — police and top aides to Mayor Rahm Emanuel closely tracked the movements of protesters, from when they boarded trains and buses in their neighborhoods and continuing through hours of rallies and marches in the Loop.

It was another example of how the Emanuel administration routinely tracks protesters and activist groups, according to records I’ve acquired over the last several years through the Freedom of Information Act.

Now the mayor and police department may soon be able to use drones to monitor demonstrations and other public events.

This spring, mayoral allies in the Illinois General Assembly helped pass a measure that would allow law enforcement agencies statewide to use drones for “legitimate public safety purposes” at public gatherings, including to keep tabs on crowd movements. Each department would have to submit an annual report to the state on its drone usage, but otherwise would largely be able to create its own policies. The bill hasn’t been sent to Gov. Bruce Rauner yet.

Chicago’s police and political leaders have a long, troubled history of snooping on groups exercising their First Amendment rights. Police investigated demonstrators and activists under Emanuel’s predecessor, Richard M. Daley. And for decades before that, including the 20-year reign of Daley’s father, Richard J. Daley, the department’s Red Squad infiltrated dissident groups, civil rights organizations, and others seen as opponents of City Hall. The unit was dismantled in the 1970s and the department adopted new rules that were supposed to safeguard civil rights.

As events on Inauguration Day show, the Chicago Police Department and other city agencies already maintain an extensive camera, data-collection and communications network to keep tabs on protests and other public gatherings. 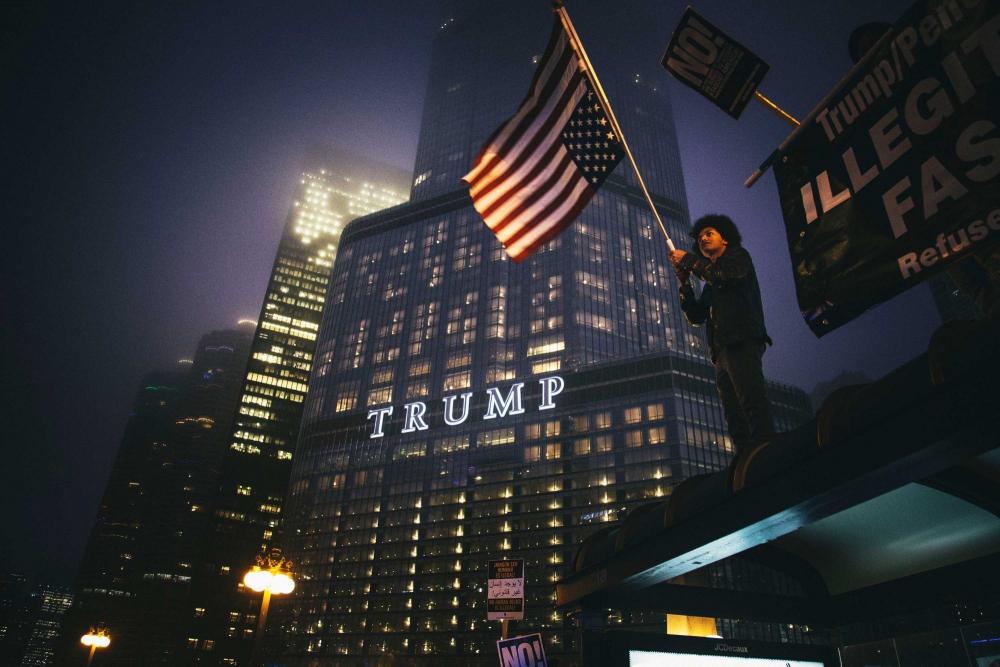 Scores of protesters gathered in front of Trump Tower in Chicago during a demonstration on Inauguration Day 2017. (Dakota Sillyman/NurPhoto via Getty Images)

In late 2016, two activists created a Facebook page to announce plans for an Inauguration Day protest outside Trump International Hotel and Tower in downtown Chicago. Eventually 23,000 people indicated they were interested. Hundreds commented on the event’s Facebook page.

From the beginning, organizers stressed that they wanted the event to be peaceful and focused on speaking out against hate. But dozens of the comments on the Facebook page came from Trump supporters who mocked supporters of Hillary Clinton and other “liberals,” often with crude language.

“Good place for a bomb downstairs Wacker,” Jacobs wrote, referring to the lower level of Wacker Drive, below the spot where protesters planned to gather across the river from Trump Tower. “In one of those homeless persons tents [sic].”

Even a cursory look at Jacobs showed he wasn’t an anti-Trump protester. On Facebook he had “liked” pages such as the Tea Party Patriots, “Ban liberals not guns,” “Not voting for Monica Lewinsky’s ex boyfriend’s wife,” and Occupy Democrats. His post about bombing Lower Wacker also prompted reprimands from other commenters.

When I reached Jacobs by phone recently, he volunteered that he voted for Trump. He also told me his Facebook comment was meant to be “sarcastic” — his way of saying that demonstrations can be dangerous when they take over the streets.

“I consider that a riot when they come down and protest,” Jacobs said.

Police analysts highlighted the comment last year as they were conducting “reviews” of social media about the planned protests, according to department records. The next morning, police Commander Leo Panepinto cited it in paperwork requesting approval to open an investigation. He also wrote that other commenters, including some he described as “Black Bloc” members, discussed “civil disobedience.”

That, he said, raised the possibility of violence. He didn’t name these commenters.

Panepinto is the commanding officer at the department’s Crime Prevention and Information Center, or CPIC, where police analyze information on crimes and public events alongside officials from the FBI and the federal Department of Homeland Security.

That seemed to indicate that, as part of the investigation, police would look into the Facebook post about violence.

Panepinto then asked for legal approval to “monitor” the protest event page and other social media — even though his analysts had already been doing so, as he wrote in his investigation request.

Under the department’s rules, Chicago police are allowed to monitor, infiltrate or conduct surveillance on protesters and political groups — in what they call “Investigations Directed at First Amendment-Related Information” — if they can establish a “reasonable law enforcement purpose” for doing so. But the approval doesn’t come from anyone on the outside; the department’s lawyers make the call.

In this case, the lawyers signed off on the investigation, and police continued to go through protesters’ social media.

Meanwhile, both the department and the city’s Office of Emergency Management and Communications tracked protesters in real time. The information was then shared with top mayoral aides.

Shortly after 11 a.m. on Inauguration Day, for example, Anthony Pascente, the city’s deputy chief operating officer, emailed a protest update to then-Deputy Mayor Andrea Zopp, chief of staff Joe Deal, mayoral spokesman Adam Collins and other city officials. Pascente informed the group that students from Juarez High School in Pilsen were planning to attend a protest in the Loop that afternoon. He and police officials also sent updates about groups headed downtown from Pilsen and the Near North Side.

Two hours later, a dispatch from CPIC informed Emanuel aides and other police officials that the Juarez students were on their way.

Just before 3 p.m., CPIC issued another bulletin noting that students and other protesters had assembled in the Loop, and more were coming: “Approximately 35 people have boarded the Red Line and are heading to Daley Plaza.”

Over the next eight hours, police and other city officials kept tabs on crowds that grew to thousands of protesters as they took trains and buses downtown, gathered near Trump Tower and eventually split off into several marches. One group shut down sections of Lake Shore Drive.

Along the way, police arrested 16 people for misdemeanor offenses such as waving flares, obstructing traffic and running into police officers on bikes. None resulted in a conviction, though one case is pending.

Early the next morning, Panepinto filled out paperwork to close his inquiry into the protests. He noted the arrests but offered no additional details of what investigators had done.

But Jacobs — whose bomb comment was used as a reason for the investigation — told me he was never contacted by the police or any other law enforcement agency.

That’s because police concluded the comment wasn’t “credible,” department spokesman Anthony Guglielmi wrote me in an email. Guglielmi said police received a tip about Jacobs’ post and then opened their investigation — which is a different account than the one Panepinto offered in his paperwork.

“The Department reviewed the tip and vetted the information,” Guglielmi wrote. “It was determined that it was not credible and there was no further need to question the poster.”

Both Guglielmi and a statement from the mayor’s office said city departments team up to ensure public safety while protecting citizens’ First Amendment rights.

Drones would simply enhance those efforts, they said, by adding to their camera network while costing less than using helicopters, which police are already able to do.

“The proposed changes to the Drone Act strengthen the transparency requirements set forth under current law,” Guglielmi wrote, pointing to its annual reporting mandate.

But many questions remain.

Officials in Chicago and beyond are expanding their abilities to watch people in the name of public safety, but the public has little ability to watch them back.

Mick Dumke is a reporter for ProPublica Illinois. He came to ProPublica after two years on the Watchdogs team at the Chicago Sun-Times, where he reported on the dismantling of public housing, the impacts of the state budget crisis on prisoner re-entry and the police department’s use of a secret watch list. Before that, he spent almost a decade as a politics writer and editor for the Chicago Reader. Among his investigations, he reported on racial disparities in drug enforcement and the privatization of Chicago’s parking meter system and other public assets. He has also worked as a reporter and editor at the Chicago Reporter magazine, taught social studies at an alternative high school and studied religion at Northwestern University and McCormick Theological Seminary.

Click here to support Fearless Journalism. Join over 30,000 fellow ProPublicans and help ProPublica investigate immigration, the Trump Administration, the environment and much more. Your donation helps power these stories. Thank you!