labor A Shining City on the Hill Treats Immigrants Humanely 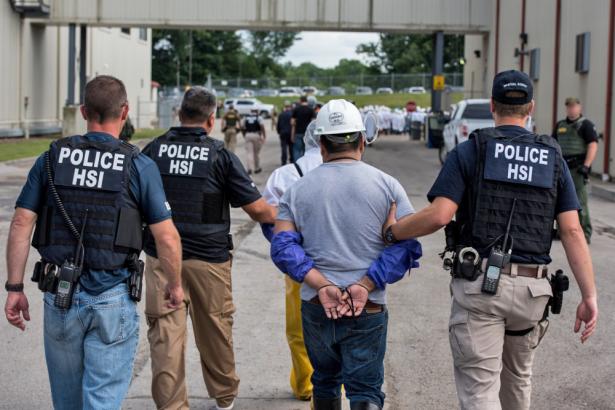 By signing an executive order ending forced separation of immigrant families, President Donald Trump today admitted that the cruel practice was his administration’s policy and that he could have stopped it at any time.

Despite having the power to stop taking children from parents, the Republican administration enforced the practice since April, splitting more than 2,300 youngsters, some just months-old babies, from their mothers and fathers. The administration continued to enforce it even after photographs showed toddlers wailing, audio recordings revealed young children sobbing and pleading for their Mami and Papa, a 30-year-old Honduran father torn from his wife and three-year-old son killed himself in a jail cell, and some parents were deported without their children and without information about how to find or reunite with them.

Make no mistake: the American people opposed this policy. It was not their idea. It was a perverse Republican strategy, conceived and instituted by a Republican administration, Republican Attorney General and Republican secretary of Homeland Security. This is a grotesquerie of Republican construction. This is their Frankenstein.

And they need to clean it up. They must ensure that children already separated are returned to their parents. They must ensure this never happens again. And they must deal with the continuing separation of children and parents that occurs when Immigration and Customs Enforcement (ICE) raids workplaces and arrests undocumented immigrants, as happened yesterday in Ohio. Republican-sponsored immigration bills under consideration in the U.S. House and Senate fail to adequately address these and other problems with the U.S. immigration system.

Congress must outlaw the separation of families and children so that some future administration can’t reverse Trump’s executive order and resume the practice. Congress must provide a path to citizenship for the Dreamers, innocents brought to this country as children. They must legislate a fix for Trump’s unprecedented terminations of temporary protective status (TPS) given to immigrants who were forced from their home countries by natural disasters or civil conflict and who legally built lives in the United States. And making the immigration system more fair, humane and equitable cannot be held hostage to construction of an ungodly expensive and offensive border wall.

As they legislate, Congress must consider the admonition of the U.S. bishops and Pope Francis, who condemned separating children from parents, particularly when it’s done to secure heartless immigration legislation. British Prime Minister Theresa May, Dutch Prime Minister Mark Rutte, even Iran’s supreme leader, Ayatollah Ali Khamenei, denounced the malicious policy of a country that former President Ronald Reagan said should serve as a vision of a shining city on a hill.

Reagan was paraphrasing John Winthrop, an English Puritan and leading figure in the founding of the Massachusetts Bay Colony, who told his fellow colonists on the ship Arabella, “we shall be a city upon a hill. The eyes of all people are upon us, so that if we shall deal falsely with our God in this work we have undertaken and so cause him to withdraw his present help from us, we shall be made a story and a byword through the world.”

The eyes of the world are upon the United States because of this terrible practice. Although President Trump signed an executive order forbidding the splitting of children and parents at the border, separations resulting from ICE raids continue.

In Ohio yesterday, ICE raided several Fresh Mark meat-packing facilities and arrested 146 people. They were hauled away without regard to their family situation, without concern about whether the detainment meant that young children were stranded without supervision at home. The workers may be deported, leaving behind American-citizen children. Earlier this month, ICE arrested 114 undocumented workers at Corso’s Flower and Garden Centers in Ohio.

The vast majority of undocumented immigrants who cross the Southern border are fleeing violence and persecution in their home countries, including El Salvador, Guatemala and Honduras. Some make the treacherous month-long journey because gangs have killed a family member, demanded to marry an underage daughter, or threatened to kill a 14-year-old son if he doesn’t join the gang. When they are returned, it can be a death sentence.

Yesterday, Democratic Sen. Sherrod Brown, who represents Ohio, said of the ICE arrests, “My first concern is for the children who were separated from their families by the raid, and my office is looking into what we can do to help them. Tearing families apart is not going to fix our broken immigration system. Instead, we need a bipartisan solution that recognizes we aren’t going to deport 13 million people here already, but we can secure our borders and create a pathway for people to earn citizenship if they follow the law, have a job and pay taxes.”

Marc Perrone, president of the United Food and Commercial Workers International Union (UFCW), which represents workers at three of the Fresh Mark plants, agreed with Sen. Brown, “Tearing hard-working men and women apart from their children, families, and communities is wrong. The people who do these incredibly difficult jobs have the right to due process, and to be treated with respect and fairness. Today’s actions will only drive this nation further apart, while also spreading unmistakable pain among neighbors, friends, coworkers, and loved ones. The broken policies that led to these and other workplace raids must be addressed immediately. They are creating a climate of fear where workers across this country are too afraid to stand up for their rights, report wage theft, dangerous work conditions, and other workplace issues.”

Perrone said a nation of immigrants bears an obligation to do better. To be that shining city on the hill, the United States must do better.