food An MSG Convert Visits the High Church of Umami

Monosodium glutamate is a compound molecule in which glutamate is the amino acid responsible for the mysterious deepening of flavor. Its once-vilified reputation has been ascribed to illogic, superstition and even racism. 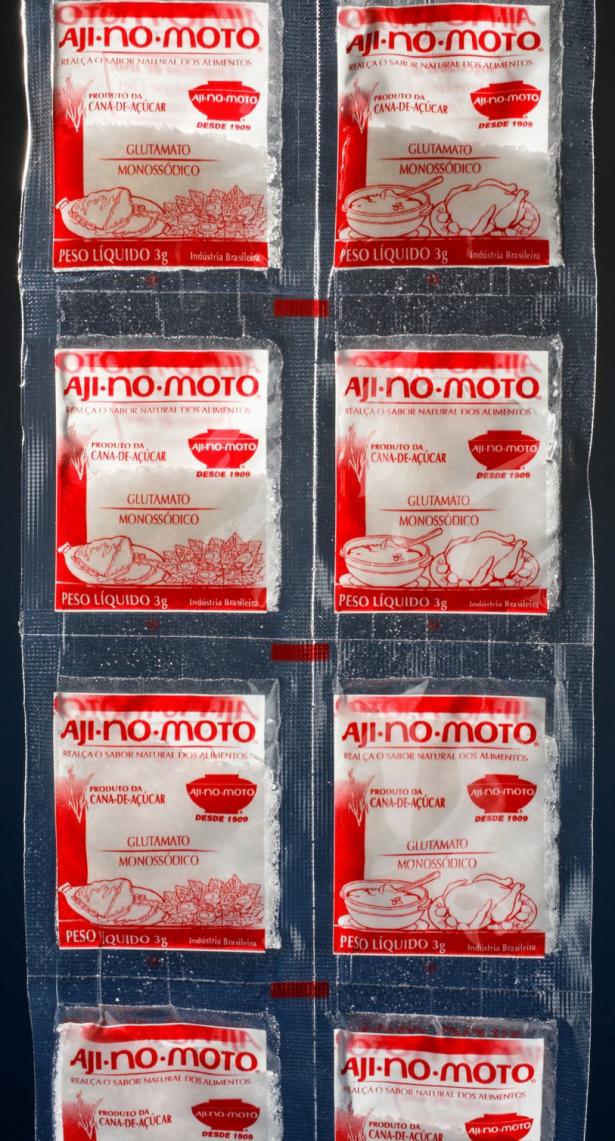 On my kitchen counter, to the side of the stove, there is a jagged skyline of jars and bottles, featuring the condiments and oils and spices that I use too often to ever properly put away. A few are ingredients so key that I buy them in bulk, storing the multi-kilo mega-packages in the back of the closet and decanting them for daily use into more countertop-friendly vessels: olive oil, kosher salt, and monosodium glutamate, or MSG. In one combination or another, this holy trinity ends up in almost everything I prepare—the MSG, with its savory chemical magic, is particularly useful as rocket fuel for dishes of raw fruits and vegetables. I whisk it into vinaigrette before dressing a salad; add it by the teaspoon to the relish of fresh plums and jalapeños that I make each summer; and, whenever I’m feeling snacky, sprinkle it on chopped cucumbers.

A few years ago, this affinity for MSG might have made me seem edgy or cool. Monosodium glutamate has been widespread in the American food supply since at least the nineteen-twenties, imported from China and Japan by major food-production companies like Heinz and Campbell’s, according to research done by Catherine Piccoli, a curator at New York’s Museum of Food and Drink. But a 1968 letter published in The New England Journal of Medicine raised the spectre of “Chinese Restaurant Syndrome,” an illness allegedly brought on by the consumption of MSG, which was commonly used in American Chinese restaurants. Ever since, the chemical compound has been vilified—despite dozens of rigorous studies concluding that the ingredient is innocuous and the “syndrome” nonexistent. Certain scientists and culinarians have long agitated for MSG’s rehabilitation. In a 1999 essay for Vogue titled “Why Doesn’t Everyone in China Have a Headache?,” the legendary food writer Jeffrey Steingarten gleefully ripped to shreds the standard litany of complaints and protests. But only in the past decade has MSG’s reputation truly turned a corner. The Times, Epicurious, and Bon Appétit have risen to its defense. The near-infallible food-science writer Harold McGee has regularly championed its use. At the 2012 MAD symposium, in Copenhagen, the chef David Chang gave a talk on the anti-Asian sentiment that underlies MSG aversion. “You know what causes Chinese Restaurant Syndrome?” Anthony Bourdain asked on a 2016 episode of “Parts Unknown.” Then he gave the answer: “Racism.”

I am white, I grew up in the Midwest, and my childhood exposure to the rich and multifarious cuisines of Asia was limited to takeout pad thai and occasional dumpling jaunts to Chicago’s Chinatown. Like many people with backgrounds similar to mine, I was reflexively MSG-averse. It was Steingarten’s essay that first opened my eyes to the illogic and superstition of my ways. After reading it, I picked up a dusty bottle of Ac’cent-brand MSG at my corner bodega. I brought it home, made dinner, and stepped into the light. After a few months of passionate use, I levelled up from Ac’cent, which includes other flavorings besides MSG, to the more pure and exquisite Ajinomoto, which is available in a glass jar shaped like the company’s mascot, a red-and-white bear named AjiPanda.

Monosodium glutamate is a compound molecule: in it, glutamate, the amino acid responsible for the mysterious deepening of flavor, is stabilized by sodium, becoming something flaky and sprinkleable, like a fine, pearlescent salt. Glutamate is produced naturally by the human body, and it is an essential building block of protein found in muscle tissue, the brain, and other organs. (It is present in remarkable quantities in human breast milk, though it hardly appears at all in milk from cows.) Glutamate also occurs naturally in all the foods that we associate with umami: aged hard cheeses, tomatoes, mushrooms, dried and fermented fish and fish sauces, and savory condiments like Marmite and Worcestershire sauce. Like any mindful cook, I keep a wedge of two-year-aged parmesan in my cheese drawer and a tube of tomato paste curled up in the corner of the butter shelf, knowing that pasta will always taste better under a glutamate-rich snowfall of parmesan, and that a squiggle of tomato paste can deepen any sauce or stew. But, sometimes, you don’t want a dish to be cheesy or tomatoey; sometimes you just want something to taste like itself, only transcendently better. For that, nothing but pure MSG will do. It is to savory flavor what refined sugar is to sweet.

Despite MSG’s image makeover, I’ve found that plenty of people remain resistant to incorporating it into their cooking. They are willing to bring MSG into their homes as a component in other foods—more than happy to accept it as a flavoring powerhouse in Doritos, instant ramen, canned soup, and bouillon cubes, or at least happy to accept its euphemisms, like “hydrolized soy protein” and “autolyzed yeast.” But the notion of buying and using the raw ingredient is often a bridge too far. I’ve started keeping spare bottles on hand to give as gifts when guests at the dinner table pause to compliment my green salad or olive tapenade. It’s not that I’m a particularly adept cook, I say, producing a panda-shaped shaker, I’m just unafraid to use a secret weapon—and I’m ready to convert the skeptics.

Last month, on a visit to Tokyo, I spent a morning paying my respects at the altar of umami, taking three trains to get from my hotel to the production headquarters of Ajinomoto, in an industrial neighborhood in Kawasaki, a city on the southern edge of Tokyo’s exurban sprawl. The company, which has operated in Japan for more than a hundred years, is the world’s largest manufacturer of MSG and MSG-related products, the top-selling provider of “dry savories” in more than a hundred and thirty countries; in 2017, it reported annual global sales of more than ¥1.09 trillion (nearly ten billion dollars). Ajinomoto’s co-founder, Kikunae Ikeda, was a chemist who, in the first decade of the twentieth century, became fascinated by the meaty flavor of a meatless seaweed broth and decided to investigate its source. “There is a taste which is common to asparagus, tomatoes, cheese, and meat, but which is not one of the four well-known tastes of sweet, sour, bitter, and salty,” he wrote of his curiosity. After chemically treating a segment of kombu seaweed and then leaving it to evaporate for several days, he observed that a translucent white crystal began to form. He found that it was chemically identical to glutamic acid, an amino acid naturally present in the human body. It had no odor and a delicate composition, dissolving nearly instantly in liquid. But on the tongue it was revelatory: rich, deep, concentrated, and subtle. Ikeda called this sensation umami (literally, “deliciousness”)—a fifth category of taste. He brought his discovery to Saburo Suzuki, Jr., who was at the time the head of an iodine manufacturing company, and the two went into partnership as Ajinomoto, or “essence of taste.”

The factory complex is a sprawling campus of production buildings, administrative offices, and giant fermentation tanks. (Most of Ajinomoto’s MSG is made from molasses, a cheaper and more reliable source than seaweed.) The campus is bisected by the tracks of the local commuter-rail line—the stop, called Suzukichō, is a nod to the company’s co-founder. (Its previous name was simply Ajinomoto-mai.) Like many of Japan’s old and powerful companies, the factory is delighted to welcome visitors for a tour, which is equal parts propaganda and industrial playacting. When I stepped off the train at Suzukichō station, the platform was dotted with stickers of vermilion panda paw prints, which led me on a short path to a low-slung modernist building with a white school bus covered with smiling pandas parked out front. This is Umami Science Square, Ajinomoto’s visitor center, and the starting point for the factory’s free ninety-minute guided tour.

After watching a brief promotional video inside a cavernous projection room fitted with three-hundred-and-sixty-degree screens, our small group—two middle-aged couples and a pair of twentysomething girlfriends, all of them Japanese, and me—followed a smiling guide to the panda-bedecked bus for a tour of the factory campus. It included a stop to observe one of the packaging facilities, where suited technicians watched as conveyor belts pushed bottles through label machines, and massive articulated robots folded and filled boxes as an animation of a dozen AjiPandas danced happily along the walls to a recording of “The Entertainer.” We drove through the campus, observing the fermentation tanks where tens of thousands of gallons of molasses bubbled in meticulously regulated darkness. We did our own pantomime of factory work, donning hairnets and latex gloves and plastic jackets, spraying down in a cleanroom antechamber, and weighing, filling, and packaging our own small bottles of MSG flakes. We did a taste test of miso soup: pleasantly warm and bland, at first sip, and then—after a gentle snow of Ajinomoto—thunderous and baritone and complex.

The Ajinomoto tour is free, but it requires advance registration. For visitors who show up unannounced, Umami Science Square still has things to offer. One half of the lobby houses what basically amounts to a museum of MSG, featuring vitrine displays of high-umami foods labelled with their respective quantities and varieties of umami-stimulating amino acid. (Kombu was at the top, followed by dried sardines, which are rich in inosinate, another umami-stimulating compound.) Extended along a wall is a timeline of artifacts from throughout Ajinomoto’s company history, from Ikeda’s own bottle containing his first extracted crystals of MSG all the way to the company’s most recent offering, a pyramidal packet of Toss Sala, a salad-seasoning mix that packages MSG with dried herbs, croutons, and nuts. At the gift shop, on the other side of the lobby, visitors can purchase an array of products manufactured by the company’s family of brands, including Knorr soup mix, Hello Kitty instant tea, and Amino-Vita, a sports energy drink.

Overlooking all of this is a massive double portrait of Ikeda and Suzuki, the company’s two founders, loftily gazing down on this airy space dedicated to the wonders of savory taste. I went in a true believer and came out with a holy object, a special-edition offering available only to visitors to the Ajinomoto factory: on my kitchen counter, beside my original AjiPanda shaker, a bottle now sits bearing the pink-hued, feminine face of his girlfriend, AjiPanna.

Helen Rosner is a roving food correspondent for newyorker.com.Read more »