45 Years after His Murder, Victor Jara’s Killers are Finally Convicted

The events that led to the murders of Jara and Quiroga began with their detentions after the military coup and “were decided by the administrative authorities without any court order and under no case/proceeding.” 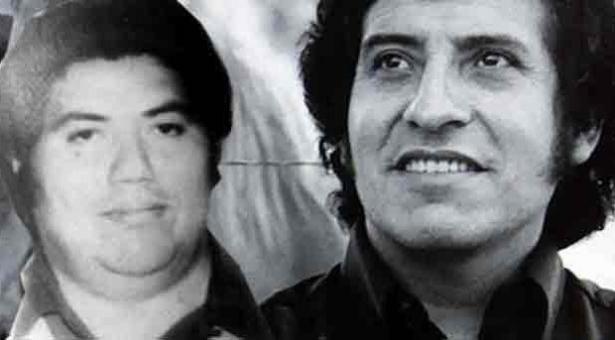 Victor Jara (r.) and the then director of prisons, Littré Quiroga, executed after the coup that overthrew the socialist president of Chile, Salvador Allende,

45 years after the murder of iconic Chilean folk singer Victor Jara and the then director of prisons,  Littré Quiroga, a court on Tuesday finally convicted nine military officers of their murder.

In a ruling of 342 pages, Miguel Vázquez Plaza, the judge of the Court of Appeals in Santiago, sentenced eight retired officers –  Hugo Sánchez, Raúl Jofré, Edwin Dimter, Nelson Haase, Ernesto Bethke, Juan Jara, Hernán Chacón and Patricio Vásquez – to 15 years and a day in prison for the murders and another 3 years in jail for the crime of kidnapping the victims. (It should be recalled that recently, without evidence, the Tralcals – Mapuche leaders – were sentenced to life imprisonment after a process fraught with irregularities.)

The ninth accused, an officer, Ronaldo Meloa, was sentenced to life in prison for 5 years and a day for covering-up the homicides, and 61 days for covering up the kidnappings.

Víctor Jara was assassinated on September 15, 1973, in the Chile Stadium (which is today called the Victor Jara Stadium), 4 days after a military coup that overthrew socialist president Salvador Allende. The singer was a member of Communist Party of Chile and had been appointed cultural ambassador by government of Unidad Popular (People’s Unity). He was detained in the State Technical University, a study centre where he was a teacher.

Littré Quiroga was the General Director of Prison Services. Quiroga, who was on medical leave at the time of the coup, returned immediately to his office at the National Prison Administration (today known as Chilean Gendarmerie). After sending his officers to their homes, he spoke to the military authorities and surrendered himself without any resistance to the Carabiniers (Chilean national police force and gendarmerie). On September 13, he was sent to the Chile Stadium along with other detainees, the place where they would be killed by military officers.

Judge Vázquez’s ruling determined that the events that led to the murders of Jara and Quiroga began with their detentions that “were decided by the administrative authorities without any court order and under no case/proceeding.”

The ruling also established that “within the space of Chile Stadium, the prisoners with certain public standing were identified and separated from the rest by military personnel. During the respective periods of their detention, both Víctor Jara Martínez and Littré Abraham Quiroga Carvajal were recognized by the soldiers and were isolated from the majority of prisoners.  They were placed in special custody and throughout their captivity, suffered constant and violent episodes of physical and verbal abuse at the hands of the military officers present there. Jara was targeted for his the artistic, cultural and political activity that was closely linked to the recently overthrown government. The duo were subjected to physical torture, and severely kicked, punched and beaten up.”

The ruling notes that on September 15, both victims were separated from the other prisoners, taken to different places and shot to death, Víctor Jara was shot with 44 bullets and Littré Quiroga with 23 bullets.

The bodies of Jara and Quiroga were taken out of the Chile Stadium and were thrown on the street, and were later found by citizens in a vacant lot near a cemetery.

[Claudia Carvajal G. is with the Radio U. de Chile.  This article was originally published in Resumen Latinoamericano]