The more that right-wing groups spend to drive teachers from their unions, the harder educators fight back—and the more they are running for office. 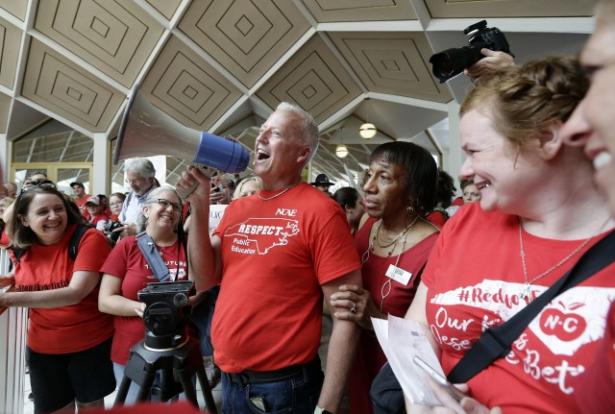 Mark Jewell, president of the North Carolina Association of Educators, protests at the General Assembly in Raleigh, North Carolina, on May 16, 2018., AP Photo/Gerry Broome

By rights, the nation’s teachers should be reeling this summer from a potentially crippling one-two punch.

The Supreme Court dealt teachers the first blow on June 27 with its Janus v. AFSCME ruling, which could drastically shrink the budgets of all public employee unions, including the American Federation of Teachers and the National Education Association. The next day, several far-right groups launched a multimillion-dollar campaign to urge teachers to ditch their unions, sending thousands of emailsdirectly to schools.

But instead of crumpling, teachers are punching back hard. Unprecedented numbers of educators are running for public office. Teachers union membership is going up, not down. And the anti-union emails blasted to teachers by such conservative groups as the Mackinac Center for Public Policy appear to have backfired, at least for the moment.

“The membership numbers are higher than they have ever been, in places all over the country where we have been bombarded by the right wing and by their allies.”

“I have never seen the energy I am seeing right now,” says AFT President Randi Weingarten. “The membership numbers are higher than they have ever been, in places all over the country where we have been bombarded by the right wing and by their allies.”

Some 300 AFT members and retirees are running for office in more than 20 states, Weingarten says, triple the usual crop. The National Education Association has also seen skyrocketing interest in its nascent “See Educators Run” candidate training program, which has trained 120 would-be candidates, and is expanding its focus from municipal to state elections to meet teachers’ demands.

“Educators have the wind—and the public—at their back,” says NEA President Lily Eskelsen García, responding to questions via email. “This is a galvanizing moment for educators and our labor movement.”

In states where recent teacher strikes won widespread public support, the number of teacher candidacies is soaring. In Oklahoma, 97 current and former educators threw their hats in the ring for statehouse seats this year. In Kentucky, at least 40 active or retired teachers, administrators, and school employees filed to run for office, including a high school math teacher who ousted the state house majority leader in the GOP primary in May. Teacher Travis Brenda credited a grassroots teacher uprising for his win over incumbent Jonathan Shell, who had co-authored a bill that would have reduced teacher pensions.

Teachers “are under attack,” said Arizona high school teacher Christine Marsh at a July 10 hearing on Capitol Hill convened by the Senate Democratic Policy and Communications Committee. “In response, we are becoming more engaged, speaking out, and organizing both locally and nationally.”

Marsh, who was Arizona’s 2016 teacher of the year, is herself running for state Senate, buoyed by the “RedforEd” teacher walkouts this spring that brought 70,000 people (clad in red) to the streets and earned teachers a pay raise. Arizona teachers also have gathered 270,000 signatures—nearly twice the amount needed to qualify—for a ballot initiative that would boost state public school funding by $690 million.

The teacher walkouts that started in West Virginia and spread to Arizona, Colorado, Kentucky, and Oklahoma this spring were themselves testament to the mounting frustration over standardized tests, stagnant pay, and shrinking school budgets that is politicizing teachers.

“When people’s livelihoods are threatened, and they don’t get the respect that they feel they deserve, people are willing to act,” says West Virginia high school teacher Don Scalise, who has launched a political action committee dubbed the Future of 55 PAC, after the 55 counties in his state where teachers joined walkouts this year. The PAC has endorsed 30 candidates, and is urging teachers to speak out and participate in local policy debates.

Not all teachers who run will win, of course, and the anti-union forces arrayed against them are formidable.

Not all teachers who run will win, of course, and the anti-union forces arrayed against them are formidable.Deep-pocketed right-wing groups like the Mackinac Center, the Evergreen Freedom Foundation, and the Illinois Policy Institute launched anti-union initiatives such as opt-out websites and door-knocking campaigns within hours of the Janus ruling.

Teachers were a special target for the Mackinac Center, which has received substantial funding from the family of Education Secretary Betsy DeVos. The group launched a “my pay my say” website featuring a convenient “Opt Out Now” button, and sent emails to teachers directly at their schools in a dozen states, including Illinois, Maryland, Massachusetts, New York, and Ohio, urging them to leave their unions. One featured a photo of a fresh-faced teacher overlaid with the message: “Union Members Now Have a Choice in Paying Dues.”

“Because we don’t have that kind of money behind us, it’s even more important to build people power,” says Melissa Tomlinson, assistant executive director of a pro-public education grassroots group called the Bad Ass Teachers.

The New York State United Teachers fired back at the emails with a scathing videotitled “Say No to Betsy” that featured a bobble-head image of DeVos, and urged viewers: “Don’t let Betsy DeVos and her cronies convince you to weaken and abandon our union.”

If the calls that flooded local unions and the AFT are any indication, the Mackinac Center email blast did more to help unions than hurt them. Teachers demanded to know: “How dare they use our school email? How dare they interfere with our view about our union?” says Weingarten. “What’s happening is that their attempts to kill us are backfiring.”