One chef is raising the profile of Gullah/Geechee cuisine to help maintain the Nation’s cultural identity. 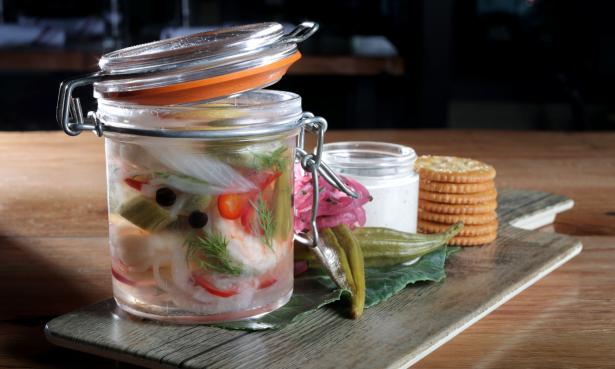 In the world of southern cooking, Gullah/Geechee food is unique. It’s perloo (pirlou), a one-pot dish of rice and shrimp, smoked paprika, garlic pepper and cayenne. It’s crab meat “deviled up” with bread crumbs, egg, and cayenne and presented inside the shell. It’s dishes with roots in West Africa and the Caribbean—peanut stew, benne seed cookies, black-eyed peas fritters, and greens stewed with coconut milk.

In the centuries since the enslaved ancestors of the Gullah/Geechee people were brought to southeastern United States, they have maintained a heritage so rich and distinctive that they are recognized by the United Nations as a “nation within a nation.” The community—and its food—is closely tied to the agricultural and marine resources of the Lowcountry, their homeland, which stretches along the coast and sea islands between Jacksonville, North Carolina, and Jacksonville, Florida.

They are also a community on the front lines of climate change.

Over the next 50 years, sea levels may rise so dramatically as to permanently alter the Gullah/Geechee relationship to their land—and the growing, harvesting, and preparation of food. To combat the loss of the community’s unique culinary heritage, some members of the Nation are working to build a wider space in the American food landscape for Gullah/Geechee cuisine while also creating more climate resilient agricultural practices in the homeland.

According to some predictions, within around 25 years high tides will inundate Charleston, South Carolina, 185 times every year; in the 1970s, tidal flooding happened just twice per year. By 2100, the Atlantic Ocean could rise more than 4 feet, causing some low elevation areas to be permanently underwater. Hurricanes, which are expected to become more powerful and more frequent, will compound flooding.

These changes may force the Gullah/Geechee to migrate to more flood-resistant, higher elevation areas and abandon some existing farms and sites of wild food harvesting. It will be a blow to a nation that, over centuries of working the land and harvesting the waterways, has become integrated with their ecosystem.

The close tie between Gullah/Geechee food traditions and the land is exemplified by the way the Nation cultivates rice. African slaves, ancestors of the modern Gullah/Geechee, were forced to alter the environment to improve harvests through the draining of marshes, the construction of retaining walls to protect crops against flooding, and the diversion of estuary waters into “tide swamps.” These are practices shaped the landscape that exists today. “Rice is at the top of the list of importance in Gullah/Geechee cuisine,” says Queen Quet Marquetta L. Goodwine, the head of state and official spokesperson for the Nation (her official title is “Head Pun de Boddee” in the Gullah language, an English-based Creole).

Seafood is another essential—and its use in Gullah cuisine is embedded both regionally and in African traditions. “We continue the fishing traditions that our ancestors brought here from the west coast of Africa,” says Queen Quet, and hyperlocal ingredients such as shrimp and shark show up regularly in dishes like perloo.

It’s this close relationship with the land that makes the Nation and its food traditions particularly vulnerable to climate change.

Food in Gullah/Geechee culture has always been about “surviving and doing things so there can be a next generation.”

In addition to fighting specific environmental encroachments, the Nation is bracing for climate change by building cultural resilience—especially by preserving and adapting its food heritage.

Food in Gullah/Geechee culture has always been about “surviving and doing things so there can be a next generation,” says Matthew Raiford, co-owner of Gilliard Farms in Brunswick, Georgia, which he and his sister Althea Raiford inherited from their great-great-great grandfather. In this way, adapting to climate change is consistent with Gullah culture. Family farms, many of which have been handed down through the generations, form the backbone of agriculture in the Nation. Gullah chef B.J. Dennis agrees. “Food in Gullah culture tells a story of people who held onto some of the ways and traditions of their West African and West Indian ancestors,” he says.

Dennis is working to familiarize the public—locally and nationally—with these centuries-old food traditions. By preserving its food heritage, he hopes to assure the long-term survival of this essential aspect of Gullah/Geechee identity. In recent years, he’s become something of an ambassador for Gullah culinary traditions, appearing on Anthony Bourdain’s Parts Unknown and Top Chef.

Now, he’s trying to cultivate in the public a more intimate knowledge of Gullah foods and dishes through an immersive culinary experience at the French Quarter Inn in Charleston, South Carolina. “First, we head over to a local farm and pick vegetables. Then, we’ll head to the dock and see what seafood is around,” he says. “Once all of the ingredients are gathered, we’ll head to a private Charleston home and cook.” It’s an “authentic” experience of “vibration cooking,” Dennis explains, referring to the landmark 1970 cookbook-memoir by Vertamae Smart-Grosvenor, Vibration Cooking: or, the Travel Notes of a Geechee Girl in which the chef forgoes measurements and timers and instead “goes with the flow,” guided by feeling and the way the food looks and smells.

“What is the legacy I’m trying to leave behind.”

Dennis is also working to preserve Gullah food culture by documenting its cultural origins. It’s become part of his life’s work to uncover those histories, speaking to elders and consulting with University of South Carolina historian Dr. David Shields.

By raising the visibility of Gullah/Geechee cuisine, Dennis wants to assure that, no matter what happens in the Gullah homeland over the next half-century, the Nation’s cuisine will remain a strong marker of identity. As it was for his African ancestors in the past, he hopes Gullah/Geechee food will continue to be a source of “home” in the future, even if those food traditions must be adapted to survive the effects of climate change.

Which is not to say the Gullah/Geechee are giving up on preserving existing food production, harvesting, and culinary traditions in their homeland. Not by a long shot. Though they can’t stop the sea level rising, some strategies, such as abandoning pesticides in favor of organic techniques that build soil rather than degrade it, may help to mitigate its impacts. Encouraging youth to get more involved with agriculture may be another method of assuring sustainable food production in an uncertain future.

Increasing the diversity of foods produced on Gullah/Geechee farms may also help improve agricultural resilience in the Lowcountry. “Many heirloom crops have gone to the wayside,” Dennis says. “Right now there’s the typical garden of okra, squash, watermelon, peas, [and] greens. … Ingredients like benne seed, sorghum, millet, heirloom rice, and peas, such as the goober pea which came from West Africa need to be reintroduced back into the culture.” Wild plants like the local “toothache bush,” which relieves tooth pain, also have cultural and medicinal value, according to Raiford. “In the Gullah and Geechee, as much as we use things for food,” he says, “it’s also part of our medicine.”

“Everything we do moving forward, we have to think: ‘What is the legacy I’m trying to leave behind.’ That’s been the conversation I’ve been trying to have with people,” Raiford says. It’s a conversation that the Gullah/Geechee didn’t need to have so overtly in the past. “Preserving, carrying things forward... surviving and doing things so that there can be a next generation,” it was just something people did without thinking too much about it.

Ultimately, however, coastal and island farms can do only so much to prepare for coming changes. If planting larger farms becomes impossible, Queen Quet says, small roof gardens or porch gardens may be able to take their place. And if that is no longer an option, Gullah/Geechee cuisine will use produce from higher-elevation southern farms. “Wherever we get ingredients, we add our own Gullah/Geechee flair and touch to the meals,” she says.

The more people outside the community are exposed to the Gullah/Geechee “flair,” the more security the Nation’s food traditions will have in the future. At least that’s what Queen Quet, Chef B.J. Dennis, and others believe. “As long as we can get our hands to touch soil and we have seeds, we will do as our ancestors did and find ways to sustain ourselves with our own food,” Queen Quet says.