The Oregon lawsuit was supported by the National Right to Work Legal Defense Foundation, which is handling some 200 other cases across the country, including a class-action lawsuit in California by 30,000 state employees. 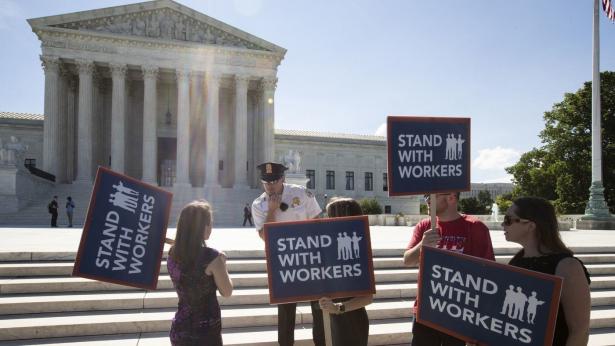 A protest outside the U.S. Supreme Court in June. ,Associated Press

An Oregon state employee and a labor union have reached a settlement over her lawsuit seeking payback of obligatory union fees, marking the first refund of forced fees since the U.S. Supreme Court ruled in late June that government workers can't be required to contribute to labor groups, the employee's lawyers said Monday.

Debora Nearman, a systems analyst with the state Department of Fish and Wildlife, said in her lawsuit filed in April in federal court that the state's practice of forcing her to pay fees to fund union activity violated her 1st Amendment freedoms. She said the Service Employees International Union, or SEIU, opposes her political and religious views and even led a campaign against her husband, Mike, when he successfully ran as a Republican candidate for the state Legislature in 2016.

Nearman is a member of a statewide bargaining unit represented by SEIU but doesn't belong to the union.

The National Right to Work Legal Defense Foundation, which was involved in both the Supreme Court case and Nearman's, is handling some 200 other cases across the country, including a class-action lawsuit in California by 30,000 state employees, said Patrick Semmens, the group's vice president.

If the U.S. 9th Circuit Court of Appeals rules in favor of the plaintiffs in the California case, they stand to be refunded more than $100 million, Semmens estimated.

Nearman said in a telephone interview the mailers sent by a political action committee funded by the union were "disgusting."

One showed a photo of her husband superimposed in front of a police car with flashing lights, giving the impression that he was a criminal, she said. Another hinted he didn't care about disabled people, said Nearman, who suffers from a progressive neuromuscular disease. "I was just heartbroken to see that," she said.

Nearman will be refunded the almost $3,000 she paid over two years. A statute of limitations prevented her from recovering earlier payments, Semmens said.

Melissa Unger, executive director of SEIU Local 503 in Oregon, said the union chose to settle the lawsuit rather than go through a costly and time-consuming legal battle.

The Oregon branch of the SEIU claims 72,000 members who work in state, local government, nonprofit agencies and higher education. Its spokeswoman, Jill Bakken, said the Supreme Court's ruling that eliminated obligatory fees has led to a drop in membership "well within our expectations."

"While we're not sure what the long-term impacts will be yet — the case is still relatively new — we're very encouraged," Bakken said.

The Supreme Court ruling on June 27 involved Illinois state government worker Mark Janus, who argued that everything unions do, including bargaining with the state, is political and employees should not be forced to pay for it.

"The Janus case said it violates public employees' 1st Amendment rights to be forced to fund a labor union," Semmens said. "This [Oregon] case takes the precedent and follows it to its logical conclusion."

The fact that SEIU spent $53,260 to oppose Mike Nearman's candidacy by campaigning against him and distributing fliers that disparaged him "is a vivid example of why people frequently don't want to fund a labor union," Semmens said.