Ant Man and the Wasp: A View from the Ankle Monitor

Ankle monitors are part of the social landscape of the 21st century US. We need to be aware of them, afraid of them, realize that some people are making money off of them and think very seriously about who might want to shackle our ankle. 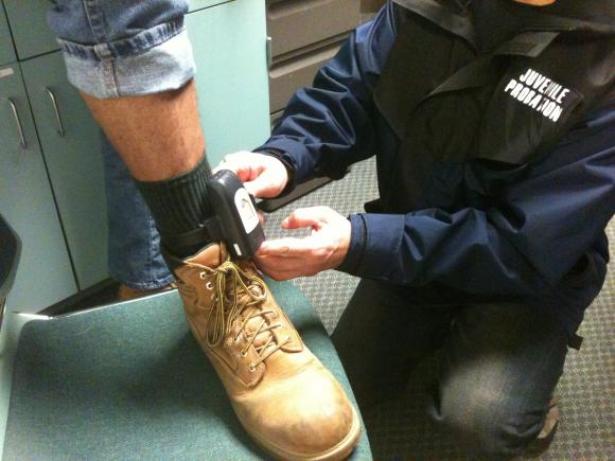 Apart from Black Panther, I don’t normally do Avengers movies (or comic books). I am not even totally certain which movies constitute part of Avengers, or when they began. Then my friend told me that Ant Man and the Wasp had someone in the film on house arrest wearing an ankle bracelet (or what I prefer to call an ankle shackle). I rushed to the computer to buy a ticket.

I spent a year on an ankle shackle. Ever since then I’ve been researching these devices, trying to preach a gospel that these are not just innocent plastic bands, not techno-incarceration lite, but that they are the real deal-E-Carceration.

While other folks in the theater settled into their seats with big buckets of popcorn, I opened my notebook and prepared to scribble in the dark. It only took a couple minutes for that ankle shackle to appear.

Scott Lang (aka Ant Man aka Paul Rudd) is playing with his daughter. His foot, shackle and all, goes through a wall. This means the device has gone beyond the allowed boundaries of house arrest (i.e. outside the house). Rudd’s move triggers a remote alarm. Soon the house fills up with SWAT squad cops ready to tear the place apart in retort to his illegal play time maneuver.

At this point, the electronic monitoring sub-plot quickly unfolds-our superhero has been on the device just three days short of his sentence of two years. More importantly, if he breaks the rules of the monitor they will send him back to prison for life. While everyone else in the theater is warming themselves up for special effects and adventure, I’m scribbling madly about that ankle shackle.  This just may be the real deal, this Marvel-inspired tale of electronic monitoring (EM).

So while the movie takes us on a journey through quantum dimensions and various technological tricks to make things big, small, tiny and medium-sized, for me the shackle never disappears. It frames the entire tale. Even a superhero on the shackle has to worry about getting back home on time, about not being out of permitted areas. While our superhero battles an assortment of evil forces, the monitor is a constant threat in his life, an ever present reminder he is under the control of the state even though he does good things.

Ultimately, EM is a villain as well as a nuisance in the film. We see this in minute details. For example, our superhero has to cover the device in plastic wrap to take a shower. But it is much more complex than merely keeping the shackle dry. We get glimpses of the psycho-reality of house arrest-that a person can go crazy being home alone all day unable to even get a breath of fresh air; that they may have to resort to obsessive exercise routines or, like our superhero here, studying magic in order to maintain sanity. For me, the fear of the techno-wrath of the monitor never disappears. Our hero has to keep thinking of clever techno-tricks to avoid getting charged with violating the rules of his monitor when he leverages his way out of the house to help save the world. Those of us who are not superheroes never had access to those tricks. We stayed chained to our living rooms, waiting for permission for “movement” that often didn’t come.

While I sort of got into the plot flow of the film, the framing of life under the electronic monitor never went away. In fact, the deeper we went into the movie the more I felt that ankle where my device had resided for a year sending me sensations of techno-captivity. Memories popped back into my head-the time I came home from my mother’s house just in time to beat the deadline only to find that I had left my house key at her place. Could I make it there and back without triggering an alarm? I was lucky.  I did. The time I drove my son to his soccer match 20 miles away, only to be told that I didn’t have movement and that I must go home immediately. Hmmm. No way I was going home. I was taking my son to his soccer match. Take me back to prison. I am with my son. I escaped the wrath again but not without lots of warnings that if I did that again … While the popcorn eaters immersed themselves in superhero fantasy, I tracked back to super-reality, the super-reality of E-Carceration.

I’ve thought a lot about this movie since then. Was it a realistic portrayal of life under EM? Ant Man and the Wasp captured the fear, the thin thread a person on a monitor hangs from, the ways it limits a person’s family life whether it restricts playing with your daughter or going to a movie.

On the other hand, maybe it wasn’t that realistic after all. Our superhero was annoyed by it, afraid of it at times, but in the end he easily circumvented the rules to do what he needed to do without getting sent back to prison. Does that diminish the harshness of the reality of people like James Morgan in Wisconsin who went back to prison for 29 days because his monitor battery went flat? Does it trivialize the experience of Keith Shultz in Michigan who got locked up because his apartment burned down and he couldn’t comply with house arrest orders since he had no house? Ultimately, Ant Man and the Wasp is an uncomfortable blend of a Hollywood attempt to capture a reality and Hollywood doing what it does best-trivialize everything or drown it in special effects until its essence is lost.  In the end, though, the film does do one thing in regard to EM-remind us that these devices of E-Carceration are part of the social landscape of the 21st century US.  We need to be aware of them, afraid of them, realize that some people are making money off of them and think very seriously about who might want to shackle our ankle or any other body part the forces of Silicon Valley decide is ripe for colonization and surveillance.