books White Fragility: Why It’s So Hard For White People to Talk About Racism

This new book is sparking a widespread conversation about the obstacles to talking about white racism with white people. 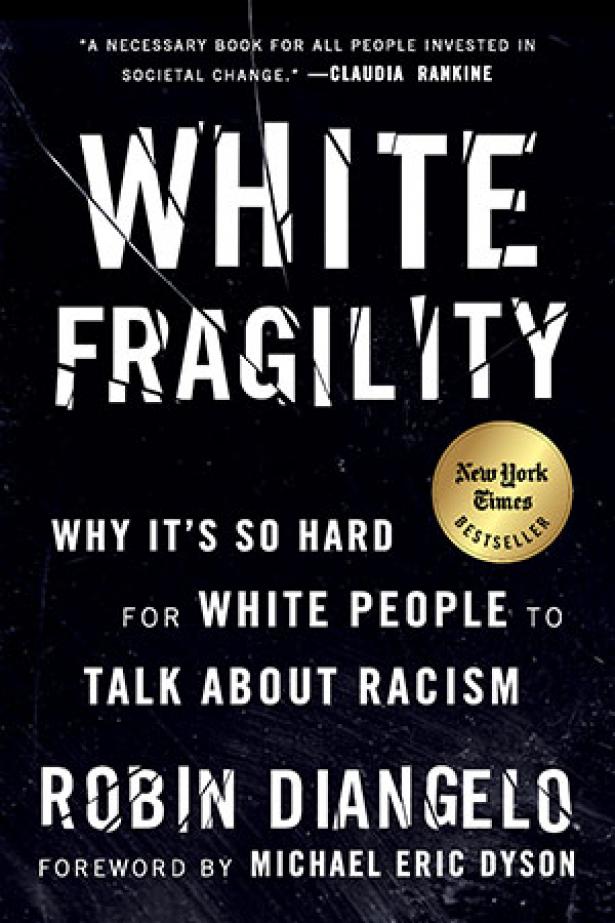 Why It's So Hard for White People to Talk About Racism

Change is uncomfortable. Sometimes it is good, but it can still take some getting used to. So it is no wonder why talking to white people about racism can be a taxing and often abrasive feat.

In her years of research, Dr. Robin DiAngelo, a white woman, concludes that talking about racism with white people disrupts a racial status quo that unsettles them. She explains this and more in her latest book, “White Fragility: Why It’s So Hard for White People to Talk About Racism.”

Most white people don’t want to be associated with any form of white supremacy, so discussing all of its subtle forms is nearly impossible. That’s because most Americans almost exclusively associate white supremacy with the KKK or Charlottesville-like protestors. But Dr. DiAngelo gives a more rounded definition of white supremacy for discussion: “White supremacy is a descriptive and useful term to capture the all-encompassing centrality and assumed superiority of people defined and perceived as white and the practices based on this assumption. White supremacy in this context does not refer to individual white people and their individual intentions or actions but to an overarching political, economic, and social system of domination” (28).

DiAngelo provides telling facts to support her definition. In her research, she found 15 major institutions, including the presidency, teachers, and professional football teams, that were disproportionately controlled by whites from 2016-2017 (30–31).

But statistics alone won’t change the perspective of a person who values white supremacy. Often the antidote for white people is to just not be racist. But Dr. DiAngelo reveals that the American understanding of racism is misconstrued and unhelpful for tearing down its covertly racist system. We cannot simply place ourselves nor other people in a “good/bad binary,” where only people who use overtly racist tones are bad and people who don’t are good.

If, as a white person, I conceptualize racism as a binary and I place myself on the “not racist” side, what further action is required of me? No action is required because I am not a racist. Therefore, racism is not my problem; it doesn’t concern me and there is nothing further I need to do. This worldview guarantees that I will not expand my critical thinking on racism or use my position to challenge racial inequality.

Assuredly many whites are ready to give themselves a pass because their black friends or colleagues never talk about racism. But Dr. DiAngelo cautions, “Just because you and your friends don’t talk about racism does not mean it isn’t at play. Indeed, this silence is one of the ways that racism is manifest, for it is an imposed silence” (81). She discovered that people of color who’ve tried to talk about racism with their friends or coworkers were met with defensiveness or had their experiences invalidated, “so they stopped sharing their experiences” (81). To this point, DiAngelo again warns, “If racism is not a topic of discussion between a white person and a person of color who are friends, this absence of conversation may indicate a lack of cross-racial trust” (81).

White power is the American norm so any time it is spotlighted, “white norms are violated,” according to DiAngelo (86). Most white Americans would agree that white power, segregation, and racism are wrong and need to be done away with, “but unequal power relations cannot be challenged if they are not acknowledged. While it isn’t comfortable for most whites to talk about racism, we must do so if we want to challenge—rather than protect—racism,” writes DiAngelo (86).

But the crux for understanding this compelling book is found in DiAngelo’s definition of White Fragility:

White fragility is a state in which even a minimum amount of racial stress in the habits becomes intolerable, triggering a range of defensive moves. These moves include the outward display of emotions such as anger, fear, and guilt and behaviors such as argumentation, silence, and leaving the stress-inducing situation. These behaviors, in turn, reinstate white racial equilibrium. Racial stress results from an interruption to what is racially familiar. These interruption can take a variety of forms and come from a range of sources…” (103)

DiAngelo goes on to list a myriad of emotional signals associated with this fragility. There are numerous excuses and evasive techniques often used to avoid dealing with racism head-on. One of her most compelling examples occurred during a workplace anti-racism training she co-facilitated.

When a white participant was given “sensitive and diplomatic feedback on how some of her statements had impacted several of the people of color in the room,” she took it as a false accusation of having a racist impact. Her colleagues alerted the training facilitators that she was experiencing a potential, but literal, heart attack as a result of the feedback she received. “All attention was immediately focused back onto her and away from engagement with the impact she had had on the people of color” (111).

White Fragility is a tool to put anyone who wants to challenge racist norms, on the defensive. DiAngelo considers it “a form of bullying; I am going to make it so miserable for you to confront me—no matter how diplomatically you try to do so—that you will simply back off, give up, and never raise the issue again” (112). She also believes it to be a sociology of dominance, “an outcome of white people’s socialization into white supremacy” and a way to keep and reproduce white supremacy (113).

Dr. DiAngelo’s assessment of the black experience with white fragility is a truism for many: “People of color cannot avoid understanding white consciousness to some degree if they are to be successful in this society, yet nothing in dominant culture affirms their understanding or validates their frustrations when they interact with white people” (xv).

Overall, “White Fragility” is not a book written to bash white people. Dr. DiAngelo’s intentions are to draw attention to the ongoing contributing factors that divide our society. For a country that many people claim to be a “Christian nation,” this book proves timely and worthwhile for anyone—particularly white people—seriously considering a path to greater unity.

Dr. Robin DiAngelo urges agents of peace interested in breaking the norms of whiteness—“the conditioning that makes white people apathetic about racism and prevents us from developing the skills we need to interrupt it”—to find out for themselves what they can do (she lists several historical and sociological resources for further study on the subject). “Break with the apathy of whiteness,” DiAngelo urges, “and demonstrate that you care enough to put in the effort” (144).

Timothy Thomas is a full-time public school teacher and coach. He is a staff writer for Christ and Pop Culture and lives in Fort Worth, Texas. He and his wife, Angela, are devoted to encouraging, informing, and challenging Christians to engage the culture with a gospel-centered focus.