labor Nixon Strikes a Blow for Labor: Why Returning Public-Sector Workers the Right to Strike, as a Last Resort, Makes Sense

Cynthia Nixon, who is challenging Andrew Cuomo for the Democratic nomination for governor, has called for eliminating the strike ban for New York State public workers. 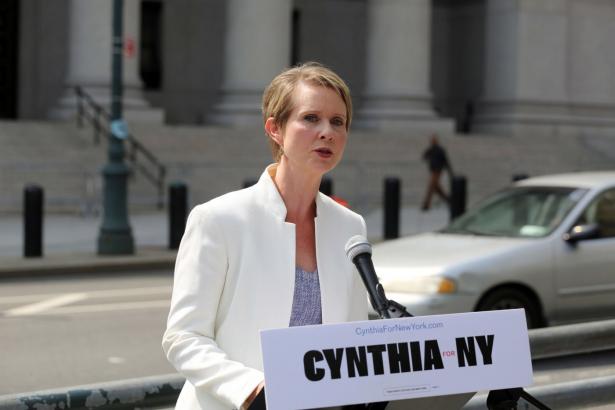 Since 1947, it has been illegal for public workers in New York State to go on strike, first under the Condon-Wadlin act, which called for strikers to be fired, and after 1967 under the Taylor Law, which penalizes them two days pay for each day off the job.

Now Cynthia Nixon, who is challenging Andrew Cuomo for the Democratic nomination for governor, has called for eliminating the strike ban as a way to strengthen unions in the face of fierce legal and political assaults.

No one likes strikes, especially ones that disrupt the lives of the public, but Nixon has a point. There is no reason why public employees should not have the same rights as privately-employed workers. In 1919, Massachusetts Gov. Calvin Coolidge crushed a Boston police strike in the name of defending the sovereignty of the state.

But such arguments have long been outmoded, as private-sector style labor relations have been imported into the public realm without undermining the power of government. Several states, including Pennsylvania, allow public sector strikes without the sky falling down.

New York unionists have long complained that the Taylor Law strips them of their most powerful weapon, the right to withdraw their labor. Complicating the situation is a provision of the law that says when public employee contracts expire, their terms will remain in effect until a new contract is signed. This protects workers when public officials and union leaders fail to come to an agreement, but eliminates the pressure to do just that.

Employers often simply wait unions out, not fearing a walkout. Mayor Michael Bloomberg allowed over 150 city labor contracts to expire by the time he left office. For workers, such rope-a-dope means decreased spending power as inflation eats away at their salaries. Meanwhile, without the right to strike, public employee unions turn to politics, mobilizing their resources on behalf of candidates with whom they may end up bargaining.

Strengthened public employee unions might drive up government labor costs, but they also will benefit workers far beyond their own ranks by setting higher benchmarks for wages and benefits and sustaining hundreds of thousands of middle-class families who live within New York State, paying taxes and spending money.

But if public employees do win back the right to strike, they had better be careful in using it. An inconvenienced public, unconvinced of the justice of a union's cause, can quickly turn on strikers. In 1971, at the height of union power, New York City workers who operated highway drawbridges and sewer treatment plants walked off their jobs to protest the state government veto of a new pension plan they had negotiated, creating massive traffic jams and foul-smelling waters.

The uproar was so great that the state Legislature took away the right of public workers to bargain over pensions, which they have never won back.

More modest changes in the Taylor Law, with or without an end to the strike ban, might end some of the frustration workers have with the current system. When a contract expires, for example, the law might require that workers be given cost-of-living increases until a new contract is signed, ending the financial incentive for public employers to stall bargaining. A system of penalties might be created for parties that fail to bargain in good faith.

Still, Nixon is right that workers should be able to strike if all other measures fail.

Freeman is a professor of history at Queens College, City University of New York.