Lawyers Turn to Activism as Civil Liberties Come Under Attack

A new generation of social justice attorneys has risen to defend against the hard-line policies of the Trump administration, from immigration and abortion access to voting and gender rights. 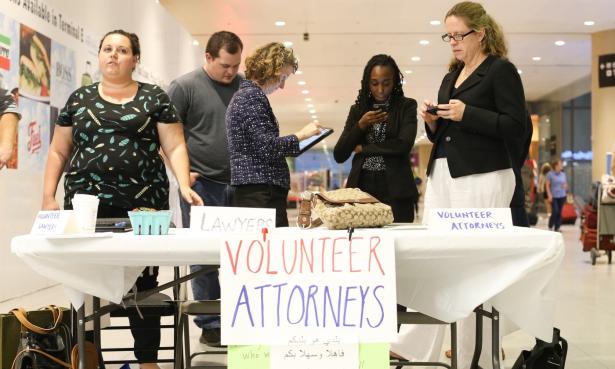 A third of more than 500 pre-law students said the results of the 2016 election influenced their decision to become lawyers., Keith Bedford/The Boston Globe via Getty Images

To train a new generation of lawyers to fight for the rights of immigrants after the 2016 elections, Claire Thomas started an asylum clinic at the New York City law school where she taught.

In Seattle, Michelle Mentzer retired five years early as an administrative law judge so she could volunteer as an attorney with the ACLU.

And in Texas, Anna Castro traded her full-time job for contract work so she could prepare to attend law school to better serve her community.

The country is seeing a wave of legal activism as attorneys and attorneys-to-be have risen to defend civil liberties from the policies of the Trump administration and an increasingly conservative judiciary.

“Sometimes the law is taken for granted, like the air we breathe, and it’s not until we are gasping for breath that we can appreciate it,” said Kellye Testy, president of the Law School Admissions Council. Testy had served for 13 years as law school dean at Seattle University and the University of Washington in Seattle. “It is the lawyers who are there defending liberty and there when nothing else is going to help.”

And a new generation of social justice lawyers has apparently been inspired. Flat since at least the start of the Great Recession, law school applications are up nearly 9 percent. The number of people taking the Law School Admissions Test (LSAT) through mid-July increased more than 23 percent over last year, according to the LSAC.

A third of more than 500 pre-law students said the results of the 2016 election influenced their decision to become lawyers, according to a survey by Kaplan Test Prep. “We need those young voices out there,” Testy said. “We need them to see that law can be a pathway to justice.”

It’s why Castro made the decision last year to step away from her full-time job to pursue a career in law. She had been working as communications director with Mi Familia Vota, a civic engagement organization, leading up to and after the 2016 election. As Trump’s policies have unfolded, she said, she wanted to explore other ways to effect the changes she knew would be needed in this country.

For her, this is also personal. Castro’s uncle, who like her parents came to the U.S. from El Salvador, was detained and died after being deported last year. “I believe that we need more movement lawyers who understand the power of organizing and how clunky the law can be as a tool without popular education, in order to change the course the country is in now,” she said.

Today’s legal uprising harkens back to important chapters in U.S. history, when attorneys used the law to advance important work for social change. Lawyers were the backbone of the civil rights movement in the 1950s and 1960s, defying herculean obstacles to register voters; defending and seeking justice for those falsely accused, and standing alongside crusaders and activists as they protested in the struggle for social justice.

Lawyers partnered with labor to help improve conditions for American workers, and female lawyers led the progress on gender equality, including some who were denied admission to law school based on gender.

The LSAC and the LSAT were started seven decades ago, Testy said, “because law school admission was based on gender, or race, or religion or which college you attended or who your parents were and not individual merit. Schools came together to form a better way to assure quality and fairness.”

President Trump’s election triggered heightened concern over the erosion of civil liberties on multiple fronts—from the Muslim ban and abortion access to voting and gender rights. His administration has quietly undone much of President Obama’s criminal justice reform legacy, replacing it with a more draconian vision of law enforcement.

There’s growing worry that the president of the United States is undermining the rule of law. So, increasingly, balance of power will have to rely on strong judiciary processes. And that takes a lot of lawyers, on both sides of all issues and rigorous testing in the courts.

Shortly after the election, Lawyers for Good Government mobilized 125,000 lawyers, law students, and activists nationwide, with the goal of defending democratic institutions and resisting “abuses of power and corruption.” Among their many actions was a disciplinary complaint with the Alabama State Bar Association against U.S. Attorney General Jeff Sessions for perjury.

And the migrant crisis on the Mexican border sparked activism among a group of women lawyers who formed Lawyer Moms of America. In addition to engaging lawmakers, they are collecting airline miles and hotel points, and raising money to bring separated families together. The group’s 17,000-member roster of men and women, moms and non-moms continues to grow, co-founder Erin Albanese said.

Legal activism gained momentum in January 2017 when armies of lawyers showed up at airports.

Legal activism gained momentum in January 2017 when armies of lawyers showed up at airports after Trump’s Muslim travel ban stranded thousands of people around the world.

That spectacle  inspired Eric Sproull to return to the practice of law after a decade-long hiatus. Sproull had been a lawyer in Chicago—representing minors in juvenile court in Cook County and volunteering and later working part time at a neighborhood clinic in Chicago. In 2006, he took leave to develop a career as a composer and music producer in Ann Arbor.

Trump’s animus toward immigrants was clear from the start.  He claimed that Mexico was sending rapists and murderers, and he pledged to bar Muslims from entering the country. His immigration policies have led to widespread deportations and family separations. And immigration law is where lawyers have been most active.

An adjunct professor at New York Law School, Claire Thomas is training the next generation to practice immigration law—but in a holistic way, she said. She recalled the day after the election when teary-eyed students, many of them immigrants, people of color, and LGBTQ, spoke about the fear of seeing their rights and that of their families weakened under Trump.

Right away, Thomas began hatching a plan for a clinic to train these students to become immigration lawyers. “My goal was that law students wouldn’t have any type of lifesaver complex, but would appreciate that clients’ lives are complex; and that while we are going to do everything we can for them as lawyers, we are also going to work with social workers and others who can help get them on a path to permanency and stability here in the United States.”

Her inaugural class was full. The clinic lasts an entire academic year, not just one semester as other clinics do, so students can see a case to the end—as much as that’s possible, she said, because little is predictable under this administration.

Amid DACA uncertainty, stricter requirements for those seeking asylum, and stepped-up deportation, the students have no shortage of cases. Thomas teaches her students how to find help for their clients among a network of service providers, from public assistance to mental health counseling. And “as the dumpster fire of the world burns brighter,” she said, she tries to make sure they understand the concept of vicarious trauma and the importance of self-care.

Word of an immigration raid affects everyone, clients as well as students—more than half of whom come from immigrant backgrounds. “They are fearful for their clients but also for themselves and their families,” she said.

“I would never have imagined that immigration laws could be used as a weapon.”

As founder of Watson Immigration Law in Seattle and a British immigrant with Bangladeshi roots, Tahmina Watson understands that fear from both sides.

She served on the immigration working group for Hillary Clinton’s campaign and believed Trump’s campaign promises to get tough on immigrants were not just talk. After the election, Watson asked the local chapter of the American Immigration Lawyers Association to allow her to create a committee to respond to what she knew would be coming.

When the Muslim ban hit in January 2017, she helped lead the immigration lawyers’ response at the airport in Seattle and was part of a small team that created a web-based application for stranded immigrants trying to come home.

In July, she spearheaded the launch of a political action committee to fund the campaigns of South Asians seeking public office. And later, as migrant family separations on the Mexico border spiraled, she led the creation of another organization, Washington Immigrant Defense Network, combining the experience and skills of nonlawyers as well as immigration lawyers and non-immigration lawyers to provide free defense.

Watson and her fellow immigration lawyers are at the center of the maelstrom in the president’s hardline on immigration, as new policies and reinterpretation of old ones—most unseen by the public—have upended people’s lives. Prosecutorial discretion and other forms of relief available under President Obama are essentially off the table now.

It’s not lost on Watson as a Muslim and a naturalized U.S. citizen that, for all the tools the law provides, Trump’s policies can still leave her and others like her as vulnerable as their clients.

“I would never have imagined that immigration laws could be used as a weapon for creating chaos and fear, for curtailing due process, and inflicting human rights abuses,” she said.

“The ACLU has been at the forefront in preserving our democracy.”

“It is crucial to recognize that this administration has plans to dismantle democracy as we know it,” she said. “Education, health care, climate change, public lands, social security, LGBTQ rights, women’s rights. And watch out for their attempt to reverse Roe v. Wade,” she said.

In the months after the 2016 elections, donations poured into legal organizations such as the ACLU as the work they did in defending and preserving Constitutional freedoms became even more vital.

It was why Mentzer, an administrative law judge in Seattle, decided to retire early and, in December 2017, was “writing letters to the ACLU, asking, “Can you use me?”

Before joining the Washington State Office of Administrative Hearings, Mentzer was a social justice lawyer, representing farm workers in Washington’s Yakima Valley and unions in Seattle.

“The ACLU has been at the forefront in preserving our democracy and protecting the rights of those under attack, the LGBTQ communities and immigrants,” she said.

Mentzer is also politically engaged, working to help progressives flip a conservative seat in the district near her hometown of Bellevue, Washington. It’s important to have voices of courage willing to stand on the right side of democracy at every level of government, she said.

“It’s a constant mental exercise to feel knocked down and to pick yourself back up again, with an eye toward the positive arc of progression,” she said. “This election was the last gasp of the older white male. Demographics are on our side, and we have to keep reminding ourselves of these things.”

Lornet Turnbull wrote this article for YES! Magazine. Lornet is an editor for YES!, a Seattle-based freelance writer and a regional anchor for the Washington Post.  Reach her at lturnbull@yesmagazine.org.