labor Low Wages And No Stability: How Amazon’s Use of Perma-Temps Is Hurting Workers

The national unemployment rate hit 3.8 percent in May and companies across the country are complaining about the difficulty of finding workers. Yet Amazon has been able to staff its warehouses with low-paid part-time workers. 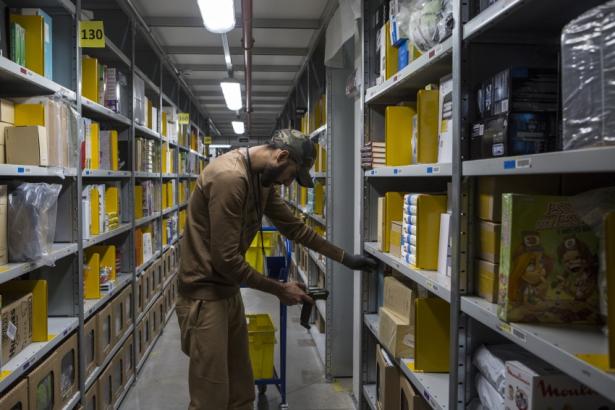 Across the U.S., Amazon warehouses are capitalizing on depressed areas to boost profits. , Emanuele Cremaschi/Getty Images

Every day at 4:30 a.m., Dwayne Wilson, 25, wakes up to find out whether he’s going to be needed as a forklift driver at the warehouse he works at in the Los Angeles neighborhood of Wilmington. Sometimes he gets a call telling him not to come in. Sometimes he goes in to find out that he’s not needed that day. On average, he works just three eight-hour days per week, at $15 per hour.

“Even if I work every day and I have an amazing work ethic,” Wilson says, “I still could be sent home after waiting for so long because they fill the spot.”

The products that Wilson moves are destined for Amazon customers, but Wilson doesn’t work directly for the e-commerce giant. He works for California Cartage, a logistics company that has a contract to unpack shipping containers full of Amazon goods. Wilson says that the majority of the cargo moving through his warehouse is headed straight to Amazon fulfillment facilities.

The national unemployment rate hit 3.8 percent in May, the lowest level since 2000, and companies across the country are complaining about the difficulty of finding workers. Yet Amazon has been able to staff its warehouses with workers who frequently earn little more than the local minimum wage. Many of them are contingent workers like Wilson, who get none of the stability and benefits that often come with working for one of the country’s largest companies.

Amazon has been able to keep finding workers for its warehouses—and keeping wages low—in part by tapping into areas where the economic recovery has been weak. New Jersey and California contain two of the largest numbers of Amazon fulfillment facilities in the United States.

In 2012, Amazon opened a warehouse in San Bernardino, Calif., a city about 70 miles east of Wilmington. San Bernardino has a per capita income of $14,922 according to the latest American Community Survey in 2016, less than half the national average of $29,892.

San Bernardino didn’t regain the number of jobs it lost in the recession until 2015, according to the Bureau of Labor Statistics. Amazon, on the other hand, recently released figures showing profits of $2.5 billion for the last quarter, the third consecutive quarter the company produced a profit of more than $1 billion.

The 2016 per-capita income of Carteret, New Jersey, another port city where Amazon opened a warehouse, is $24,926. On the whole, New Jersey’s recovery has been slower than California’s. The state didn't gain back the number of the jobs it lost during the recession until 2016.

Wilson left a better-paying job in the warehouse of an animal pharmaceutical manufacturer in Omaha, Neb., to move in with his mother who was living on disability in Long Beach and needed his support. In California, the two live together in a two-bedroom apartment where they pay $1,400 per month. Wilson initially began working at California Cartage because it was the easiest job he could get with his background in warehouse work.

Wilson’s situation could improve if he gets a job working directly for Amazon. But he faces long odds, not to mention that Amazon workers don’t have it easy either. A report from the Institute for Local Self-Reliance showed fulfillment centers often pay less than the industry average for comparable work.

Sheheryar Kaoosji, an organizer at the Warehouse Worker Resource Center, an Inland Empire-based worker center, says that the demand for Amazon jobs in the area is so high that it’s often a challenge for workers who are hired on a part-time basis to secure a regular full-time position. Those part-timers are often not told what time their shift begins until two hours before they’re expected to show up.

“Those workers have to hustle to try to take every opportunity they’re given,” Kaoosji says. “If they pass something up. If they say, hey, I can't make it this day, they're much less likely to actually get that permanent position.”

Even when workers do get hired by Amazon, those jobs don’t necessarily last.

“Often we have folks who stick around after the Christmas rush, and they get laid off because Amazon—especially compared to a lot of companies—they have a really, really exaggerated kind of seasonal hiring,” says Kaoosji.

Wilson’s job is characteristic of many workers in the lowest rung of the logistics industry, which is increasingly being propelled directly or indirectly by Amazon. Both in Amazon facilities, and even more so in warehousing centers that handle Amazon freight, a large part of the workforce is often part-time or contingently employed through staffing agencies.

Northern New Jersey exurbs like Newark and New Brunswick are logistics hubs with a high concentration of “perma-temp” positions—where a temp agency connects workers to the same job at warehouses on a consistent basis. Carmen Martino, a labor studies professor at Rutgers, says it’s common for temp agencies to pop up in neighborhoods with a high concentration of immigrant workers where the per-capita income is low.

“Actually, some years back, we mapped wherever the staffing agencies were located in proximity to where the workers lived,” Martino says. “And you can see in places like New Brunswick where the agencies were like a picket fence, right around the highest concentration of immigrant workers.”

Meanwhile, workers like Wilson, stuck under these conditions, continue to work with no benefits and unstable hours, while companies like Amazon see their profits increase with no end in sight.

[Max Parrott is a New York-based writer and reporter.]

Working In These Times is dedicated to providing independent and incisive coverage of the labor movement and the struggles of workers to obtain safe, healthy and just workplaces.