books A Postcard from Ursula LeGuin

An homage to the then recently deceased, superlative science fiction writer who encouraged the author, an apprentice novelist adrift in the publishing world, to be a better reader as well as an accomplished scribbler of exemplary fiction. 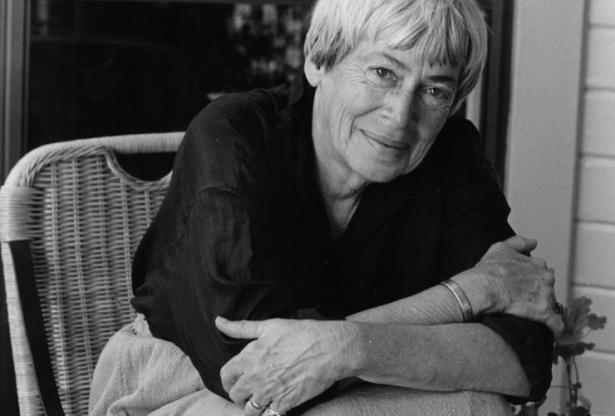 In 1973, when I finished my first novel, the difficulties of the blurb-solicitation process were enormous, or would surely seem so to writers now who send digital files effortlessly to famous people through websites and email. The great new advance then was the Xerox machine; you at least didn’t have to produce carbons (hopeless) or photostats (expensive) to send out. But still, as often as not—or more often than not—your solicitations weren’t responded to, which could seem like a foretaste of failure: perhaps readers wouldn’t respond either. Now and then a query would get a curt reply asking that the manuscript not be sent, that the recipient didn’t read such submissions.

For my first novel, I received a hand-written postcard from Ursula K. Le Guin welcoming me to the fold.

I once sent a large manuscript to Anne Rice, the vampire biographer­. What I got back was a postcard, filled edge to edge with typing, asking why I felt I had a right to send her this mass of paper, did I really think she had any reason to read it—she did not—and what was she supposed to do with it? I thought of writing her back to say that she might just toss it in the trash with the rest of the week’s paper, but I didn’t.

So for that first novel, I was amazed and grateful to actually get a few brief comments back. The one that meant the most to me, for several reasons, was a hand-written postcard from Ursula K. Le Guin. It was generous, kind, even humorous—the note ended with ironic congratulations on my impressively consistent misspelling of the word “guard”—and as a whole, the effect was her welcoming me into the fold.

Le Guin’s later notes of encouragement were constructive, and her novels, more than any others, awoke in me the deep delight of invention for its own sake. When news of her death came this past January, I was reminded of that first postcard. In my chaotic archive, I found other letters from her, more than I remembered getting, but not that first one.

I hadn’t set out to be a science fiction writer. When I began, I didn’t know much about Le Guin’s work, but I knew enough to choose Rocannon’s World (1966), the first of the great series of novels and stories within what can be called the Hainish mythos: tales of the galactic consortium established over countless centuries by explorers and colonizers from the planet Hain.

The Hain are the originals of all human-like people, including us. This earth (Terra) is a Hainish colony, though for long periods it was divorced from the league, during which our familiar history took place. Far in the future it will rejoin the Ekumen, as it will be called: the whole household of Man. We are all Hain.

Rocannon’s World appeared as one-half of an Ace Double, a funny fashion of the period (Le Guin called it “the late Pulpalignean era”) whereby two short books were made into one. The reader, when finished with the first book, turned the book over and upside-down and got a new cover and a different book.

Rocannon’s World richly conveys a young author’s delight in pure invention. It tells the story of a returning explorer, Rocannon, who long before (but long after Hainish settlement) came to a nameless planet whose varied populations, or “hilfers” (highly intelligent life forms), need re-evaluation. There are warrior-kings and castles and swords, the winged cat-like “windsteeds,” the gnome-like Clay people, and the lost jewel that means everything.

But Rocannon knows that the planet is under threat from enemies wielding destructive technologies the natives can’t comprehend. In rescuing them he loses his own means of leaving this planet, where now he will live and die a hero if not a god. It is the only science fiction novel whose end actually brought tears to my eyes; and it did the same in my recent re-reading.

Le Guin’s tone is democratic and demotic, yet grand, like the speech of a wise king of a small place. Such things can’t be learned; you can do them or you can’t.

Le Guin is a marvelous describer, of weather and landscape, skies and seas. Whereas J.R.R. Tolkien’s landscapes are charged with moral significance—good or evil, welcoming or forbidding—Le Guin’s landscapes and weather are just as we experience them in realist novels, but the differences large and small have profoundly altered the lives, customs, and biology of the inhabitants, and their feelings every day. Because the Hainish planets, including our own Terra, were chosen by the first explorers for their compatibility with Hainish natures, the seas and mountains, rain and wind, dawns and sunsets are mostly like ours, and they come alive in their rich specificity as characters experience them. Here for example is Rocannon, traveling the planet on the back of a “windsteed”:

During the next day’s flight the flat pampas gradually rose into low swells and rolls of land, vast waves on a quiet sea. High-piled clouds drifted northward above them now and then, and far ahead they could see the land tilting upward, growing dark and broken. By evening the mountains were clear; when the plain was dark the remote, tiny peaks in the south still shone bright gold for a long time.

Scenes such as this could be seen on many places on Earth, and described in the same strong, plain sentences. But then comes difference:

And then the person, who is filled with and moved by all of this:

Rocannon lay on his back and watched, through the high black stems of grass, the slow and radiant complexity of the lunar dance.

This is how invention and affect are knitted together in successful fantastic stories, and in Le Guin’s stories, the knitting flows easily from the mind and fingers. From her, I learned a tone, a tongue, and a way of making meaning from, or by, or with, the invention of nonexistent things. Hers is a tone that notices human ordinariness even in picturing weird extremities. It is democratic and demotic, yet grand, like the speech of a wise king of a small place.

If you are the sort of reader who tends to gather nice turns of language, things well achieved that seem easy but are not, Le Guin will provide. Here, for example, is the mad king of Karhide in The Left Hand of Darkness (1969): “His voice was thin, and he held his fierce lunatic head at an angle of bizarre arrogance.” And here, the powerful men of Orgoreyn who are looking at photographs of Terra and are skeptical of the Hainish ambassador’s claims: “The pictures passed around the table, and were examined with the noncommittal expression you see on the faces of people looking at pictures of somebody else’s family.” Such things can’t be learned; you can do them or you can’t.

I met Ursula only once or twice—we lived on different coasts—and though we kept up an intermittent correspondence, only a handful of postcards and letters have survived my possession. Most of them are about books of mine that publishers continued to send her. “The book is still filtering down through my emotional Melitta and I will have further reports later,” she wrote in May 1986. “I am moving about at present (am teaching for a month here at La Jolla, a lovely little beach-town halfway between Richard Nixon and Carlos Castaneda),” when she’d missed the manuscript of a story I’d sent for an anthology she was editing. “My batting average remains .000,” she’d written when I failed to get a grant that she recommended me for.

By 1993 she was asking me to forgive her for not blurbing a new book: “I have given out so many such quotes this year that I feel I will be perceived as a Universal Blurber if I do more—and it could backfire too—‘Her again?’—so I’m just not doing it for a year or so.”

She had done enough by me, certainly. And of course those endorsements persist, from edition to edition, hardback to paperback, in multiple languages. It is perhaps not like having her in some sense always near; but then again, that is just what it is.

[Essayist John Crowley is the author of Little, Big and the Ægypt cycle. Additional contributions of his to Boston Review are available HERE. He teaches at Yale University.]

All Boston Review content is available to readers without pay walls, though it encourages readers to support it financially. Information on donations is available HERE