Trump is a threat, but so too are the right-wing ideologues who surround him imposing a form of efficiency to implement their agendas. We should fear Trump, and we should fear the oped author. Both are dangerous. 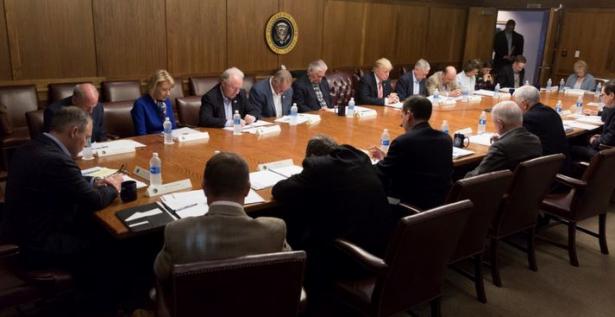 President Donald J. Trump, joined by Vice President Mike Pence and members of the Cabinet, are seen in prayer prior to the start of their Cabinet meeting, Saturday, September 9, 2017 in Laurel Lodge at Camp David near Thurmont, MD.,Photo: Shealah Craighead/White House // Common Dreams

What's more troubling: That the grotesque liar and right-wing narcissist Donald Trump was elected by the American people to be President of the United States in 2016? Or that there is now apparently a secret cabal of unelected right-wing officials inside his White House—at least according to a New York Times op-ed published Wednesday afternoon—that is actively undermining his presidency from within and their own discretion?

"Proponents of healthy, civilian-rule democracy should not be encouraging or celebrating secret, independent military insubordination as a response to reckless/illegal executive overreach. It sets a precedent that is ripe for abuse." —Reed F. Richardson, journalist"I work for the president," the op-ed writer, controversially provided anonymity by Times, confesses, "but like-minded colleagues and I have vowed to thwart parts of his agenda and his worst inclinations."

The explosive admission detailed in the column, if true, would be historically unprecedented: someone described by the paper as a confirmed "senior official in the Trump administration" openly admitting to the American public that there is a coordinated effort afoot to sabotage the prerogatives—horrible and offensive as they might be—of the democratically-elected president they have been hired or appointed to serve.

The individual behind the op-ed is clear that the efforts of those opposing the president "is not the popular 'resistance' of the left," but rather right-wing operatives concerned that  Trump's "amorality"—as they alone define it—is a threat to their perceived notions of what good governance should be.

In response to its publication, Trump called the person responsible "gutless" and White House press secretary Sarah Huckabee-Sanders in a statement called on the author to quit immediately.

"The individual behind this piece has chosen to deceive, rather than support, the duly elected President of the United States," she said in a statement. "He is not putting country first, but putting himself and his ego ahead of the will of the American people." She added, "This coward should do the right thing and resign."

Later, in a tweet, Trump called on the Times, citing "National Security purposes", to "turn him/her over to government at once."

But while some on the progressive left were championing the anonymous author for taking a brave stance against an "unhinged" president (or the "mad king"), others expressed deep concern about the implications of the op-ed. 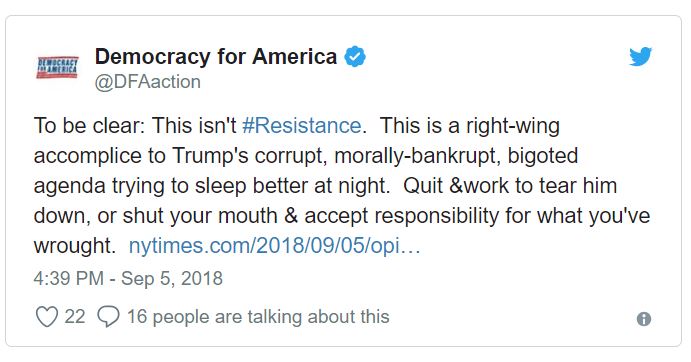 In his assessment—in which he called the irony of the op-ed "glaring and massive" and also described the author as a "coward"—journalist Glenn Greenwald pointed out that while "Trump may be a threat" in his own right, "so is this covert coup" that seeks to impose its "own ideology with zero democratic accountability, mandate or transparency." 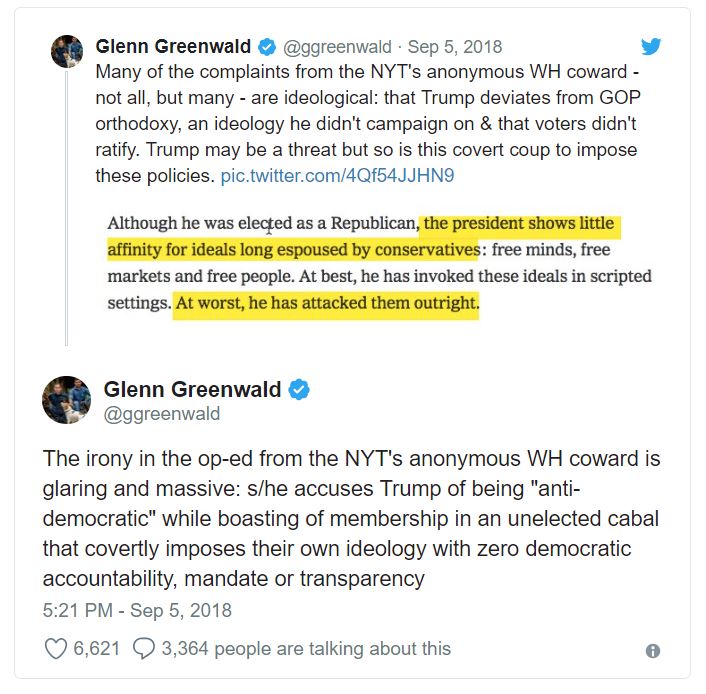 Progressive journalist and media critic Reed F. Richardson agreed with Greenwald's sentiments and concerns, writing on Twitter, "Proponents of healthy, civilian-rule democracy should not be encouraging or celebrating secret, independent military insubordination as a response to reckless/illegal executive overreach. It sets a precedent that is ripe for abuse." 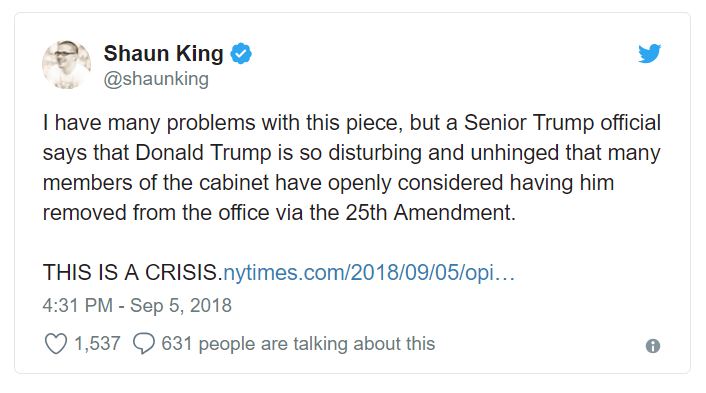 However, another left-leaning journalist, Jordan Chariton, put it this way: "If senior officials feel the country is in peril, they need to put their name to it and invoke the 25th amendment... [the Times] allowing a senior official to do anonymous op-ed (may not even work in actual White House) is essentially gossip."

And finally, as political activist and writer Ben Spielberg explained about why so-called "Never Trump" Republicans—like the author of the op-ed appears to be— should simply not to be trusted. "An enemy of your enemy is not always your friend," warned Spielberg. "This is something everyone who considers themselves part of the #Resistance would do well to remember."