The huge spike in the cost of a college education has had a devastating effect upon educational opportunity. American student loan debt now totals $1.5 trillion. 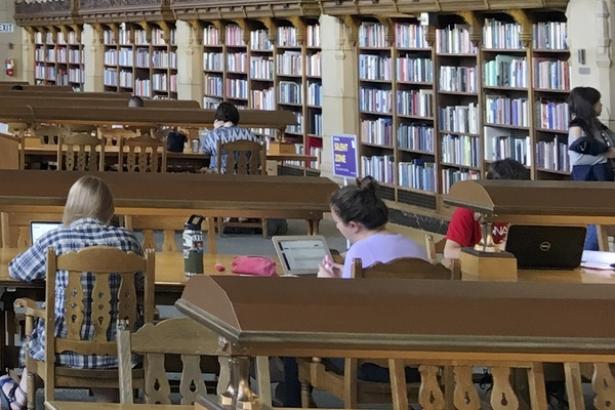 Despite the soaring costs of attending American colleges and universities, their students are receiving an education that falls far short of the one experienced by earlier generations.

The sharp increase in costs is clear enough. Between 1978 and 2013, American college tuition rose by 1,120 percent, and became the major source of revenue for higher education. Traditionally, most public colleges and universities had no tuition or very low tuition. But, faced with severe cutbacks in government funding from conservative state legislatures, these public schools adopted a tuition system or dramatically raised tuition. Today, at the University of California/Berkeley (which, like the rest of the University of California system, was tuition-free until the 1980s), the total yearly cost for tuition, room, board, books, and related items is $36,015 for an in-state student and $64,029 for an out-of-state student. At the State University of New York/Albany (which, like the rest of the SUNY system, was tuition-free until 1963), the total annual cost for an in-state student is $26,490 and for out-of-state student is roughly $43,000.

This huge spike in the cost of a college education has had a devastating effect upon educational opportunity. Unable to afford college, many young people never attend it or drop out at some point. Studies have found that the primary reason young people cite for not attending college is its enormous cost. Many other young people can afford to attend college only by working simultaneously at paying jobs (which pulls them away from their studies) or by running up enormous debt. It is estimated that three out of four recent college graduates have borrowed to cover their college costs, incurring a debt averaging nearly $40,000 each. As a result, American student loan debt now totals $1.5 trillion. Coping with this enormous debt, plus substantial interest, constitutes a very heavy burden for the 44 million Americans who bear it. All too many of them either default on it or give up on their dreams for post-college careers and, to pay it off, settle, reluctantly, for working at jobs they dislike.

Meanwhile, on campus, education is deteriorating. Those young people who can still afford to attend a college or university are increasingly being deprived of a broad liberal arts education (in which they have the opportunity to consider what life is all about and what it might be) and channeled, instead, into narrow vocational training programs. This June, the American Association of University Professors issued an appeal calling for the protection of the liberal arts in higher education. Why? Politicians like Governor Rick Scott of Florida have proposed singling out liberal arts majors―students he apparently considers particularly unworthy of public education―and charging them higher tuition at state universities. Governor Scott Walker of Wisconsin has proposed dropping the goals of “search for truth” and “improve the human condition” from the University of Wisconsin’s mission statement and substituting: “meet the state’s workforce needs.”

Also, many students are taught in vast lecture halls and have little or no access to faculty members with whom they can discuss their coursework, interesting books or ideas, or the possibilities of attending graduate or professional school. Thanks to administrative efforts to dispose of tenured and tenure-line faculty, adjunct and other contingent faculty now constitute 76 percent of the nation’s college teachers. As these underpaid, rootless individuals are often little more than evanescent ghosts flitting by on campus, there are few opportunities to meet with them―if there is even a place to meet with them. And student contact with human beings will be further reduced in the future, as MOOCS (massive online open courses) are substituted for courses taught in classrooms―classrooms that once gave students the opportunity for a face-to-face discussion with their teachers and other students.

The mistreatment of students is most advanced at America’s for-profit colleges and universities. These private enterprise institutions, often owned by giant banks and investment firms, underwent a surge of growth that started in the 1970s and probably reached its peak from 2007 to 2009, when they numbered nearly 1,000 and could boast about 2.4 million students. Enrolling large numbers of first generation, low-income college students, they became notorious for deceptive student recruitment practices, misleading claims about program credentials, high student debt and default rates, and inferior educational and employment outcomes.

The largest for-profit school, the University of Phoenix, which claimed an enrollment of 600,000 in 2010, incurred numerous government fines and payments to students who sued it for shady admissions and educational practices. By 2017, its enrollment (like that of its for-profit counterparts) had declined substantially. Nevertheless, it continues operations today, with 95 percent of its faculty teaching part-time, adjuncts receiving approximately $1,000 to $2,000 per course, and student debt totaling $35 billion―the highest in the United States.

Corporate investors in the for-profit university system can take heart at the election of Donald Trump, who himself founded a for-profit educational entity, Trump University, an operation that ultimately cost him $25 million to settle lawsuits for fraudulent practices. Betsy DeVos, his choice for U.S. Secretary of Education, scrapped two Obama-era government regulations for the industry during her first months in office. The first of the regulations she eliminated cut off U.S. government funding to programs that performed poorly, and the second made it easier for students defrauded by for-profit schools to wipe out their loan debt. DeVos also appointed a former administrator at a for-profit university―DeVry University, previously heavily-fined by the federal government for fraudulent operations―to police fraud in higher education.

Surely America can do a better job of providing educational opportunity for its people.

Dr. Lawrence Wittner (http://www.lawrenceswittner.com) is Professor of History emeritus at SUNY/Albany. His latest book is a satirical novel about university corporatization and rebellion,What’s Going On at UAardvark?