Where Hands Touch focuses so much on the idea that love can traverse any boundary that it forgets there’s no love strong enough to bridge a genocide. 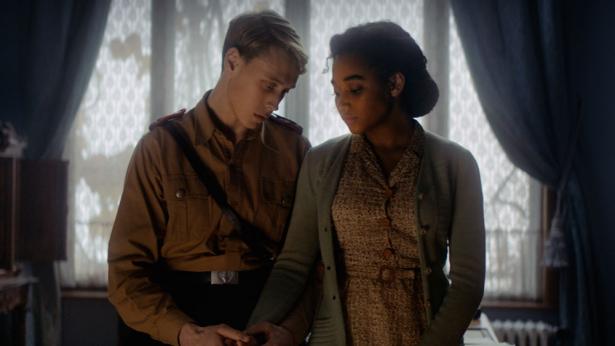 What counts as “humanizing a Nazi?” It’s a question that will be debated quite a bit as director Amma Asante’s new film Where Hands Touch continues its press tour in the coming weeks (it hits theaters September 14), and it’s one worth asking and answering in good faith, considering the recent resurgence of Neo-Nazi ideology in the public sphere. Even though Asante defended the immediately controversial film when its premise was originally reported—a biracial black teen in Nazi Germany falls in love with a member of the Nazi youth—the pre-emptive concerns were valid: Asante’s latest does not come anywhere close to justifying its own existence.

Technically speaking, the film is pristine. The cinematography is appropriately claustrophobic, full of tight shots in small spaces, and it is excellent at invoking the ever-encroaching danger of the Nazi regime. It is also quite well acted, with an admirable performance from Abbie Cornish as Kerstin, the white mother to a black child she loves and is desperate to protect. Amandla Stenberg’s Lenya has strong moments, most especially when she digs deeper into her mother’s past in an attempt to discover how she came to exist in the world as a “Rhineland bastard” and reconcile what that will mean for her own sense of identity.

THE ACKNOWLEDGED RACIST IS THE CHARACTER WITH THE MOST DEPTH AND CHARACTER DEVELOPMENT.

But the standout performance is clearly George MacKay’s Lutz as the Nazi youth who Lenya falls in love with, which isn’t a problem in and of itself so much as it is an indication of where the film strays from what might have made it into the decent, affecting film Asante was clearly aiming for. It’s a similar problem to Jodi Picoult’s 2016 novel Small Great Things; the acknowledged racist is the character with the most depth and character development. Lutz’s face is riddled with the acne of a boy whose body hasn’t quite yet settled into puberty and it emphasizes his youth. It’s not surprising that the film guides the viewer to see him as a victim of his place in history; a boy whose crime is simply that he believes what he has been taught.

MacKay’s Lutz accidentally bumps into Lenya on the street near the start of the film, bruising her face. For reasons we later discover have to do with his Nazi father’s secret love of jazz music, he takes an interest in her and soon makes a habit of following her around the city as they strike up a romance, secretly escorting her back and forth to the safety of her home. Lenya and Lutz’s scenes together are touching and sweet; their ill-fated romance is for the most part believable. But this is exactly the problem. Lutz is not simply any German boy required by law to join the Hitler Youth. He is the son of a prominent SS officer and a few mere degrees from the center of power. It’s difficult to invest in their teenage love affair without the constant spectre of his political affiliations looming overhead or to forget that he is actively training to participate in an ethnic cleansing that threatens her life as they tenderly steal kisses in a hidden doorway.

The film does bring up interesting questions about complicity, totalitarianism, indoctrination and the conflation of race with national identity, but it doesn’t explore any of those ideas enough for them to be truly meaningful in this context. Part of the issue with the movie’s central romance is how utterly reasonable it seems. Teenagers meet, fall in love, and want to be together. There’s nothing particularly radical about that until you put them on opposite sides of a genocide. Never mind that the film never bothers convincing you that these two have any real chemistry or connection outside an anthropological curiosity of their differences.

Overall, the racial politics of the film are muddled at best. Lenya’s mother is desperate to insist on her daughter’s humanity, but Lenya herself seems more concerned with being acknowledged as German than with recognizing that even non-Germans should not be subject to the Reich’s vicious treatment. Lutz’s empathy extends only as far as his own erection; so much work is done to show that he wishes to exempt Lenya from the treatment meted out to Germany’s Jews that nothing is made of the fact that he still believes the Jews deserve what is happening to them. He remains complicit at every turn until it threatens Lenya directly, including when they encounter each other again in a concentration camp. When Lenya fantasizes about life in America after their first time having sex, Lutz informs her that they lynch black people and set them on fire over there thank you very much. Germany is obviously far superior. His feelings for her are sweet and genuine but there is nothing heroic or loving about a “one good Negro” policy.

WHY SHOULD RACIAL HARMONY REQUIRE THE GENERATIONAL ERADICATION OF BLACKNESS FROM HER IDENTITY?

At the end of the film, there is a postscript about the 25,000 black Germanswho were persecuted during the war, and the ones who survived to defy Hitler’s vision of a pure Aryan nation. It is nearly infuriating how much more interesting a story that focused specifically on the struggles of this oft-forgotten community would have been. There is an argument to be made that Lenya’s biracial identity is essential to the story; her eternal struggle is between her visible and phenotypic blackness and the limited protection of her mother’s whiteness. But the “crime” of her mixed-race identity becomes the platform for some questionable suppositions about the power to miscegenate the world out of racism when Lenya’s romance results in a pregnancy, just as her mother’s did. Her child is presented as a triumphant way to repair the mistakes of her mother before her and a victory against Hitler’s policy of forcibly sterilizing black Germans: this mixed baby will show the world what she could not. That is an irresponsible thing to suggest or hint at, especially considering that three quarters of her child’s parentage will be Aryan. Why should racial harmony require the generational eradication of blackness from her identity?

While expertly made, the film fails because it refuses to meaningfully acknowledge the basic truth of the terrifying power dynamics between the two lovers. Lenya and Lutz are careless about being seen together and their close calls are portrayed as being equally dangerous for him as they are for her. Lenya is never shown to be appropriately cautious of interacting with him or even reasonably afraid of his intentions or of how their romance puts her and her family at risk. It strains credulity that a black girl in Nazi Germany whose identity papers are constantly a matter of concern wouldn’t have a more immediate awareness of the constant danger she faces, even if she’s only 16. Where Hands Touch focuses so much on the idea that love can traverse any boundary that it forgets there’s no love strong enough to bridge a genocide.