Renowned social historian and scholar Nell Painter went back to school to study art after retiring from her tenured professorship. This book is the story of how she found herself anew, and what the search can teach the rest of us. 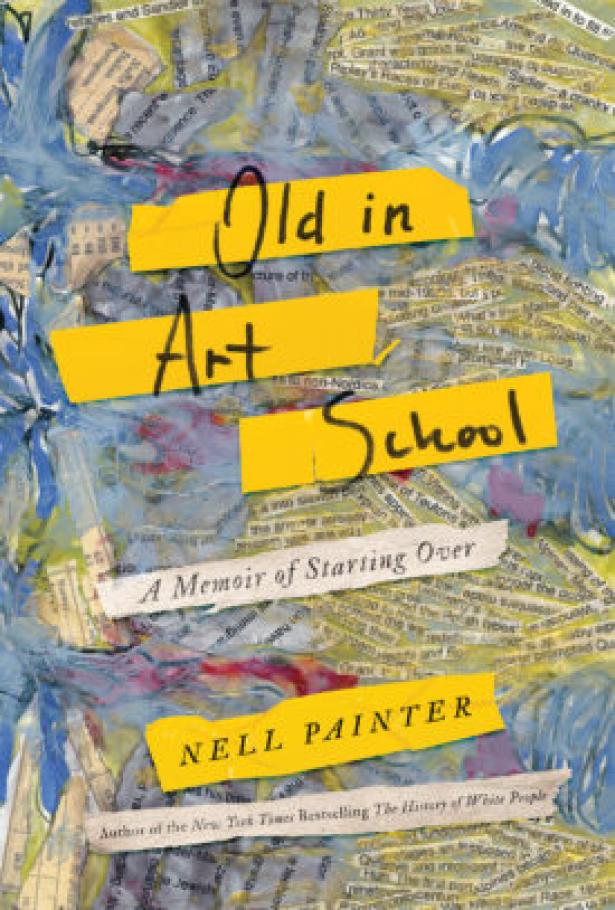 A Memoir of Starting Over

For many years, I have admired and recommended the works of the brilliant African-American historian Nell Painter. She joins such exemplary black historians as Darlene Clark Hine, Clayborne Carson, Peniel Joseph, David Levering Lewis, my UCLA colleagues Robin Kelley, Brenda Stevenson and Scot Brown, and many others who have revolutionized our understanding of American history. Their books and articles have brought African-American lives and struggles into the narrative of our nation’s past and present, and they have powerfully informed my own efforts as a teacher and writer.

Of all Painter’s scholarly works, I have found “Creating Black Americans” the most useful to offer my undergraduate students. This extraordinary book features the works of scores of African-American visual artists—the same creative women and men I have taught and written about for many decades. What makes her book so remarkable is that she uses these artworks effectively to augment and enrich her account of the African-American experience throughout the centuries. Not surprisingly, as she notes in her memoir, very few of these artists figured in the art history she studied when she returned to art school.

I learned some time ago that she had retired from her Princeton University position as the Edwards Professor of American History, deciding to “start over” by returning to school for systematic art training. Earning a BFA from the Mason Gross School of the Arts at Rutgers and an MFA at the Rhode Island School of Design, Painter now “officially” joined the eminent artistic community she so effectively presented in “Creating Black Americans.”

It is not easy to return to school in later life. Painter became an undergraduate in studio art at age 64 after an astoundingly successful academic career. “Old in Art School” is a candid, engaging, insightful, critical and highly personal memoir of her studies both in undergraduate and graduate art school. I found it especially compelling because Painter is of my generation and because I have relatively close knowledge of art education due to my own long work in African-American art. Many of my students are undergraduates in studio art and several have gone on to MFA studies throughout the country. Moreover, three of the African-American artists I have written about, Toni Scott, Lili Bernard and Yrneh Brown, all returned to MFA studies in midlife, giving me similar insights to those in Painter’s odyssey.

Courage is the most pervasive and striking theme of the book. Becoming a student among peers who are mostly young and mostly white must be intimidating, even for a person with an international scholarly reputation like Painter. Early on at Mason Gross, Painter realized how much she stood out among the young, tattooed, smoking, often profoundly immature if talented young art students with different language styles, different musical tastes, and different clothing preferences. They saw her as, she acknowledges, “an old woman”—an old black woman. Returning to school, she encountered and overcame a triple marginalization. Her persistence and determination to become an artist was utterly remarkable.

As an undergraduate art student at Mason Gross, Painter also discovered the deep-seated biases of American art schools. As an accomplished intellectual, she was well acquainted with African-American and other figurative visual artists. Among her favorites were Alice Neel, Robert Colescott, Faith Ringgold and others who routinely combined outstanding technical skill with powerful social commentary. She hoped, at least in part, to follow in their footsteps using her own developing visual vocabulary and vision.

She expressed a desire to paint some of her older women scholar friends who wrote important books about serious subjects. Painter wanted to celebrate them in art, an entirely admirable objective for an “emerging” artist. As she perceptively writes, “[a]rt history offers relatively few depictions of old people, and very few of those are women.”

But teacher Stephen (respectfully, she identifies her instructors only with first names) emphatically objected: “Illustration! You can’t do that.” Painter understood what that really meant. She realized that art—good art included—can never be detached from the real world and its social, political and economic contexts. Teacher Stephen’s objection was sexist and ageist.

Even more deeply, his objection that her desire to paint her friends was “mere” illustration reflected the foolish elitism that often pervades formal art education in the United States. The appellation “illustration” is dismissive, suggesting that it is a lesser form than “real” art. Whether teacher Stephen realized it or not, that term has been used often to disparage many artists who depart from the formal and stylistic orthodoxy of the moment.

It reflects a view that the celebration of people who have been ignored or marginalized by the dominant art world, including women, is an inferior use of creativity, unworthy of art school expression. Ultimately, his comment repudiates the democratic view that all creative visual forms, including painting, sculpture, cartoons, comics, murals, book illustration, quilt making, video art, graffiti, even tattooing and body art, and other unorthodox forms, especially when done well, are legitimate forms of artistic expression. Painter’s desire to paint portraits of older women scholars may or may not be “mere” illustration. That designation is irrelevant; what matters is that she wanted to paint her friends. In the process, whether she was aware of it or not, she could use art to contest a social stereotype of older women by depicting them with dignity.

Painter finished undergraduate school and entered the Rhode Island School of Design. There, her understandable sense of insecurity heightened. That is a typical feeling among MFA students: All of them are trying their best to impress their teachers and peers. Being a new graduate student in any field is replete with personal anxiety.

One of her RISD instructors, teacher Henry, made a devastating comment that temporarily threw her into a loop of insecurity, doubt, alienation and self-pity:

You may show your work.

You may have a gallery.

You may sell your work.

You may have collectors.

But you will never be an artist.

Her long record of professional achievement and her personal maturity enabled her to reject Henry’s thorough unprofessionalism. Younger students might take longer to recover, if at all. In my experience, Henry’s remarks, while not the norm, are far from unique in art education. I have heard this story all too often, and even more so from students of color and women. I would speak more harshly: He is not a teacher spouting bullshit; he is an asshole.

Notwithstanding such barriers, Painter completed the RISD curriculum and found the training useful in advancing her formal development as a visual artist.  There is no doubt that her ability to produce substantial work in many visual forms and to receive serious critical feedback from her instructors and peers enabled her to take her art to higher levels. Even the dreaded art school “crits” helped to push her to greater artistic achievement. In my experience, I have found that is invariably the case with artists who have sought and completed advanced formal training.

The most compelling and poignant feature of “Old in Art School” has little to do with the author’s academic art training or her emotional reaction to returning to school in old age. Rather, like many people in middle age or older, she had to simultaneously attend to her aging and infirm parents who lived across the continent in Oakland, Calif. This story is a recurring theme in the book.

Painter’s parents had been married for 70 years. When her mother, Dona, became ill, Painter made repeated trips to the Bay Area. Her mother went first, a peaceful death surrounded by loved ones. It took Painter’s full emotional resources to attend to the memorial service, cremation and her grieving elderly father—all while continuing her work as a returning art student 3,000 miles away.

Her father, Frank, proved to be more difficult. After Dona’s death, he fell into a depression, accusing his daughter of abandoning him. This was devastating to Painter. Her father worsened, and he retreated from his circle of friends. He complained constantly and she became resentful. Eventually, Painter and her husband moved him back east after she completed her studies, so that he could live out his final days in relative comfort. It is always hard on adult children when a surviving parent becomes excessively needy. Painter’s new status as a returning student only increased the stress.

But she is a remarkably strong and resilient woman. She finished her studies and was invited to do a studio residency at Gallery Aferro, a nonprofit, artist-run institution in downtown Newark where she lives. And she received an artist-scholar residency at Yale, where ironically she was rejected when she applied for the MFA program. She had another residency at the Newark Public Library, and one in Yaddo in Saratoga Springs, N.Y. In short, Painter is now a “real” artist, with an active professional life in her recently chosen field.

“Old in Art School” is richly illustrated with Painter’s artworks. At the age of 75, she will not be one of the “anointed,” like such African-American art stars as Kara Walker, Mark Bradford, Kerry James Marshall, Mickalene Thomas and a few others, all of whom are first-rate visual artists with justifiable international reputations. Many other African-American artists, of equal stature and quality, remain marginalized from mainstream critical acceptance and recognition. But Painter is fully aware, from her art school experience, that artists of color still experience racism and sexism. She knows that the black art stars anointed by the elite, affluent world of privileged white critics and tastemakers reflect the tokenism concealing the deeper racism that has pervaded the art world for centuries in America.

Her own work is engaging and often intriguing. She has earned the status of a professional artist. I imagine that I will use a few of her works in some of my future presentations of African-American art.

Above all, her book reinforces the message that people who are “old” in America’s youth-obsessed culture are not always ready to be discarded into the abyss of the geriatric ward. Few people, to be sure, can discover and pursue an entirely new profession in their 60s or 70s, much less endure the rigors (and the humiliations) of formal training in a new technical field. But many hundreds of thousands or more can continue to work productively in their chosen fields, improving their skills and contributing even more in their senior years. Painter’s inspiring story is a profound lesson for people of all ages and races in this increasingly multiracial, multicultural and multigenerational society in the new century.