Europe, China and Russia Move to Sidestep US Sanctions on Iran

The European Union, India, China and Russia are challenging the US effort to try to impose new Iran sanctions, pointing out that in reality it is the US, by tearing up the nuclear agreement, that is in breach of UN resolutions. 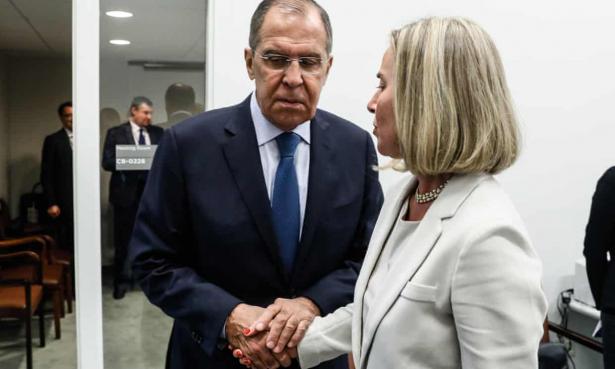 The European Union, Iran, China and Russia have set out a plan to sidestep unilateral US sanctions designed to cripple the Iranian economy and force the Iranians to renegotiate the nuclear deal signed in 2015.

European diplomats hope the proposed measure – known as a special purpose vehicle (SPV) – will help persuade an increasingly reluctant Iran to stay inside the deal in the hope of rescuing its economy.

Speaking on the sidelines of the UN general assembly in New York, Federica Mogherini, the EU external affairs chief, said the SPV was designed to facilitate payments related to Iran’s exports – including oil – and imports, so long as the firms involved were carrying out legitimate business under EU law.

The aim is to make the SPV available not just to EU firms but to others, she added.

In his address to the United Nations general assembly, Iran’s president, Hassan Rouhani, stressed Tehran’s continued commitment to the deal and accused the US of pressurising other countries into violating the nuclear agreement.

“Confronting multilateralism is not a sign of strength,” he said. “Rather, it is a symptom of the weakness of intellect. It betrays an inability in understanding a complex and interconnected world.”

But the US president Donald Trump’s secretary of state, Mike Pompeo, addressing an anti-Iran pressure group, said he was “disturbed and indeed deeply disappointed” by the EU plan.

“This is one of the of the most counterproductive measures imaginable for regional and global peace and security,” Pompeo said.

Versions of the SPV floated by thinktanks suggest it could underpin a sophisticated barter system that can avoid US Treasury sanctions. For example, Iran could ship crude oil to a French firm, accumulating credit that could then be used to pay an Italian manufacturer for goods shipped the other way, without any funds traversing through Iranian hands or the banking system.

A multinational European state-backed financial intermediary would be set up to handle deals with companies interested in Iran transactions and with Iranian counter-parties. Any transactions would not be transparent to the US, and involve euros and sterling rather than dollars.

The proposal is additional to a blocking statute passed by the EU in August that theoretically makes EU companies immune from sanctions imposed by the US in pursuit of its Iran policy. In theory, the statute empowers EU firms to seek compensation from US Treasury for trying to impose extra-territorial sanctions in breach of the statute. So far this statute has not been tested in court.

Richard Nephew, a former Barack Obama official and author of The Art of Sanctions, expressed scepticism on Twitter, saying that for the SPV to be taken up, European firms – many with either US employees, or US subsidiaries – must still be prepared to take the risk of being sanctioned by the US.

He also suggested US sanctions could be applied to the traded good as much as to the cash to fund the trade. He predicted few firms would take that risk, outside some SMEs [small and medium-sized enterprises] heavily dependent on Iran for their income.

Jarrett Blanc, another former Obama staffer for the Iran deal, broadly agreed with Nephew, but was more sympathetic, writing that “the symbolism here is probably Europe’s most important contribution, and it may be sufficient depending on what China, India, Turkey do on oil”. He added: “The payment mechanism move opens the door to a longer-term degradation of US sanctions power.”

Either way, Europe needs a solution soon after months of railing against US economic imperialism. The vast majority of European firms are planning to pull out.

Trump announced two sets of US secondary sanctions in May, and other sanctions imposed in August cover shipping and insurance. The other more important sanctions – aimed at ending Iranian oil exports, still the heart of the faltering Iranian economy – do not bite until 5 November.

In advance of the oil sanctions, Iran’s crude sales to China fell 21% between May and August, according to Eurasia Group. But it is unclear how long China will stick to that trend.

The assumption is that many countries like India and Russia will continue to trade with Iran and challenge the US to try to impose sanctions, pointing out that in reality it is the US, by tearing up the agreement and not them, that is in breach of UN resolutions.

Patrick Wintour is diplomatic editor for the Guardian.

Help deliver the independent journalism the world needs. Get The Guardian.