“So many of us thought we were alone,” said a graduate of an all-girls Catholic school who said she was raped at a party. “But we weren’t.” 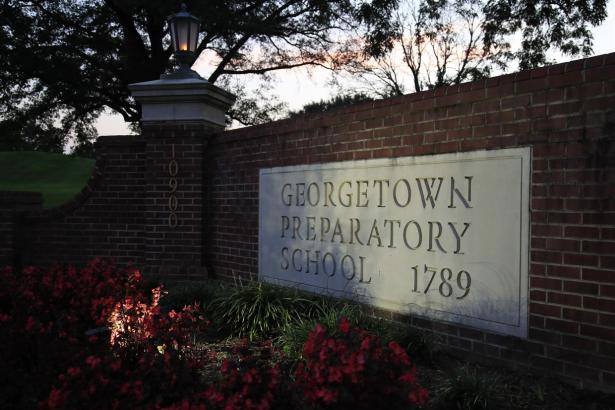 Christine “Cricket” Keating had a close-knit circle of friends growing up in Montgomery County, Maryland, in the 1980s — but there were some things they never discussed.

Keating and her friends — classmates at Georgetown Visitation Preparatory School and other all-girls Roman Catholic schools in the area — were part of the same privileged set as Supreme Court nominee Brett Kavanaugh and Christine Blasey Ford, though Keating was not friends with them. At that time, alcohol-fueled parties and drunken carousing were the norm, Keating and her schoolmates said.

But it was not until this month — after Ford alleged publicly that Kavanaugh assaulted her at one of those high school parties more than three decades ago, an allegation he vehemently denies — that women who attended the parties as teenagers began sharing their own stories of sexual assault and the shame and fear that kept them quiet afterward. Many are now taking a fresh look at their high school experiences and are grappling with a new understanding of misbehavior that took place decades ago.

“We had a strong friendship network and yet there was a curtain of silence,” said Keating, who graduated from Georgetown Visitation in 1985 and has been horrified recently to read her classmates’ accounts on private social media groups of what they experienced.

Ford, she said, “is breaking that culture of silence.”

A dozen women who attended Catholic and private prep schools in the Montgomery County area in the 1980s spoke to NBC News this week, seven of them on the record. The women — most of whom signed an open letter saying they believed Ford’s allegation, and all but two of whom did not know her or Kavanaugh personally — shared their memories of kegs, bonfires and unsupervised beach houses where heavy drinking fueled sexually inappropriate comments and behavior and attacks that were never spoken of afterward.

The women said they were warned by other girls about the aggression of boys from neighboring Catholic schools, particularly Georgetown Preparatory School, which Kavanaugh attended. Raised from an early age in their moneyed, Catholic community to remain chaste, the women said they believed anything that compromised that chastity was their fault — even if they were forced.

These stories from alumni of Holton-Arms School, where Ford graduated from, as well as Georgetown Visitation, Stone Ridge School of the Sacred Heart and others, are now emerging in news articles and op-ed articles and on closed Facebook groups like “We believe her too,” which was started by a Stone Ridge alum and has 117 members.

After reading other women’s stories in one of the Facebook groups, one graduate of the all-girls Stone Ridge shared for the first time with some members of the group that she was raped in 1982 at a high school party, two weeks before she was scheduled to leave for college.

“It’s been cathartic,” said the woman, who asked not to be identified out of fear of bringing shame to her family, who still live in the Washington area, and damaging her professional reputation.

“So many of us thought we were alone,” she said. “But we weren’t. When we heard Christine’s story, we knew that story. We’d experienced it.”

By 1990, off-campus parties had become such a problem that headmasters from seven of the Washington area’s elite private schools, including Georgetown Prep and Holton-Arms, joined to warn parents about the gatherings. According to a joint letter sent out by the schools, hundreds of unsupervised teenagers were regularly attending the parties.

“It would be hard to devise a better recipe for disaster than a social scene that includes the anonymity provided by an 'open party,' no adult supervision, considerable amounts of alcohol, and teenage hormones which encourage sexual or violent behavior," the letter said, according to The Washington Post.

Julie Swetnick alleged this week that Kavanaugh had spiked punch at house parties in the early 1980s to cause women to become intoxicated so they could be passed from boy to boy and assaulted, an allegation Kavanaugh denied and called “ridiculous and from the twilight zone.” Swetnick’s description did not surprise several women who spoke to NBC News and had attended Montgomery County high school parties in the 1980s.

One woman, who graduated from an all-girls school just south of Georgetown Prep the same year as Kavanaugh graduated, said she was 15 the night she was at one of those parties and lost track of her friends. She was alone with four boys and she was raped, she said, but she didn’t call it that until many years later.

“I don’t think I walked away knowing I’d been raped,” said the woman, who asked not to be identified out of fear that sharing her story could affect her professionally. After the assault, the woman said she sneaked back into her home through the window she had left from hours earlier.

“I walked away being ashamed,” she said. “Why would you tell? Who would have listened?”

None of the women who spoke of their assaults to NBC News said they had reported them to authorities.

Allyson Redpath, who graduated from Stone Ridge in 1982, said she heard from other girls from an early age that she should be wary of the boys from Georgetown Prep, which she and several other women who spoke to NBC News said had the worst reputation for misbehavior of the boys’ Catholic schools in the area. Georgetown Prep was considered a brother school to Stone Ridge.

“The assumption was, if something happened to you, that it was your own fault because you should have known it was going to happen to you,” Redpath said. “And nobody was going to do anything to protect you. The only thing that would happen is you would be shamed. So there was really no point in saying anything or in telling anybody.”

Redpath added that back then, “Georgetown Prep boys were kings.”

“There was a sense of entitlement,” Redpath said. “It was ‘boys will be boys.’”

"So many of us thought we were alone. But we weren’t."

Asked for comment, Georgetown Prep officials referred to a statement the school released this week saying that sexual assault and alcohol and drug abuse are problems at many high schools, both public and private, and that Jesuit schools, including Georgetown Prep, have worked together for decades to address the issues.“It is demonstrably false that such behavior or culture is tolerated, still less encouraged, at Georgetown Prep,” the school statement said. “In fact, our curriculum is designed to guide students away from these malignant influences, and to guide them through reflection away from selfishness and towards a life of service for and with others.”

“Certain individuals have recently presented themselves as representing the culture of Georgetown Prep authoritatively. They do not,” the statement continued. “The views they present may well represent their experience, but they do not represent our institutional or pedagogical goals, nor our efforts to implement those goals on behalf and out of a deep and abiding care for our students and their families, and for the larger culture in which they will work and live and raise their families.”

When Ford broke her silence on Kavanaugh — accusing him of sexually assaulting her at a party and covering her mouth when she screamed for help — she spurred other graduates of Montgomery County Catholic high schools to begin sharing their #MeToo stories.

One of those women is Grace, who attended Stone Ridge in the 1980s and said she was assaulted on a beach during Beach Week, an annual tradition in which students at Montgomery County Catholic high schools rented beach houses in Rehoboth Beach, Delaware, and Ocean City, Maryland, and threw blow-out parties during the first week of summer.

Grace, who asked not to be identified because she never told her family about what happened, said a boy got "overly physically aggressive" with her at the beach. “And then the boy that pretended to comfort me tried to assault me," she said.

“Why would you tell? Who would have listened?”

She told no one, she said.

“My reputation would have been ruined,” she said. “It would have been, ‘What would you do to provoke that?’ or, ‘Were you coming on to him?’ We never would have spoken about any of that.”

Grace said that, like many of her classmates, she had come to accept the behavior of boys at some of the parties as “normal,” but that reading other women’s stories on social media over the past week helped her realize that the behavior she had accepted as a teenager was unacceptable.

Melissa Meers, who graduated from Stone Ridge in 1982, said date rape was never spoken about when she was a teenager. And neither was the heavy drinking. “It’s all about appearances in the Georgetown area,” she said. “It does not matter if you are a complete drunk — all that matters is if you look good and are making the family look good.”

Meers said she started drinking heavily with her Catholic school friends at age 13. By 18, she was attending her first Alcoholics Anonymous meetings.

“I live in Las Vegas now and I’ve never seen people drink as much as people drank at those high school parties,” Meers, a mother of two teenagers, said. “That should tell you something about those parties.”

‘WE TOOK PRIDE IN HEAVY DRINKING’

Two men who attended Georgetown Prep in the 1980s also described parties with heavy drinking and no parental supervision.

“The entire school was beer-driven,” said William Barbot, who was a freshman at Georgetown Prep when Kavanaugh was a senior. “We took pride in heavy drinking. The central vibe was, ‘Where am I going to get drunk?’”

“There was a sense of entitlement. It was ‘boys will be boys.’”

Barbot and William Fishburne, 53, who graduated from Georgetown Prep with Kavanaugh in 1983, both said they’ve faced pressure within alumni circles to stay quiet regarding their memories of the school’s culture, after they both said publicly that they believe Ford. Fishburne said he’s received calls from pro-Kavanaugh Georgetown Prep alumni he hasn’t spoken to in decades.

“A lot of people are saying that I am being brave for sticking my neck out,” said Barbot, whose high school girlfriend was Ford’s classmate. “What’s being brave is Dr. Ford stepping forward.”

The women who spoke to NBC News said they, too, were heartened by Ford’s decision to step forward, but, even as Ford testified before a Senate committee on Thursday, they worried that it won’t make any difference.

“I fear what will happen now is what happened back then,” Redpath said. “And that’s that nobody will do anything, which is why nobody said anything in the first place. Your life becomes hell — and they get away with it.”