books The G.O.P. is Destroying Wisconsin -- and We Should All Be Worried

Wisconsin is one of several states with proud progressive, working class histories that are now the focus of the Republican Party's experiments in deeply conservative government. This book recounts the legacy of that experiment. 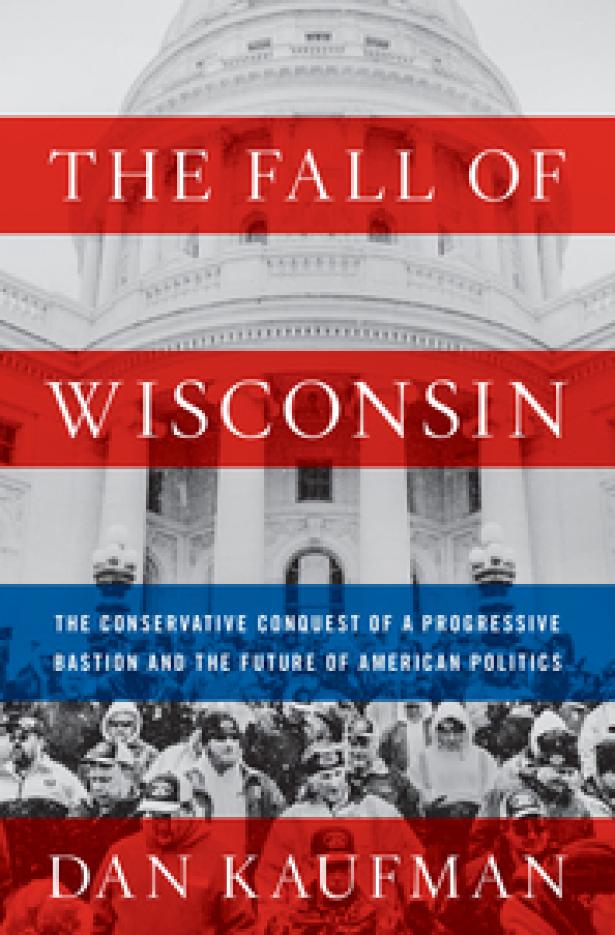 The Fall of Wisconsin: The Conservative Conquest of a Progressive Bastion and the Future of American Politics

Zealots relish destruction. It satisfies some primal urge to annihilate. And like a smug anarchist, Governor Scott Walker of Wisconsin has smashed a progressive state political tradition, generations in the making, with evangelical self-assurance.

Political writer and Wisconsin native Dan Kaufman documents Walker’s rise to ignominy in his new book The Fall of Wisconsin: The Conservative Conquest of a Progressive Bastion and the Future of American Politics. Lest the grandiose subtitle deter you, Kaufman delivers a highly readable, thoroughly engrossing report on how conservative activists and corporate lobbyists are using the Badger State as an incubator for a radical demolition agenda to be used across the nation.

Wisconsin’s contributions to American Progressivism may today be little known outside political science departments, but they were once legendary. Its experimental forays into social legislation since the 1800’s contributed significantly to The New Deal and The Great Society. That state Republicans are destroying those traditions holds ominous implications for the rest of the country.

The book opens on a bright, sunny Election Day, 2016 that turns to angst-ridden night when Wisconsin’s 10 electoral votes put Trump over the top. What seemed unthinkable that evening becomes more understandable as Kaufman dissects the Democratic Party’s decades-long abandonment of union labor and the Hillary Clinton campaign’s incompetent approach to handling Wisconsin, a state Clinton took for granted with fatal consequences.

Kaufman then transports us back to the early pioneer days, before statehood, as thousands of Scandinavian and German farming families brought a hunger for opportunity and a dedication to egalitarian principles to the Upper Midwest. Their fierce dedication to liberty eventually brought a succession of new states into the Union, fueled abolitionism, launched the Republican Party in 1854, and led directly to laws protecting farmers and workers from predatory railroad and factory owners.

Not long after, Robert “Fighting Bob” La Follette organized a ream of the state’s progressive principles into a political platform that heavily influenced social legislation nationally for the next century. What came to be known as the “Wisconsin Model” matched university professors and scientific researchers with politicians to craft legislation benefiting the state as a whole.

Kaufman recounts Progressivism’s faith in government, specifically its ability to promote the collective good while protecting the citizenry from corporate exploitation. A fusion of native and immigrant respect for air, land, water, and humanity created a political gospel that sustained Wisconsinites for over a hundred years. And that approach infused American social legislation throughout much of the 20th century.

A century and a half later Scott Walker attacked Progressivism as an egg-headed, German virus; as sordid intellectuality that had perverted Wisconsin into an anti-American cell of Socialist welfare addicts. His inverted Market Model now pairs lawmakers with lobbyists and paid consultants, supplanting the common good with what is most profitable for wealthy campaign donors.

The Republican playbook for some time has entailed breaking functioning systems in order to complain that those same systems don’t work. Their approach hands management of the hen house over to the foxes while telling the chickens that capitalism works in their favor. Kaufman’s historical analysis of Wisconsin’s egalitarian legacy reveals the ruse of modern “conservatism,” which alleges a concern for individual liberty by “freeing” citizens from “onerous” laws regulating parasitic capitalists.

Scott Walker deviously divided and conquered organized labor in Wisconsin by favoring hand-picked locals (such as state troopers, who protect the Governor) while attacking others (like civil service workers, who undermine conservative reform efforts). That flag-waving politicians like Walker target union membership betrays their indifference to how organized labor has historically contributed to workers’ prosperity and mitigated Capitalism’s detrimental social costs.

Kaufman also documents the utter disaster of Republican policies at the state level. One need look no further than the geographic and political juxtaposition of Wisconsin and Minnesota, two states with similar immigrant and progressive political histories, and each with a Republican and Democratic Governor, respectively, for the past eight-year span.

Where Scott Walker cut taxes on corporations, Mark Dayton of Minnesota raised them. Where Walker gutted civil service pensions, Dayton secured them. Where Walker decimated public education, Dayton invested many millions into it. The respective economic health of the two states after those same eight years correlates exactly to the astuteness of each executive’s vision for the role of government in ensuring his state's posterity.

And where once both the Badger and Gopher States consistently ranked in the upper decile of public education, employment, and resident retention, by Kaufman’s documentation, Wisconsin has plummeted, ranking nearer Alabama than Minnesota.

Labor and tribal leaders bring a fatalism to the book’s conclusion, a sense that working people will have to lose everything before recognizing the danger that Walker and his cronies pose to their health and welfare. Safeguards against the poisoning of our air and water, against union busting, against the financial catastrophes of unemployment and illness, against a lifetime of corporate servitude all stand in peril.

The perennial forces of avarice and subjugation are now strategically amputating the American Dream, which now seems little more than a tragic anachronism, far beyond Wisconsin's borders. As Dan Kaufman Tweeted after the Supreme Court’s Janus decision that purposefully sought to undermine union membership, “We are all Wisconsin now.”

Jim Swearingen is a Minneapolis-based writer.