Why is the US Christian nationalist right looking to Russia? The thought shatters old notions as odd indeed. It's supposed to be the left that's cozy with Russia. Since 1990 it's a new world. Newsweek gives a peek into it...

October 4, 2018 Tom Porter Newsweek
Printer friendly
The Christian Right is Looking to Putin's Russia to Save Christianity From the Godless West Published October 4, 2018 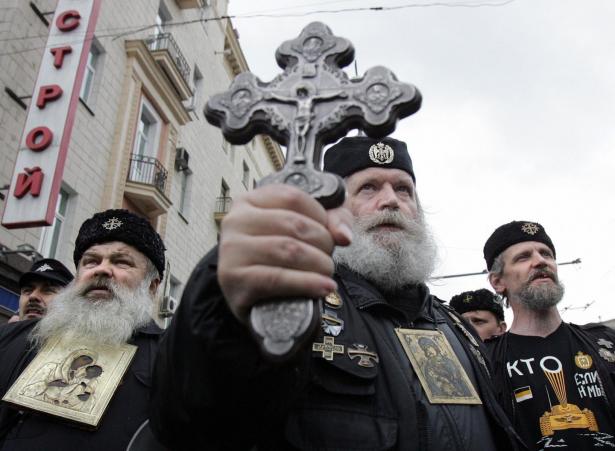 At a gathering of some of the world’s most virulent opponents of LGBT equality, Russian conservative activist Dmitry Komov warned of the destructive agenda underlying the spread of liberal values.

The West, he told a far-right French TV station in December, was committed to the “destruction of all of our collective identities: national identity, religious identity, gender identity,” and warned it would result in  “the destruction of human identity.”

Komov was in Chisinau, Moldova, for the Eurasian colloquium, where Russian Orthodox ideologues and European far-right activists rubbed shoulders. Between 13 and 16 September they are also joined by members of a U.S. conservative Christian groups in the city for the World Congress of Families. The unlikely allies feel that after decades of struggle, the time has come to topple Western liberal hegemony.

Relations between Moscow and Washington have been strained over allegations that Russia influenced the 2016 election of President Donald Trump, but religious conservatives in both nations have recently found common cause.

Under President Vladimir Putin, Russia and parts of the U.S. Christian right have formed an alliance that would have been unthinkable just a few decades ago, when American evangelical leaders railed against "godless communism."

Russia has reinvented itself as a bastion of Christian values in a world beset by relativism and godlessness. As a result, conservative Christians gathering at the World Congress of Families are looking to Putin to protect Christianity from the West.

A flashpoint for some conservatives has been Europe’s battle over LGBT rights. EU states are obliged to recognise same-sex relationships under membership rules - yet campaigns in individual nations to extend those rights and recognize gay marriage have met bitter opposition.

Some opponents look to Russia for guidance, and see its controversial laws restricitng LGBT rights as an example.

“In western Europe, many people believe that the West is collapsing and all civilisation is threatened by Islam, by demography, and by democracy,” Jean-Yves Camus, an associate research fellow at the French Institute for International and Strategic Affairs, told Newsweek.

“What they try to pretend is that there is only one country where Western civilisation is well and alive and thriving, and that’s Russia.”

For their part, Russian conservatives have long been hostile to the EU, which they accuse of seeking to undermine Russia with sanctions imposed following the annexation of Crimea. They see disputes over LGBT rights as flashpoints which can be exploited. Author Katherine Stewart recently wrote in the New York Times that "anti-LGBT politics are an effective tool in mobilizing religious nationalists everywhere, which is in turn an excellent way to destabilize the Western alliance and advance Russia’s geopolitical interests."

Yet the battle is about more than politics.

“What is going on between the West and Russia is more than just a hybrid warfare aiming to achieve results through interfering in elections and so on, but also a fight for the hearts and souls,” said Kreko.

The World Congress of Families

September's Moldova conference is reportedly being funded by pro-Kremlin Russian oligarch Konstantin Malofeev. The umbrella organization behind the event is the International Organization of the Family (IOF), based in Rockford, Illinois. It emerged from the U.S. Christian Right’s mission to place Christian values at the heart of public policy.

Camus described Malofeev as an “arch-conservative, who really believes in those values of Christianity, of family, fatherland,”  and who, before being placed under sanctions by the U.S. and EU, forged links with European far-right leaders. He has not responded to multiple requests for comment.

The IOF says its mission is to “affirm, celebrate, and defend the natural family as the only fundamental and sustainable unit of society.” The Southern Poverty Law Center describes it as “one of the key driving forces behind the U.S. Religious Right’s global export of homophobia and sexism.”

For several decades, the group has worked with Orthodox conservatives in Russia who share its commitment to rolling back liberal legislation on issues like LGBT rights and abortion. Moscow was scheduled to host a WCF conference in 2014, which activists allege was hastily rebranded to evade international sanctions. The IOF is credited as a key influence on the Kremlin’s notorious 2013 “gay propaganda” bill, whose stated aim was to outlaw the discussion of homosexuality with children and which has been blamed by activists for a surge of homophobic assaults in the country.

Relations between the IOF and its Russian allies remain close, and in May St Petersburg hosted an IOF home education congress. The head of the Russian Orthodox Church, Patriach Kiril of Moscow, who has forged close relations with the Kremlin, is slated to attend September's WCF conference.

Once dismissed as fringe extremists by the political elite, the WCF now counts friends amongst the leaders and politicians swept to power by the populist wave in Europe and the U.S.

Last year’s summit was held in Hungary, where populist Prime Minister Orban—a favourite of the U.S. hard right—addressed attendees, taking aim at his favorite foil, the European Union, which he described as being dominated by a “relativizing liberal ideology that’s an insult to families.”

Vice President Mike Pence and Housing and Urban Development Secretary Ben Carson were originally scheduled to address the conference, but their names were removed from a list of speakers without explanation.

In a statement to Newsweek, HUD spokesman Raffi Williams said that Carson “never agreed to speak at that event” and “never received an invite to that event.” The White House has not responded to a request for comment.

Among the members of the WCF is the Family Research Council, an anti-LGBT group with longstanding ties to Pence. In October, Trump became the first sitting U.S. president to address the FRC’s annual conference, the Value Voters Summit.

Cole Parke, a researcher at the progressive Political Research Associates think tank said that the WCF had opened the door for other evangelical and anti-LGBT activists seeking to spread their message in Europe.

“WCF is especially gaining influence in eastern Europe and in that role they’re ushering in other U.S. influences,” she said.

She said that the arrival of a “more aggressive’ form of Christian right from the U.S. had played a key role in “stoking the flames,” influencing the portrayal of gay rights as an attack on family and culture.

In October Kim Davis, the Kentucky clerk briefly jailed for refusing to issue a marriage license to a gay couple, visited Romania on a nine day tour to campaign for a bill outlawing same sex marriage, while Scott Lively, an evangelical Christian Minister based in Massachusetts, has extensively toured former Soviet states in eastern Europe expounding his virulently anti-LGBT views.

U.S. evangelicals are seeking to spread their message in western Europe as well. Later this month, preacher Franklin Graham, son of the late Billy Graham, is scheduled to speak in the U.K., with thousands of petitioners and three members of parliament calling for him to be banned from the country for spreading anti-LGBT and anti-Islam hate speech.

And the IOF isn’t the only U.S. conservative group with Russian links spreading conservative Christian values in eastern Europe. The National Prayer Breakfast has paid for four GOP lawmakers with a record of opposing laws expanding LGBT rights to speak in eastern Europe, TYTNetwork reported in July. That month, the Department of Justice accused alleged Russian agent Maria Butina of seeking to infiltrate high-powered circles in Washington through meetings of the group.

Meanwhile IOF President Brian Brown sits on the board of CitizenGo, a conservative pressure group headquartered in Spain which is behind a series of mass petitioning campaigns and which recently launched a fleet of buses emblazoned with anti-trans slogans. The buses were in August 2017 banned from the street's of Spanish capital, Madrid, by the city's mayor.

An ideological and political battleground

The latest front for the joined forces of conservative Russia and the U.S. christian right is Moldova, strategically positioned between Europe and Asia — and host of last December’s Eurasia conference, dubbed the "anti-Davos", where delagates discussed overcoming western liberal hegemony.

The December 2017 event could have been a dress rehearsal for this week's WCF meeting, which will seek to build on the success of last year’s event.

“It is a geopolitical and ideological battleground,” said Kreko, and remarked that the event was a message from “pro-Russian forces in Moldova that the U.S. conservative right and Russia together can save the world from this plague of liberalism and tolerance.”