Presidential Election Is about a Fight for Democracy in Brazil

For the first time in decades, the threat of a military dictatorship is surfacing in Brazil. No responsible journalism should ignore this threat, nor legitimize the extremism that strengthens it. 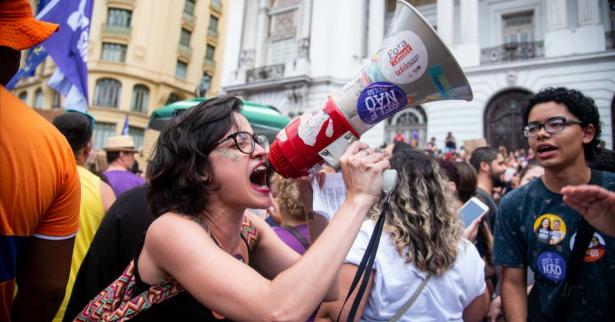 The original Portuguese version of this was published by the Brazilian newspaper Folha de S.Paulo on Friday. What follows is the English translation.

The world is watching Brazil’s elections, probably as never before. “Latin America’s latest menace: Bolsonaro Presidente,” screams the headline on the cover of The Economist. This conservative UK magazine would love to see the Workers’ Party (PT) disappear from Brazilian politics, but even they cannot stomach Bolsonaro, who in 2016 dedicated his vote to impeach President Dilma Rousseff to the colonel responsible for her torture.

Many have made the comparison to Trump, and of course there are similarities ― especially in the overt racism and misogyny of the two politicians. And both owe a large part of their rise to the failure of neoliberal economic policies. But Brazil’s trajectory to an even more dangerous threat scenario is a right-wing reaction by the country’s traditional, corrupt elite against the PT’s positive economic reforms that benefited the vast majority of Brazilians.

By 2014, under the presidencies of Lula and Dilma, poverty had been reduced by 55 percent and extreme poverty by 65 percent, and unemployment hit a record low of 4.9 percent. Some of these gains were lost when the economy then went into a deep recession that year, and the right took advantage of that downturn to seize what it could not win at the ballot box in four consecutive elections.

They impeached Dilma and removed her from office without even accusing her of an actual crime; and then Judge Moro sent Lula to prison for a “bribe” he never accepted, in a “trial” without material evidence. The US government sent expertsfrom its Justice Department to “help” with investigations, and quietly showed support for the removalof Dilma.

But the bulk of the Brazilian electorate could see that although all the major political parties were infected with corruption, the decapitation of the Workers’ Party was not about justice. Lula retained a commanding lead in the polls even after his conviction. And so it became necessary to bar Lula from running for president, to jail him, and restrict his access to the media.

It didn’t work; Fernando Haddad, former mayor of São Paulo and Lula’s original pick for vice presidential candidate, has risen rapidly in the polls and will likely faceBolsonaro in the second round of the election.

Some major media voices who are too ashamed to openly support Bolsonaro have tried to paint this election as a contest between “extremists” of the right and left. But this is a dangerous false equivalency. Haddad is a moderate social democrat, a label which also fairly describes the policies of Lula and Dilma before him. They allowed the economy to grow much faster than it did during the Cardoso years, expanded conditional cash transfer programs for the poor, raised the minimum wage, and increased public investment.

On the other side, the current government’s constitutional amendment to freeze real government spending for decades is an extremist measure to even the vast majority of economists. This zealotry has brought forth more virulent fanaticism along with the politics of fear and hate. Bolsonaro and other former military ― including his vice presidential candidate ― have raised doubts about whether they will accept unwanted election results.

For the first time in decades, the threat of a military dictatorship is surfacing. No responsible journalism should ignore this threat, nor legitimize the extremism that strengthens it. And anyone who cares about democracy in Brazil would have to support Bolsnonaro’s opponent in the second round of the election.

Mark Weisbrot is Co-Director of the Center for Economic and Policy Research(CEPR), in Washington, DC. He is also president of Just Foreign Policy. He is co-author, with Dean Baker, of Social Security: The Phony Crisis. E-mail Mark: weisbrot@cepr.net

Because of people like you, another world is possible. There are many battles to be won, but we will battle them together—all of us. Common Dreams is not your normal news site. We don't survive on clicks. We don't want advertising dollars. We want the world to be a better place.But we can't do it alone. It doesn't work that way. We need you. If you can help today—because every gift of every size matters—please do. Without Your Support For Common Dreams We Simply Don't Exist.