Turning on Trump: Here's What a Female Republican Voter Who Is Crossing Party Lines in November Looks Like

And if Anna Smith is any indication, Donald Trump's divisiveness could hurt his entire party. 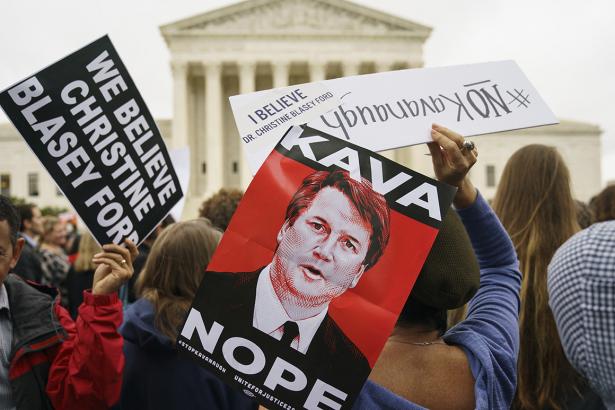 Female voters have slowly drifted away from the Republican Party for decades. Under Donald Trump, that trend has accelerated., Protesters outside the Supreme Court with "Kava Nope" signs are pictured. Carolyn Kaster/AP photo

President Richard Nixon once complained that in GOP politics, candidates had to jump through hoops by showing how conservative they were in the Republican primary only to turn around and rapidly run to the center in the general election. But with President Donald Trump, there has been no effort to appeal to the center; Trump ran an ugly, divisive, far-right campaign in 2016 and has been equally divisive and far-right as president. And if Anna Smith is any indication, that divisiveness could hurt Trump not only with liberal and progressive women, but with some suburban Republican women as well.

Recently interviewed by the Washington Examiner, Smith is a 40-year-old woman who lives in Lakeland, Tennessee—an affluent suburb of Memphis. Smith, a mother of two, has been campaigning for Phil Bredesen, the Democrat who is running against Republican Rep. Marsha Blackburn in the 2018 Tennessee Senate race. But Smith is not a Democrat. She is a conservative-leaning Republican, and her distaste for Trump’s presidency is inspiring her to campaign for Bredesen.

The Washington Examiner quotes Smith as saying of Trump, “His behavior—making fun of people, mocking people—is just so distasteful, and it doesn’t help anything. It’s not pushing things forward. He is not a traditional Republican. I’m still here, is what I feel like. I’m still here as a moderate Republican, and he does not represent me.”

Smith is supporting Bredesen not out of a love of all things Democrat, but as an effort to voice her displeasure with Trump. And if enough suburban Republican women join her, it could be bad news for the GOP in suburban swing districts on November 6.

The key word is “suburban.” As the Washington Examiner’s article points out, an anti-Trump Republican like Smith is not a threat to Republicans in hard-right rural districts but rather, in suburban swing districts like Lakeland—or, for that matter, the suburbs of Philadelphia.

Other suburban swing districts where pro-Trump Republican candidates could run into problems in 2018 range from the Boston suburbs to the Virginia and Maryland suburbs of Washington, DC. Being pro-Trump can be an advantage for Republican candidates in small towns and rural areas in Nebraska, Utah or Oklahoma, but it doesn’t play well in DC’s Virginia suburbs—where incumbent Sen. Tim Kaine is clearly the favorite in the Virginia Senate race. Of course, the fact that his pro-Trump GOP opponent, Corey A. Stewart, is a racist wingnut who praises Confederate soldiers hasn’t hurt Kaine’s bid for reelection.

In Democrat-leaning Massachusetts, Republican Gov. Charlie Baker seems poised for a landslide reelection. But so does Democratic Sen. Elizabeth Warren, a staunch liberal. And Baker, a pro-choice Rockefeller Republican, has been careful to avoid associating himself with Trumpism in suburban areas where the president is wildly unpopular.

If Beto O’Rourke, the Democrat running against Sen. Ted Cruz in the Texas Senate race, manages to pull off a narrow victory, women in the suburbs of Houston, Dallas, San Antonio and Austin will be a factor. The GOP has a very strong ground game in numerous rural counties in the central and northern parts of Texas, but the Lone Star State’s largest cities are more Democratic. And O’Rourke will need a heavy female turnout in the suburban areas of Houston and other large cities on November 6—including some Republican women willing to cross party lines.

The takeaway: Trump isn’t hurting Republican candidates among rural women, but among suburban and urban women, he has been terrible for the GOP brand. And if Democrats get enough suburban women to the polls this year—including some women who are registered Republicans—they could perform well on November 6.