In 2005 after John Roberts was confirmed, Howard Zinn wrote: It would be naive to depend on the Supreme Court to defend the rights of poor people, women, people of color, dissenters of all kinds. 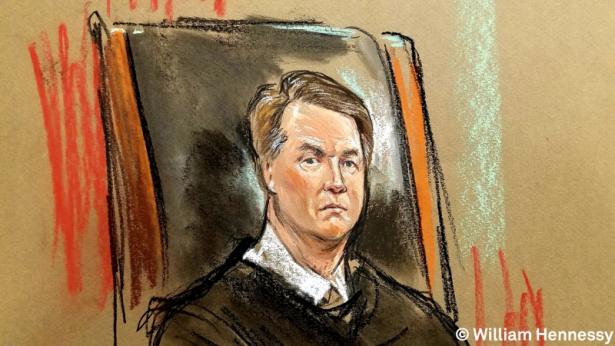 John Roberts sailed through his confirmation hearings as the new Chief Justice of the Supreme Court, with enthusiastic Republican support, and a few weak mutterings of opposition by the Democrats. Then, after the far right deemed Harriet Miers insufficiently doctrinaire, Bush nominated arch conservative Samuel Alito to replace Sandra Day O'Connor. This has caused a certain consternation among people we affectionately term "the left."

I can understand that sinking feeling. Even listening to pieces of Roberts's confirmation hearings was enough to induce despair: the joking with the candidate, the obvious signs that, whether Democrats or Republicans, these are all members of the same exclusive club. Roberts's proper "credentials," his "nice guy" demeanor, his insistence to the Judiciary Committee that he is not an "ideologue" (can you imagine anyone, even Robert Bork or Dick Cheney, admitting that he is an "ideologue"?) were clearly more important than his views on equality, justice, the rights of defendants, the war powers of the President.

At one point in the hearings, The New York Times reported, Roberts "summed up his philosophy." He had been asked, "Are you going to be on the side of the little guy?" (Would any candidate admit that he was on the side of "the big guy"? Presumably serious "hearings" bring out idiot questions.)

If the Constitution is the holy test, then a justice should abide by its provision in Article VI that not only the Constitution itself but "all Treaties made, or which shall be made, under the Authority of the United States, shall be the Supreme Law of the Land." This includes the Geneva Convention of 1949, which the United States signed, and which insists that prisoners of war must be granted the rights of due process.

A district court judge in 2004 ruled that the detainees held in Guantanamo for years without trial were protected by the Geneva Convention and deserved due process. Roberts and two colleagues on the Court of Appeals overruled this.

There is enormous hypocrisy surrounding the pious veneration of the Constitution and "the rule of law." The Constitution, like the Bible, is infinitely flexible and is used to serve the political needs of the moment. When the country was in economic crisis and turmoil in the Thirties and capitalism needed to be saved from the anger of the poor and hungry and unemployed, the Supreme Court was willing to stretch to infinity the constitutional right of Congress to regulate interstate commerce. It decided that the national government, desperate to regulate farm production, could tell a family farmer what to grow on his tiny piece of land.

When the Constitution gets in the way of a war, it is ignored. When the Supreme Court was faced, during Vietnam, with a suit by soldiers refusing to go, claiming that there had been no declaration of war by Congress, as the Constitution required, the soldiers could not get four Supreme Court justices to agree to even hear the case. When, during World War I, Congress ignored the First Amendment's right to free speech by passing legislation to prohibit criticism of the war, the imprisonment of dissenters under this law was upheld unanimously by the Supreme Court, which included two presumably liberal and learned justices: Oliver Wendell Holmes and Louis Brandeis.

It would be naive to depend on the Supreme Court to defend the rights of poor people, women, people of color, dissenters of all kinds. Those rights only come alive when citizens organize, protest, demonstrate, strike, boycott, rebel, and violate the law in order to uphold justice.

It would be naive to depend on the Supreme Court to defend the rights of poor people, women, people of color, dissenters of all kinds. Those rights only come alive when citizens organize, protest, demonstrate, strike, boycott, rebel, and violate the law in order to uphold justice.

The distinction between law and justice is ignored by all those Senators--Democrats and Republicans--who solemnly invoke as their highest concern "the rule of law." The law can be just; it can be unjust. It does not deserve to inherit the ultimate authority of the divine right of the king.

The Constitution gave no rights to working people: no right to work less than twelve hours a day, no right to a living wage, no right to safe working conditions. Workers had to organize, go on strike, defy the law, the courts, the police, create a great movement which won the eight-hour day, and caused such commotion that Congress was forced to pass a minimum wage law, and Social Security, and unemployment insurance.

The Brown decision on school desegregation did not come from a sudden realization of the Supreme Court that this is what the Fourteenth Amendment called for. After all, it was the same Fourteenth Amendment that had been cited in the Plessy case upholding racial segregation. It was the initiative of brave families in the South--along with the fear by the government, obsessed with the Cold War, that it was losing the hearts and minds of colored people all over the world--that brought a sudden enlightenment to the Court.

The Supreme Court in 1883 had interpreted the Fourteenth Amendment so that nongovernmental institutions hotels, restaurants, etc.-could bar black people. But after the sit-ins and arrests of thousands of black people in the South in the early Sixties, the right to public accommodations was quietly given constitutional sanction in 1964 by the Court. It now interpreted the interstate commerce clause, whose wording had not changed since 1787, to mean that places of public accommodation could be regulated by Congressional action and be prohibited from discriminating.

The right of a woman to an abortion did not depend on the Supreme Court decision in Roe v. Wade. It was won before that decision, all over the country, by grassroots agitation that forced states to recognize the right. If the American people, who by a great majority favor that right, insist on it, act on it, no Supreme Court decision can take it away.

The rights of working people, of women, of black people have not depended on decisions of the courts. Like the other branches of the political system, the courts have recognized these rights only after citizens have engaged in direct action powerful enough to win these rights for themselves.

This is not to say that we should ignore the courts or the electoral campaigns. It can be useful to get one person rather than another on the Supreme Court, or in the Presidency, or in Congress. The courts, win or lose, can be used to dramatize issues.

On St. Patrick's Day, 2003, on the eve of the invasion of Iraq, four anti-war activists poured their own blood around the vestibule of a military recruiting center near Ithaca, New York, and were arrested. Charged in state court with criminal mischief and trespassing (charges well suited to the American invaders of a certain Mideastern country), the St. Patrick's Four spoke their hearts to the jury. Peter DeMott, a Vietnam veteran, described the brutality of war. Danny Burns explained why invading Iraq would violate the U.N. Charter, a treaty signed by the United States. Clare Grady spoke of her moral obligations as a Christian. Teresa Grady spoke to the jury as a mother, telling them that women and children were the chief victims of war, and that she cared about the children of Iraq. Nine of the twelve jurors voted to acquit them, and the judge declared a hung jury. (When the federal government retried them on felony conspiracy charges, a jury in September acquitted them of those and convicted them on lesser charges.)

Still, knowing the nature of the political and judicial system of this country, its inherent bias against the poor, against people of color, against dissidents, we cannot become dependent on the courts, or on our political leadership. Our culture--the media, the educational system--tries to crowd out of our political consciousness everything except who will be elected President and who will be on the Supreme Court, as if these are the most important decisions we make. They are not. They deflect us from the most important job citizens have, which is to bring democracy alive by organizing, protesting, engaging in acts of civil disobedience that shake up the system. That is why Cindy Sheehan's dramatic stand in Crawford, Texas, leading to 1,600 anti-war vigils around the country, involving 100,000 people, is more crucial to the future of American democracy than the mock hearings on Justice Roberts or the ones to come on Judge Alito.

That is why the St. Patrick's Four need to be supported and emulated. That is why the GIs refusing to return to Iraq, the families of soldiers calling for withdrawal from the war, are so important.

That is why the huge peace march in Washington on September 24 bodes well.

Let us not be disconsolate over the increasing control of the court system by the right wing.

The courts have never been on the side of justice, only moving a few degrees one way or the other, unless pushed by the people. Those words engraved in the marble of the Supreme Court, "Equal Justice Before the Law," have always been a sham.

No Supreme Court, liberal or conservative, will stop the war in Iraq, or redistribute the wealth of this country, or establish free medical care for every human being. Such fundamental change will depend, the experience of the past suggests, on the actions of an aroused citizenry, demanding that the promise of the Declaration of Independence--an equal right to life, liberty, and the pursuit of happiness--be fulfilled.

[Howard Zinn was a historian, political scientist, social critic, activist and playwright, best known as author of the bestseller A People's History of the United States. The author of some 20 books, he was a Professor in the Political Science Department at Boston University. He died in 2010.]