White women are as likely to believe Kavanaugh as they are Christine Blasey Ford, polls have found, continuing a long pattern of voting Republican. 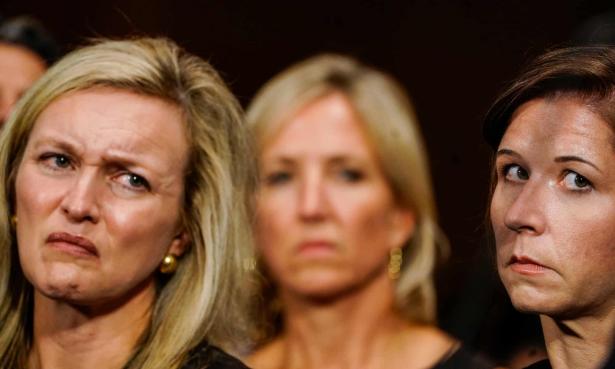 It would make sense that the people most likely to believe the testimony of Dr Christine Blasey Ford would be the ones who look like her: middle-aged, white women.

But polls and even a cursory glance at cable news show this not to be the case.

Fox News host Martha MacCallum said that following Ford’s testimony, she kept hearing from moms who “fear due process is dead”. If Brett Kavanaugh is denied a supreme court confirmation over Ford’s sexual assault allegations, these women fear their sons could be subjected to “an unfair precedent” one day.

It’s a view very much condoned in the White House. Donald Trump – in addition to vocally defending Kavanaugh – recently used the moment to push back on his own more than a dozen female accusers, and bemoaned“the trauma for a man” involved in having such claims aired.

Donald Trump Jr, when asked if he was more worried for his sons or daughters, said: “Right now, I’d say my sons.”

In other words, they’re thinking more of men than women, and no small number of white women seem happy to follow suit.

A new ad released Thursday by CatholicVote.org goes from footage of adorable babies growing into men, to Kavanaugh saying Ford’s claims have him “totally and permanently destroyed”. Viewers are told: “If it can happen to him, it can happen to our sons, our brothers, husbands, fathers. It can happen to you.”

That last line – “It can happen to you” – would seem to apply much more to Ford’s fate than Kavanaugh’s where moms are concerned, since one in three women will experience sexual violence in her lifetime and perpetrators are overwhelmingly male.

So many were shocked earlier this week when a poll found that while minority voters overwhelmingly believe Ford over Kavanaugh, a breakdown of the data by gender revealed white women were nearly as likely to believe Kavanaugh as Ford.

Specifically, the poll found 46% of white women believe Ford and 43% believe Kavanaugh – “Not a large difference at all when you take the margin of error into account,” Tim Malloy, who oversaw Quinnipiac’s national polling, told the Guardian.

“That is not an aberration, it’s the continuation of a long pattern of white women voting Republican,” said Julie Kohler, a senior vice-president for the Democracy Alliance, a network of major progressive political donors, who holds a PhD in family social science and writes about women’s voting patterns for the Nation. A full 69% of Republican women favor confirming Kavanaugh, according to a Morning Consult/Politico poll released earlier this week.

“White women are not by any means a monolithic voting bloc,” Kohler told the Guardian. Rather, they’re profoundly influenced by education, religion and especially marital status.

The women’s movement is, among other things, a study in all the ways women are divided from one another. Early suffragist movements were tainted by racism, and when women finally did get the right to vote, they couldn’t agree on candidates or causes to support.

The Equal Rights Amendment, when it was introduced in the 1920s, devolved into a war between working and middle class women and went nowhere. Reintroduced in the 1970s, it was defeated by a group of deeply-conservative housewives led by Phyllis Schlafly.

And while African Americans voters supported Barack Obama with near unanimity, the so-called “women’s vote” never materialized behind Hillary Clinton. Instead, Trump won white women with 53% of the vote.

Stephanie Gutmann, a conservative writer and veteran journalist, told the Guardian on Friday that she was annoyed by liberal insistence that Ford’s treatment would drive women to the polls.

“What is this women thing? Why do you think we’re so monolithic? We’re not so monolithic at all. In the media we’re portrayed as being very single-issue, just voting on reproductive rights. I think there may be a movement of women to the polls, but it’s going to be on both sides,” she said.

After watching coverage of the hearings, Gutmann felt compelled to pen an op-ed for USA Today on why conservative women like her won’t abandon Kavanaugh. Still, she said, she was moved by Ford’s testimony. “She seemed very fragile to me, I was struck by that,” she said. “I believe that something happened to her, but don’t believe necessarily that it involved Kavanaugh, and I don’t think the evidence is strong enough to go forward with any more investigation at this point.”

It isn’t just women she’s worried about, with regard to justice.

“We have husbands and sons and brothers and lovers and they’re part of our lives intertwined,” she said. “I think it’s fair to have the emphasis on sons now because the ball swings back and forth and right now the pendulum has swung way too far in the sort of believe-the-woman-at-any-cost direction.”

The emphasis fits nicely with a recent study of women’s voting patterns, which found that while single women tend to cast votes with the fate of all women in mind, women married to men, and white women in particular, often vote on behalf of their husbands and families, research shows.

Clinton was pilloried for saying on the campaign trail that she came across women “under tremendous pressure from fathers and husbands and boyfriends and male employers not to vote for ‘the girl’”.

But plenty of social science backs her up.

There’s a study from the Institute for Social and Economic Research which found that wives in general vote in ways that support their husband’s economic interests. As well as the research showing that white women are particularly likely to do so – after all, the white men they typically marry still earn more than any other demographic.

Clinton’s comment about white women voting their husband’s interest has (ungenerously) been interpreted as meaning white women can’t think for themselves, but Kohler pushed back on that notion, as Clinton herself did at the time. “I don’t think it’s a matter of women not thinking for themselves. It’s about the way that larger structural inequalities are driven through institutions like marriage,” Kohler said.

While we see much more egalitarian marriages than we did a century ago, she noted, women weren’t able to have their own money or property before; and the concept of marital rape didn’t even exist until the 1970s.

“It’s not to say that every married woman is subjugated in her marriage. Of course that’s not true,” Kohler added. “But it is true that as an institution it has privileged men’s interests historically, and I think we still live with some of that legacy.”

The recent polling around Kavanaugh would seem to lend further credence to insights about how white women vote when married.

White women, according Bureau of Labor Statistics data, are more likely to marry and stay married than women of other races – and marriage influences voting patterns significantly.

Kelsy Kretschmer, who teaches at Oregon State University and co-authored the recent study on single versus married women’s voting patterns, told the Guardian the Kavanaugh polling on white women and conservative talking points are very much in line with her own research. “It’s consistent with the ideas that we put forward in the paper, which is that married white women’s interests change, and they start to think about their husbands interests as their own,” she said.

But Kretschmer said their shifting priorities are more than an economic calculation – the shift is cultural, too. Research, including a study published in the Journal of Marriage and Family, has shown when women get married they have less contact with other women and more intense contact with their husbands and family, and that these ties influence political participation.

What’s more, white women and Latina women, the populations most likely to be conservatively influenced by marriage, according to Kretschmer’s study, are often in traditional marriages with male breadwinners. (By contrast, more than 80% of black moms are the breadwinners, according tofindings from the Institute for Women’s Policy Research and the National Domestic Workers Alliance.)

“I think it’s also consistent with when people are worried about their sons and their husbands being accused of sexual harassment or sexual abuse, that they don’t think of themselves just as a person likely to be victimized by that – they now think of protecting their husband from those kinds of things,” Kretschmer said. “Their interests have just shifted.”

The white men that white women overwhelmingly marry are a solidly conservative voting bloc. And the parties are fiercely polarized on the Kavanaugh issue: recent polling from the nonpartisan Public Religion Research Institute (PRRI) found that Republican white men are much more likely to support candidates who have been repeatedly accused of harassment than Democrats – and notably, that party trumped gender.

More than two-thirds (68%) of all women, compared to 53% of men, say they would definitely not vote for a candidate accused by multiple people of sexual harassment. But nearly half (48%) of Republican women said they would consider voting for such a candidate. That’s compared to just 14% of Democratic women who would.

And while there were regional differences of opinion across gender they weren’t nearly as determinative as questions of race or party.

“In general it’s one of the lessons learned from the 2016 election season that many, particularly Hillary Clinton supporters who were looking for this great women’s arising to buoy her to victory, really underestimated the power of race and partisanship,” PRRI CEO Robert Jones told the Guardian. “The interests that run along the lines of gender are first refracted by these other kinds of identity markers.”

That’s been the rule, historically speaking. And so while progressive white feminists continue to marvel at how many white women could possibly support support Kavanaugh, the experts Guardian spoke with said, if anything, progressives should be encouraged.

“The frustration of white women voting for Donald Trump by a majority and for Roy Moore in Alabama by a majority – that’s not new and that’s not a recent problem,” said Kretschmer. “I think the interesting thing is they’re actually voting a bit less that way in the current political context.”

Kohler put it in stronger terms. “As a progressive white feminist, I look at these numbers and I feel overall depressed about what’s going on with with women,” she said of an effectual wash between Ford and Kavanaugh, “but I do think we’re starting to see a shift that could be a more permanent alignment.”

And she may have some cause for hope.

Jones told the Guardian his polling indicated that the number of Americans who self-identify as Republicans has shrunk over the past few years, with more people who were previously identifying as Republican now identifying as independent. And Democratic pollster Anna Greenberg with Greenberg Quinlan Rosner recently told NPR that their surveys had shown married women, especially in the last six months, turning against Trump and beginning to lean more Democratic in the congressional races.

In November, Democrats are counting on what would be, historically speaking, unusually strong support from suburban white women – and college educated ones in particular – to help them retake the House of Representatives.

Kohler said she’s been buoyed more recently by a surge in white women voters and white college-educated women voters voting blue in recent races in Alabama and Virginia. And she looked to history to bolster her optimism, recalling when a harsh anti-immigration measure (Prop 187) in 1994 helped drive Latinos out of the California Republican party for a generation, and said something similar could be happening with white women now.

“I’m curious if we’re at this moment when Trump and Kavanaugh … drive them out of the Republican party for a generation to come, and I don’t think that’s implausible,” she said.

Of course women have never behaved as cohesively as racial voting blocs, and Kohler, fittingly, added a caveat.

[Lucia Graves is a columnist and feature writer for Guardian US. Twitter @Lucia_Graves]