After exploring the vast surveillance regime along the US-Mexico border and finding Israeli systems installed at every turn, the author Todd Miller and I were drawn to investigate Israel as the largest homeland security industry in the world. 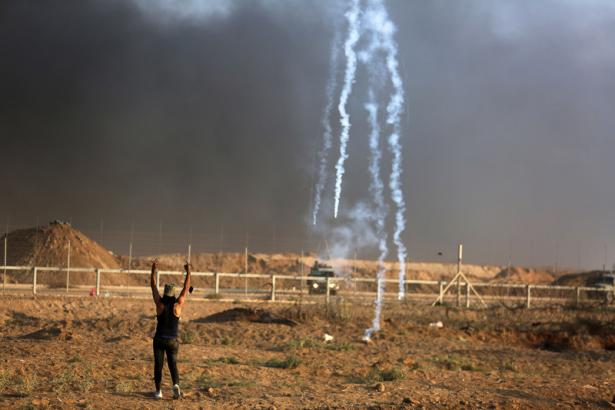 Israel’s arms industry is twice the size of its US counterpart in exports per capita and employs a percentage of the national workforce double that of the US or France, two of the top global arms exporters.

During our 2016 trip, it didn’t take us long to zero in on some of Israel’s most enterprising industrialists who told us how they do it while controlling an area roughly the size of New Jersey.

On our first day there, while attending an annual drone conference, we met Guy Keren, the middle-aged and charismatic CEO of an Israeli homeland security firm called iHLS. Keren’s iHLS had organized the drone conference.

Several days later, we sat down with Keren in iHLS’s then brand new headquarters in the Mediterranean coastal city of Raanana, known for its high-tech industrial park. We spoke to him in the fishbowl conference room above his company’s computer lab.

Below us, gaggles of junior technologists clacked eagerly at their keyboards. This Lighthouse complex, Keren said, could host up to 150 startups.

Keren explained how the Gaza Strip affords Israel – and iHLS – a competitive advantage over other countries because of the real-time opportunities to test new products year-round. Israel has earned the moniker of “start-up nation” among business elites around the world.

We asked Keren why it is that Israel’s technology industry performs at an astonishing level of productivity, especially in the military sector.

“Because we are checking our systems live,” he said. “We are in a war situation all the time. If it’s not happening right now, it will happen in a month.”

“It’s not [just] about building the technology” and having to wait years to try out the systems, Keren told us. The secret of the Israeli tech sector’s success, he explained, lay in “operating the technology faster than any other country in live situations.”

Keren isn’t the first to make this connection. Gaza is widely perceived as a human Petri dish – to improve killing capacity and cultivate pacification methods – among the movers and shakers in the Israeli high-tech and military sectors.

When Roei Elkabetz, a brigadier general in the Israeli army, addressed a 2012 convention of specialists in border control technology in El Paso, Texas, he clicked onscreen a photo of the wall, built by Magal Systems, that isolates Gaza from the outside world.

“We have learned lots from Gaza,” he said. “It’s a great laboratory.”

Leila Stockmarr, a Danish scholar, has attended the same kinds of Israeli security expos as Todd Miller and I. “As most of the company representatives I interviewed imparted, it is central to Israel’s cutting-edge military and policing capacities that new pieces of technology are developed and tested in a concrete situation of controlling a population, such as in the Gaza Strip,” she writes in her 2016 essay, “Beyond the Laboratory Thesis: Gaza as Transmission Belt for War and Security Technology.”

As one representative of a major security company told Stockmarr: “Once an order has been made by the Israeli military, and after initial deployment in the field, the company’s technical departments are often contacted with demands for corrections and tweaks based on experience. Thus every time the military uses Israeli HLS [homeland security] technology, it automatically tests it. Companies benefit greatly from this and every time a new order is placed, this feedback from the battlefield is injected to improve the process of tendering and guarantee quality and effectiveness.”

Unusually for a country’s arms industry, Israel has a laboratory in a territory it occupies – Gaza – very close to the production facilities for its weapons and surveillance technology. Engagement in the Gaza Strip, as Stockmarr noted in 2016, helps companies generate and refine new ideas and fine tune product lines.

In April 2018, Saar Koursh, then the CEO of Magal Systems – a contender for President Donald Trump’s proposed additions to surveillance infrastructure on the US-Mexico border – was even reported as having described Gaza as a “showroom” for the company’s “smart fences” whose customers “appreciate that the products are battle-tested.”

Stockmarr notes that Palestinians in Gaza themselves play a role in the testing phase, performing a “crucial part” of this homeland security industry cycle: “In order to evaluate a given product, the systematic inclusion of the targeted populations’ responses to new security technologies are crucial for foreign buyers.”

Plenty of global customers are sold on the idea, at least if the profit margin is anything to go by. “Magal’s US traded shares jumped in late 2016 as Trump talked about a Mexican border wall,” according to Bloomberg.

And during the first month of Israel’s 2014 attack on Gaza, the share price of Israel’s largest weapons firm, Elbit Systems, increased by 6.1 percent. More than 2,200 Palestinians were killed in that attack.

This year, since the Great March of Return protests began on 30 March, Israel’s latest line of crowd-control drones to make their Gaza debut include the appropriately named Sea of Tears drone – a commercially-produced Chinese camera drone modified by the Israeli police to discharge tear gas onto the human throngs below – and the Shocko Drone that unleashes “skunk water” on protesters.

The Gaza health ministry has observed over the past six months the human effects of Israel’s “butterfly bullets” – which explode on impact. These are among the deadliest bullets Israel has ever used.

Doctors Without Borders personnel treated butterfly bullet-like injuries in 50 percent of the more than 500 patients they treated during the protests.

Many of the protesters who weren’t killed outright were severely injured, earning butterfly bullets a new place in the Israeli military’s long history of shoot-to-maim practices, which Jasbir K. Puar details in her book, The Right to Maim: Debility, Capacity, Disability.

As of 1 October, more than 150 Palestinians have been killed in the Great March of Return, including more than 30 children. More than 10,000 have been injured, half of them by live fire.

Meanwhile, back at the Raanana industrial park, Keren and his staff in the air-conditioned offices of iHLS are busy developing the next players in Israel’s arms industry, updating their systems and expanding their profit margins.

Gabriel M. Schivone is a visiting scholar at the University of Arizona and author of the forthcoming book Making the New “Illegal”: How Decades of US Involvement in Central America Triggered the Modern Wave of Immigration (Prometheus Books).