“Pinjratod,” or ‘Break the cages,’ is a group founded in 2015 by women students of various universities demanding equal rules for men and women in Indian universities. 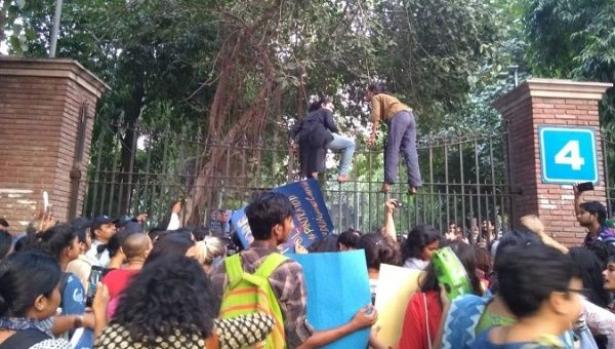 The women students of the University of Delhi organized a protest Monday against sexist university policies in India. Organized by an autonomous women students’ group named “Pinjratod,” which translates to ‘Break the Cages,’ the students marched around the campus demanding their autonomy and an end to the curfew system in Indian universities.

Pinjratod, started in 2015 by women students of various universities in the capital city of New Delhi, has been demanding equal rules for men and women in Indian universities, especially university hostels (as student dorms in India universities are referred to).

“Today's protest is a culmination of various protests happening all over the country in various universities. At present, colleges in Bhopal, Ajmer, Bhubaneswar, Patiala, Kerala, Allahabad, Rohtak, and Raipur are witnessing protests by women students against discriminatory rules," Avantika Tewari, a student, and feminist activist told teleSUR in comments about the movement and the Oct. 8 protest.

“Some of these colleges are not politicized and they are seeing a protest for the first time. They have no unions and these protests are spontaneous. Pinjratod has been in touch with them throughout. Women students in Punjab University, Patiala are on a hunger strike for the past 12 days demanding their rights. So many students have been hospitalized due to the hunger strike.”

Avantika and Devika Shekhawat, another Pinjratod activist gave a history of the movement while speaking to teleSUR.

In 2015, Jamia Millia Islamia University, a Central University in Delhi, decided to cancel late night permissions for women students. The hostels in Indian universities have a curfew time for women ranging from 7:30 pm to 10:00 pm and it varies for undergraduate women and post-graduate women, while men’s hostels do not have any curfew. In cases where men's hostels have a curfew, they are just on paper with no real implementation.

The women accommodation authorities allow women to have two to four “late nights” per month and a similar amount of “nights out” with written permission from their parents 24 hours before they want to go out. For night outs, the students have to bring back a signature of their “local guardian” on a hostel issued permission book which proves that they have stayed with the guardian and not with anyone else.

Jamia Millia University decided to cancel "late nights" for women students, which angered them. A student then penned an anonymous letter criticizing the move by the university restricting the mobility of female students and deems them infantile. The university legitimized their decision by saying that they are doing this to provide safety for the women students since Delhi is known as the rape capital of India.

“This reason is ridiculous because if a woman for any reason comes late and cannot make it to the hostels by the curfew time, they are asked to stay outside of the hostel without any regard to their safety,” argued Avantika. “Where is the concern for their safety then?”

After the anonymous letter, women students of various universities came together and started the movement demanding their respect and autonomy and an end to the infantilization of adult women.

Some of the demands that the protesting women students have been making for the last three years are:

1. A rollback of the curfew.

2. An end to the local guardian system.

3. A functional Internal Complaints Committee to help students with sexual harrassment cases —  they are currently ineffectual in Indian universities.

4. Demand for separate hostels for PwD (Persons with Disabilities) women students who have different needs.

All these demands arose from intensive campaigning, meeting and talking to women students in the universities.

For example, the curfew system not only immobilizes women and takes away their freedom but it also hampers their studies. “Delhi University central library is open 24*7 but due to curfew, only men can access the library after a certain time. This automatically obstructs the the women students from getting equal access to education,” said Devika.

They are demanding that the local guardian system be abolished and replaced with emergency numbers because this system gives undue authority to local guardians over the women students. Often many students, to secure university accommodation, find someone who is not well known to them and that actually pose more threats rather than ensuring their safety.

PwD women students face the extra burden of re-applying for hostels after every semester instead of every year like other women students and this poses undue problems for them. They also used to get a 50 percent subsidy for their food, funded by the University Grants Commission (UGC) but they have recently stopped that policy.

UGC is a statutory body which used to fund Indian universities, but the current right-wing government, in a bid to privatize higher education, took away funding and power from the UGC and started Higher Education Funding Agency (HEFA) in 2018 which is acting as a loan agency.

Universities now have to apply for loans for the functioning of the institutions. In turn, the universities are increasing their fees and cutting down jobs to repay the loans according to the activists.

“Divesting from higher education and spending more money on defense is the new strategy of the present Indian government. This is also resulting in the admission of a certain class of people in universities,” Devika said.

Commenting on how university authorities responded to their demands and protests, both activists said they are very negative in their approach.

“We organized our first night march saying that space is ours as well on Oct. 8, 2015, and funnily the protest we organized on Oct. 8, 2018, still has the same demands. We presented our charter of demands to the vice chancellor and proctor of the university but they refused to negotiate with us,” Devika responded.

“We have given them (the authorities) three years to deliberate. Instead of deliberating with us, they are retaliating by shrinking public spaces within the universities. For example, the authorities of Jawaharlal Nehru University have closed all the dhabas (small roadside tea stalls) inside the campus which used to be open the whole night.

Many university spaces are taking out street lights. So even if we get our demands, the question arises 'what will you do with your freedom?' But we are hopeful. With so many movements going on in different cities, new assertions are coming up and new solidarities forming. We know we will achieve our goals,” concluded a hopeful Avantika.