However the Midterms Go, the Republican Party Is Going to Get More Extreme

Trump’s allies have gone from justifying his ­reality-show authoritarian persona as a necessary expedient to embracing it as a positive good. 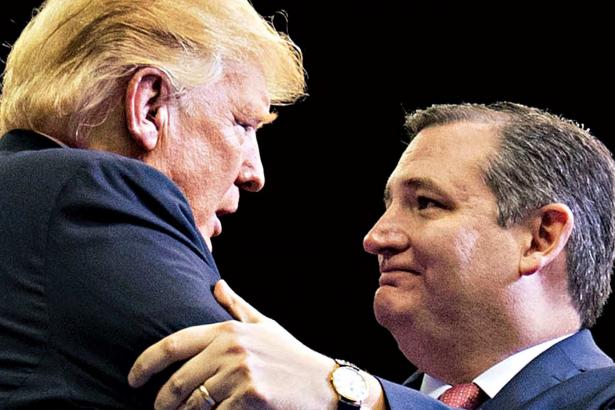 Politics since Donald Trump’s election has felt like a static state of misery, as the president’s approval ratings have been surprisingly stable and the only apparent variable has been each party’s chances of gaining or consolidating power in the midterms. But that reading ignores something tectonic: the rapid decay of the institutional Republican Party. Everything that was terrible about the party that nominated Trump is significantly, terrifyingly worse today. Even more distressing: It is likely to lurch further rightward regardless of the outcome of the elections. This will happen right away.

It was not so long ago that most Republican professionals firmly believed the party was still theirs and Trump had merely borrowed it. The GOP Establishment, one congressional staffer told the reporter David Drucker earlier this fall, had “forced Trump to govern as a ‘conventional conservative.’ ” Ten months ago, when the Senate voted to pass a huge tax cut, Majority Leader Mitch McConnell declared, “If we can’t sell this to the American people, we ought to go into another line of work.”

They couldn’t. They tried convincing the public their tax cuts for the rich will mostly go to the middle class, but the middle class doesn’t believe them. “I would have bet you a lot of money going into this year that if you cut people’s taxes by thousands of dollars per year, that would be politically popular,” Republican consultant Ryan Ellis told Politico. “But it has not worked out that way.” As private Republican polling has confirmed, the party “lost the messaging battle” on taxes.

Rather than finding another line of work, however, McConnell’s colleagues have grasped a disturbing reality: They don’t need to sell their policies to the American people. They’re better off following Trump’s political formula of constructing an alternate reality in which their party is cast as one of economic populists. Recently, Trump has been insisting he has another plan to give the middle class a tax cut. A big one! A whopping 10 percent cut, just for the average taxpayer. “We’re doing it now for middle-income people,” Trump told reporters about a bill he claimed would pass before Election Day.

Reporters quickly noted this was impossible. Congress was out of session until after the election; it would need 60 votes to pass another tax cut, anyway. Trump then insisted he had a secret plan, which he would reveal soon, that would allow a huge middle-class tax cut without adding to the deficit. “We’re doing other things, which I don’t have to explain now, but it will be pretty much a net neutral,” he told reporters. No such tax proposal exists, and nobody actually believes anything like it will ever materialize. Yet Republican leaders are pretending to take Trump’s instructions seriously. “We will continue to work with the White House and Treasury over the coming weeks to develop an additional 10 percent tax cut focused specifically on middle-class families and workers,” promised House Committee on Ways and Means chairman Kevin Brady. Why shouldn’t they go along? What cost is there to sustaining the lie?

Republicans are attempting a similar trick to resolve their political liability on health care, where Trump has ramped up their strategy dating back to the beginning of the Obamacare debate: promise to do all the good stuff Obama­care delivered but without making anybody pay for it. The administration, joined by several Republican states, is suing to overturn Obamacare’s regulations preventing insurance companies from charging higher rates to people with preexisting conditions and, in the meantime, undermining those protections by allowing insurers to sell cheaper plans to healthy people. Yet the Republicans’ health-care message has betrayed not the slightest hint of their anti-regulatory fervor. Arizona’s Martha McSally, who as a member of Congress gave a pep talk to wavering Republicans urging them to vote to repeal Obama­care and not replace it, is running ads for her Senate campaign claiming she “led the fight” to “force insurance companies to cover preexisting conditions.” Florida governor and Senate candidate Rick Scott, whose state is currently supporting the Trump lawsuit, is declaring in an advertisement, “I support forcing insurance companies to cover preexisting conditions.” Trump himself has advanced this lie to its Orwellian conclusion. Not only does he promise to defend the regulations he is actively seeking to eliminate, he has accused Democrats of trying to destroy them: “Republicans will totally protect people with Pre-Existing Conditions, Democrats will not! Vote Republican.”

The defensive effort to steal the economic-populist mantle from Democrats, without making any substantive concessions toward that end, has been largely overshadowed by the louder cultural messaging that accompanies it.

Republicans have stoked white racial paranoia against a shifting array of targets. Kneeling football players and transgender bathrooms have momentarily given way to a convoy of Central American migrants that allegedly contains “unknown Middle Easterners.”

And Trump’s allies have gone from justifying his ­reality-show authoritarian persona as a necessary expedient to embracing it as a positive good. “It doesn’t matter if it’s 100 percent accurate,” a senior Trump-administration official told the Daily Beast, defending the president’s fearmongering attacks on a caravan of potential refugees. “This is the play,” Scott Reed, a strategist at the U.S. Chamber of Commerce, told the Washington Post. “It’s a standard tactic to use fear as a motivating choice at the end of a campaign, and the fact is the fork in the road is pretty stark.” In Texas, when a fan at a Ted Cruz speech exclaimed about Beto O’Rourke, “Lock him up!,” Cruz answered, “Well, you know, there’s a double-­occupancy cell with Hillary Clinton.”

The degree to which Trump’s party has molded itself in his image is worth bearing in mind when contemplating what the next two years might bring.

If Democrats win the House but not the Senate, they will be working with an even more hardened foe: The Republicans who will have lost, or who are retiring, are those most vulnerable to outside pressure; the surviving core, from the reddest districts, will be the most Trumpian. They will be much less likely to abandon their president in the face of incriminating evidence than were Richard Nixon’s Republicans in 1974, and much more likely to escalate his attacks on the rule of law into a full-scale culture war.

In the event Republicans retain full control of Congress — improbable, but about the chances FiveThirty­Eight gave Trump toward the end of October two years ago — the transformation would be even more dramatic. The American people would be led not by a party learning to accommodate its unhinged leader but one trained by him, and the con job they have been enacting on the American people would swiftly come to completion.

Imagine Republicans waking up after Election Day and discovering their aging coalition has been given a new lease on life. They will instantly grasp the possibilities available by campaigning in opposition to reality: telling voters they are protecting popular social programs that Democrats are trying to cut and reinforcing this message through media channels their party effectively controls. What would stop them from launching the full-scale assault on the welfare state that Newt Gingrich and Paul Ryan never mustered the courage to fully enact? Why wouldn’t they go through with abolishing Obamacare and slashing funding to Social Security, Medicare, and Medicaid?

Though they control all branches of the federal government, Republicans have been held back for two years by the expectation of a backlash and a setback in the midterms. After not one but two expert-defying victories, the Trumpian cult of personality would grow exponentially. For all the unprecedented and brazen acts the past two years have brought, what we have not yet seen is a Trumpian party that feels invincible.

*This article appears in the October 29, 2018, issue of New York Magazine. Subscribe Now!