These three families own a combined fortune of $348.7 billion, which is 4 million times the median wealth of a US family. 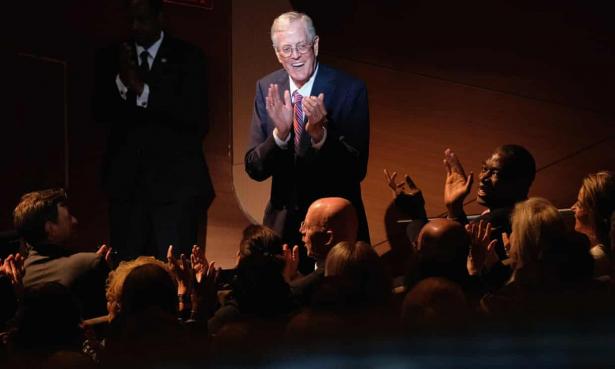 ‘The three wealthiest US families are the Waltons of Walmart, the Mars candy family, and the Koch brothers.’ ,Dia Dipasupil/Getty Images for Lincoln Center

It hardly makes news any more that the US is becoming an extremely unequal country.

Each year new eye-popping statistics juxtapose the reality of decades of stagnant wages for half the country’s workers with today’s extreme concentrations of wealth and power.

The top three wealthiest billionaires in the US – Jeff Bezos, Bill Gates and Warren Buffett – now have as much wealthas the bottom half of the US population combined.

This is possible because the bottom fifth of US households are underwater, with zero or negative net worth. And the next fifth has so few assets to fall back on that they live in fear of destitution.

One troubling indicator that we are drifting toward a society governed by the wealthy is the expanding fortunes of multi-generational wealth dynasties.

The three wealthiest US families are the Waltons of Walmart, the Mars candy family and the Koch brothers, heirs to the country’s second largest private company, the energy conglomerate Koch Industries. These are all enterprises built by the grandparents and parents of today’s wealthy heirs and heiresses.

These three families own a combined fortune of $348.7bn, which is 4m times the median wealth of a US family.

Since 1982, these three families have seen their wealth increase nearly 6,000%, factoring in inflation. Meanwhile, the median household wealth went down 3% over the same period.

This isn’t the normal physics of wealth in the US, where we’ve traditionally abhorred the idea of hereditary wealth and power. Since 1900, most grand fortunes have been dispersed by the time the great-grandchildren come around – hence the old adage: “Shirtsleeves to shirtsleeves in three generations.”

Several dynastic families have used their considerable clout to stage just such an intervention, spending millions to save themselves billions.

They’ve lobbied Congress to tip the rules in favor of dynastic wealth, including tax cuts and public policies that will further enrich their enterprises. In the early 2000s, the Mars, Walton and Gallo families actively lobbied to abolish the federal estate tax, a tax paid exclusively by multimillionaires and billionaires. The Koch brothers have since organized their famous donor network to lobby for tax cuts for the rich and to roll back regulations on the energy industry, the source of their wealth.

Others aggressively use dynasty protection techniques to hide wealth and transfer it to heirs. They hire armies of tax accountants, wealth managers and trust lawyers to create trusts, shell corporations and offshore accounts to move money around and dodge taxation and accountability.

In the face of weakened tax laws and aggressive wealth hiding, we’re facing the emergence of widespread wealth dynasties

For example, the casino magnate Sheldon Adelson, number 15 on the Forbes 400 list, has used complicated trust mechanisms to pass on $7.9bn to his children while avoiding $2.8bn in gift and estate taxation. Adelson recently broke spending records on midterm elections, with more than $100m in campaign donations.

Not all the wealthy are focused on hoarding for the next generation. Warren Buffett, the third-wealthiest person on the Forbes list, decided not to give his children his immense wealth. Instead, he pledged his entire fortune to charity and contributing to the public good through paying taxes.

Instead of lobbying for tax cuts, Buffett testified before Congress in favor of expanded estate taxation. “Dynastic wealth, the enemy of a meritocracy, is on the rise,” Buffett told lawmakers years ago. “Equality of opportunity has been on the decline. A progressive and meaningful estate tax is needed to curb the movement of a democracy toward plutocracy.”

In the face of weakened tax laws and aggressive wealth hiding, we’re facing the emergence of widespread wealth dynasties. The French economist Thomas Piketty has warned that if we don’t intervene to reverse these dynamics, we’re moving toward a “patrimonial capitalism”, where the heirs of today’s billionaires will dominate our politics, culture, philanthropy and economy.

That’s a world none of us will want to be part of.

Chuck Collins is a co-author of the report Billionaire Bonanza 2018: Inherited Wealth Dynasties in the 21st Century United States. He directs the Program on Inequality at the Institute for Policy Studies and co-edits Inequality.org