Our Fights are Connected; Our Resistance Must Be Intersectional

But we must do much, much more than vote. We have to think and act differently about the traumas we are all facing. 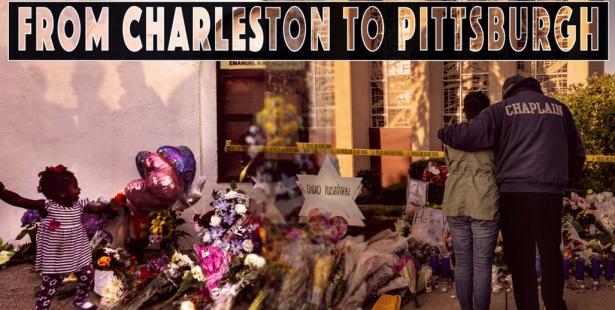 We at AAPF are anguished as we know are many of you at the successive acts of inhumanity that have rocked the country over the past two weeks. Between last Wednesday’s racially motivated murders of Maurice Stallard and Vickie Jones at a Kroger grocery store in Kentucky, and Saturday’s mass shooting at a Pittsburgh synagogue, racist terror has claimed 13 lives.  If the explosives that MAGA fanatic Cesar Sayoc allegedly mailed to prominent political and media figures (and frequent Trump targets) had not been intercepted, that already sobering figure might be even higher. And this political mobilization of hate is likely the tip of the iceberg.

The violence of last week and its white supremacist markings confirm fears that many of us have expressed repeatedly about how Donald Trump’s presidency has unleashed and emboldened the forces of hate. The drumbeat leading to this awful moment has been a steady one, including Trump’s insistence on an equivalency between violent white nationalists in Charlottesville, VA and those who peacefully protested against them, his denigration of African nations as "shithole countries," his reference to Mexican immigrants as "criminals and rapists," and his effort to ban those from Muslim-dominant countries from entering the US. It includes his suggestion that a Black protester at one of his rallies "should have been roughed up," his coded references to a "corrupt, globalist ruling class," and the daily digital demagoguery that spreads fear and outright lies to his most fervent supporters. It includes his decision to send troops to the border to threaten Central Americans lawfully seeking asylum, demonstrating an alarming willingness to use military force to insulate his political power.

As we watch these shocking developments, it becomes abundantly clear that politics as usual will not provide protection against the rapid unraveling of even the most symbolic expressions of core democratic principles. Those who rest their faith in the separation of powers overlook the negligence of the Senate and potentially the Courts in drawing any meaningful lines to constrain this president. In the face of all of this, calling for President Trump to offer solace to the nation in our time of grief is about as reasonable as asking the fox to eulogize the missing chickens when he’s visibly belching feathers.

So there's no question that we have to get out and vote to create the possibility for significant checks on the anti-democratic policies and rhetoric that are unfolding everywhere.  Absolutely everybody must call many bodies to go to the polls. We must outvote the forces of suppression in droves if we are to overcome efforts to suppress the power of our communities.

But we must do much, much more than vote.  We have to think and act differently about the traumas we are all facing.

The Trump playbook relies upon a powerful mobilization of racism, anti-semitism, xenophobia, transphobia, sexism and homophobia. They are not singular forces, but related and reinforcing. The Pittsburgh shooter downloaded this poisonous discourse, blaming Jews for traitorous support of dehumanized "others" -- racially denigrated interlopers who pose a threat to whiteness -- because of the Tree of Life's work helping refugees.  He and Sayoc were vehement believers in the white nationalist mythology about wealthy Jews like George Soros as the "puppetmasters" behind Black activism, a worldview that erases African American agency and presents Jews as disloyal and disruptive to social order. Both of course echo the familiar, wild-eyed venom of self-declared white supremacist Dylann Roof, who murdered 9 African Americans in their place of worship, Mother Emanuel church in Charleston, SC, because, he said, Black people are raping "our women and taking over our country."  This before coldly gunning down Susie Jackson, who at 87 was the senior person among those lost. Like 97-year-old Tree of Life worshipper Rose Mallinger, Jackson survived the more overt racism and antisemitism of the 20th century only to become a casualty of its modern-day reverberations.

To counter this multi-fronted white supremacist project, we must forge solidarity at every juncture that Trumpism has exploited, recognizing, in particular, the unique ways that anti-black racism, xenophobia and anti-semitism have historically worked together in the United States.  We need an intersectional consciousness to build coalitions that can withstand and contain the rise of white nationalism and its entire family of evils.

Because although these forms of discrimination are intrinsically linked, our struggles against them are all too often disparate and siloed. While Saturday’s act of anti-semitic terror is consistent with a broader history of Jewish persecution, it’s also in keeping with a statistical increase in all hate crimes.  Hate crimes trended upward in 2014, 2012, 2010, and 2008. Election years--including midterms--often precipitate a spike. After a steep uptick near the 2016 election, hate crimes continued to rise by 12% in 38 of the nation’s largest cities in 2017. African Americans, Jews, Latinx, and LGBT people were among the most frequently targeted groups. The self-deputization of scores of white people to surveill and police Black people and immigrants in public and private spaces across the country is a symptom of the same malady.

The events of last week are not, then, the miner’s canary, an indication of potential trouble, but rather the confirmation that our society’s toxicity, unnamed and unchecked, will metastasize to every part of the body politic.  The assassination of 11 Jews in worship, days after the murder of two Black people for being Black, tragically recalls the 2015 murder of 9 African American church parishioners in Charleston, SC, and reminds us that the threat of racist terrorism is a malignancy that cannot be arrested by hope, song, or forgiveness alone.

In the spirit of acknowledging our linked fates, we want to remember the fallen 13 of last week, and the 9 who lost their lives in worship before them. The proper memorialization of their lost lives demands that we say all of their names, and carry out a resistance robust and inclusive enough to support all of the communities mourning their loss. 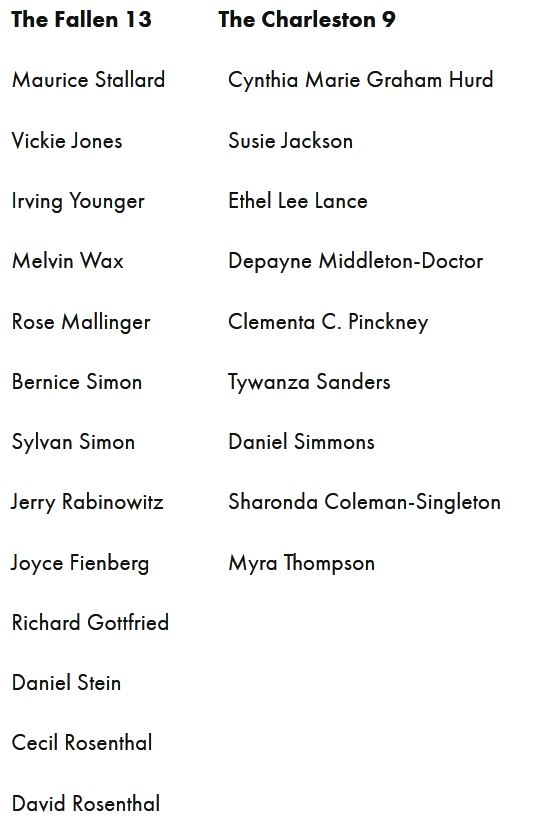 Founded in 1996, The African American Policy Forum (AAPF) is an innovative think tank that connects academics, activists and policy-makers to promote efforts to dismantle structural inequality. We utilize new ideas and innovative perspectives to transform public discourse and policy. We promote frameworks and strategies that address a vision of racial justice that embraces the intersections of race, gender, class, and the array of barriers that disempower those who are marginalized in society. AAPF is dedicated to advancing and expanding racial justice, gender equality, and the indivisibility of all human rights, both in the U.S. and internationally.