The Contradictions of the #Resistance

Jeff Sessions’ tenure as attorney general was vastly more detrimental to democracy and the rule of law than shuttering Mueller’s investigation could ever be. No one should be nostalgic for his tenure. 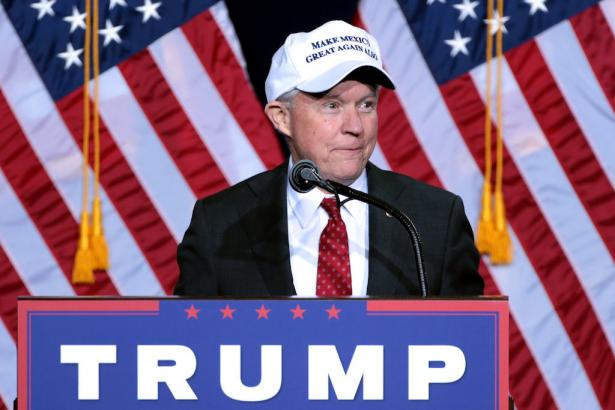 Democracy and the rule of law are under threat in the United States. So it was heartening to see thousands of Americans gather around the country at short notice to protest Trump and the Republican party’s authoritarian tendencies, rallying to demand protection for Robert Mueller’s nearly-finished investigation into possible collusion between the Trump campaign and the Kremlin.

The mobilization effort was impressive. Overnight, a coalition of some of the country’s most progressive groups, including MoveOn.org, Common Cause, Public Citizen, and Indivisible, organized nationwide protests (and even some in Canada) against Trump’s firing of “white nationalist” (read: white supremacist) attorney general Jeff Sessions and the ascension of the anti-Mueller-probe Matthew Whitaker to the post. Ordinary people, many of them likely newly politicized in the Trump era, braved cold weather on a weeknight to take a stand for democratic ideals.

“It’s happening,” said MSNBC host Rachel Maddow, calling the situation an “emergency.” “We knew this would happen at some point — the day has arrived.”

“If you have any doubt about the resiliency of our democracy – especially in the wake of a bruising election – then go type in #ProtectMueller on Twitter and you will be heartened and inspired,” said Common Cause president Karen Hobert Flynn.

“We can all open our eyes, but you know who needs to open their eyes?” said Center for American Progress president Neera Tanden to assembled protesters. “The media, ‘cause we’re clearly in a constitutional crisis.”

The rapid mobilization of thousands of outraged ordinary Americans around the country shouldn’t be scoffed at. Just as with the swift, spontaneous rallies against Trump’s Muslim ban at the start of his presidency — or with the grass-roots howls of rage at the GOP’s attempts to repeal Obamacare and to ram a probable sexual predator and extremist ideologue onto the country’s highest court — we’re seeing a real hunger among ordinary, previously politically disengaged people to protest a far-right administration. As much as the #Resistance inspires sometime derision from the Left, including from myself, there’s a genuine, committed will to resist that undergirds this burgeoning movement.

Unfortunately, the Mueller protests are also a perfect illustration of the Left’s frustration with the so-called Resistance to Trump; namely, how the misguided and often self-interested liberal and centrist establishments, obsessed above all else with the murky Trump-Russia scandal, can co-opt and misdirect powerful grass-roots anger straight into a brick wall.

It’s not that Trump’s removal of Sessions doesn’t have dangerous implications. Sessions’ recusal from the Mueller probe was just about the only measured thing he did in office, and his ouster — along with the elevation of a man clearly ready to thwart the Mueller investigation for political reasons — raises major separation of powers issues.

But Mueller skeptics have long pointed out that liberals and centrists place far too much stock in his probe, particularly given the uncertain contours of the Trump-Russia scandal. Turning it into a cornerstone of anti-Trump resistance was a risky proposition, given that it was, and still is, unclear how much actual fire there was behind the thick plumes of smoke being fanned by the media, disgraced former intelligence officials, and self-interested Democratic politicians. After all, as others have pointed out, “collusion” isn’t really a crime, and if it was, it would also leave the Clinton campaign open to prosecution given that it colluded with the Ukrainian government to undermine Trump’s candidacy. So what happens if Mueller’s probe prove utterly disappointing?

It’s not just the Left that worries about this. Peter Strzok, the anti-Trump FBI agent who was removed from Mueller’s team and became the Right’s top bogeyman for a few months, privately confessed that his “gut sense and concern is there’s no big there there.” Even an establishment outlet like Politico cautioned last month, based on interviews with more than a dozen government investigation experts, that not only could Mueller’s probe not end up revealing anything conclusive, its results might not even be released to the public.

It’s certainly more than possible that Trump did commit some major, identifiable crime. After all, Trump is a career criminal. But there’s a pretty big risk that this particular scandal will turn out to be a “slam dunk” in the same way the case for the Iraq war was.

What’s particularly baffling is that, if you’re worried about authoritarianism and the erosion of democracy in the age of Trump, you don’t have to look far. The Republican Party just successfully rigged an election in Georgia in a way so brazen, it would encourage calls for regime change if it was the country, not the state. They may well have done the same in Florida. That’s not even to mention the myriad turnout-suppressing voting irregularities that are simply factored in as a part of the system. While all of this has inspired outrage, it’s not nearly on the level of Jeff Sessions’ removal.

We can only imagine if the same organizational resources were put toward resisting the Trump administration’s climate policies, policies which — it cannot be said enough — are literally helping drive the potential end of all life on Earth, a fact the administration fully realizes but doesn’t care about. What if this same popular will to resist was also channelled in the direction of the Democratic Party, who plan on doing precisely nothing about climate change now that they will control the House, including, it seems, no plans to use their now-considerable power to investigate and bring attention to the issue? What if it was channelled toward a push for universal healthcare, to deal with a problem that not only seems to most occupy voters’ minds, but is in reality more impactful on a day-to-day basis and to a larger share of the country than the issue of immigration?

Couple this with the strange, knee-jerk lionization of Jeff Sessions in the wake of his firing, typical of the Trump era. The thousands of Americans who took to the streets yesterday weren’t doing so in support of Sessions — but that hasn’t stopped three “mainstream” Republican former attorneys general dubbing him “an outstanding attorney general,” and at least one liberal law professor declaring that Sessions “placed loyalty to his office above fealty to his chief” (“Whitaker looks to be the kind of loyalist Trump lacked in Sessions,” we’re told).

This is nonsense. Trump’s bizarre vendetta against Sessions has apparently disguised for some the fact that the president couldn’t have asked for a more loyal underling than Sessions, his recusal aside. One need only do a quick survey of Sessions’ handiwork over the last two years to see why.

On the criminal justice side, Sessions put private prisons back into play, strengthened the government’s power to steal property from the accused, cut short moves to get rid of the use of junk science in courts, and pushed Trump to start sending accused terrorists to Guantanamo again. He ended federally mandated police reforms in some of the country’s worst cesspits of police brutality, and as his very last move, he limited the use of court settlements to reform such departments. He fired dozens of Obama-appointed US attorneys en masse and replaced them with Trump loyalists, often in jurisdictions where Trump was conspicuously vulnerable to investigation and potential prosecution.

Sessions was a loyal foot-soldier for Trump’s radical anti-immigrant agenda. He directed US attorneys to step up immigration prosecutions, established a “zero tolerance” prosecutorial authority for immigration offenses, expanded the deportation machine, beefed up the number of immigration judges, and pushed to speed up sentencing and deportation processes for undocumented immigrants.

He tried to defund sanctuary cities, sued California over its sanctuary policies, moved to strip immigrants of their citizenship, closed the door to people seeking asylum from gang violence and domestic abuse, and looked to be about to mandate that they be detained even if they’re found to have “credible fear” of returning home. He’s also launched what amounts to an offensive campaign against the judiciary, limiting the independence of immigration judges and pressuring them to decide immigration cases at a rapid clip, while taking cases away from those judges who don’t obey.

Like Trump, Sessions was determined to move the clock back a couple of decades. He withdrew Obama’s protections for transgender students at public schools before later further undermining LGBT and other protections by instructing agencies to look after “religious liberty.” He withdrew from a case against a racist voter ID law in Texas launched under Obama and revoked Obama-era guidance promoting affirmative action. And he re-started the drug war, mandating that prosecutors harshly go after low-level drug crimes, siccing federal drug agents on opioid-ravaged communities, and trying to get the ball rolling on criminalizing marijuana all over again, even in states where it’s now legal.

Finally, while much of the media frets over Trump’s hostility to the White House press corps there’s been comparatively no mainstream outrage over Sessions’ escalation of Obama’s war on whistleblowers. He tripled the number of leak investigations since Obama’s final year, and harshly prosecuted two whistleblowers (to the point where even Trump felt one went overboard), the latter having revealed secret government rules for seizing journalists’ records. He threatened to start subpoenaing journalists as part of this war on leaks, and in one case did in fact seize a New York Times reporter’s phone and email records for this very purpose.

In other words, Sessions’ continued occupancy of the attorney general’s office was vastly more detrimental to democracy and the rule of law than the closing of Mueller’s investigation ever could be. No one should be nostalgic for his tenure.

Sessions’ removal and the reaction to it neatly sum up the head-scratching nature of the Trump years. But the Left should nonetheless take heart. Americans are thirsting to resist the Republican agenda; they just need to be shown how.

Our new issue hits the printer this week. Subscriptions are $10 off today if you follow this link.