The union, Unite Here Local 26, declined to release details of the agreement until the remaining 5,000 Marriott workers who are on strike in San Francisco and two locations in Hawaii settle their contracts. 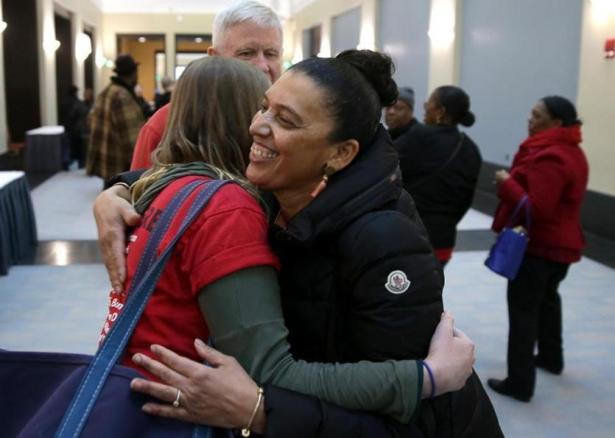 Liliana Afonseca was excited about the apparent settlement. She works at the Westin Copley. , Jonathan Wiggs/Globe staff

The 45-day strike at seven Marriott hotels in Boston is expected to end after workers cast their votes Saturday afternoon on a tentative agreement reached Friday night between their union and the hotel chain.

The union, Unite Here Local 26, declined to release details of the agreement until the remaining 5,000 Marriott workers who are on strike in San Francisco and two locations in Hawaii settle their contracts. In all, 8,000 Marriott workers walked off the job this fall, and agreements have been reached in four other cities — Detroit, San Jose, Oakland, and San Diego.

“This has been a very hard-fought battle, and it has really been driven by the determination, the courage, the intelligence, and the fortitude of the members here in Boston,” said Brian Lang, president of Local 26. “Marriott did listen in the end, and they did step up and agree to a contract that is going to set a new standard for hotel workers in this city.”

In a statement to the Globe early Saturday afternoon, Marriott officials confirmed that a tentative deal had been reached.

“We look forward to welcoming our associates back to work,” a spokesman said in an e-mail.

Local 26 officials said they would hold a press conference Saturday afternoon, following the scheduled vote on the new contract at the Hynes Convention Center.

At the center, hundreds of union members gathered inside a ballroom ahead of the closed-door contract vote. Outside the ballroom, members greeted each other — some embraced, others exchanged warm greetings before going inside. Cheers could be heard outside the ballroom as speakers addressed the crowd.

Luis Castro, 34, a barback at the Westin Boston Waterfront, told reporters that the new agreement will mean better conditions for workers, including job security and fair wages.

He and his wife both work, he said, while he takes classes at UMass-Boston. With the job security provisions in the new contract in place, he said he hopes to start a family.

“We are very proud to do our job, and that is why we are here fighting for the contract because . . . we are proud to work with Marriott and we are proud to serve our guests and do the best for them,” Castro said.

The work stoppage was the city’s first major hotel strike in modern history, involving 1,500 employees, from housekeepers to bartenders to doormen, at seven hotels, including the Ritz-Carlton Boston, Sheraton Boston, and Westin Copley Place. The Boston workers, who went on strike Oct. 3, were the first Marriott employees nationwide to walk out.

Local 26 will use the Marriott contract as a basis for its negotiations with the rest of the unionized hotels in the Boston area — there are 32 in all — a few of whom have already said they would agree to the same terms.

As for the workers, who will cast their votes this afternoon: “They were completely underestimated,” Lang said. “They’re on top of the world.”

BIG NEWS! We have reached a tentative agreement and have a ratification vote scheduled for 2pm at the Hynes Convention Center today. No picket lines tomorrow! See the moment workers walking the final picket lines of the day heard the news. #MarriottStrike #1job pic.twitter.com/BntBnKEsvn

Boston City Council President Andrea Campbell praised the union in an e-mail to the Globe.

“I was proud to stand with Local 26, and applaud their courage,” Campbell said. “I’m happy to see Marriott leadership and the union reach a deal that will set a new standard of benefit for these hardworking employees and ensure our hotel industry continues to thrive in Boston.”

City Councilor Michelle Wu said she passed along her “respect and gratitude” to the union and commended all parties for reaching a tentative deal.

“I’m delighted to hear that these courageous workers have reached a deal after many weeks of advocacy,” Wu said in an e-mail to the Globe. “Their hard-won contract terms mean not just stability for their own families, but brighter prospects for economic mobility across our city and beyond.”