Any amateur politician can engage in lying. Trump is engaging in “post-truth.” Ideology takes precedence over reality. 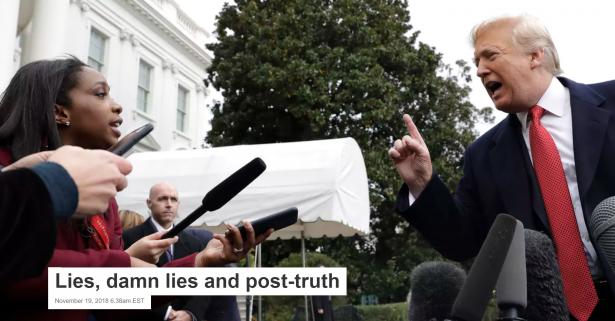 President Donald Trump speaks to the media outside of the White House ,AP/Evan Vucci

Even if we could find some isolated example of a politician who was scrupulously honest – former President Jimmy Carter, perhaps – the question is how to think about the rest of them.

And if most politicians lie, then why are some Americans so hard on President Donald Trump?

According to The Washington Post, Trump has told 6,420 lies so far in his presidency. In the seven weeks leading up to the midterms, his rate increased to 30 per day. 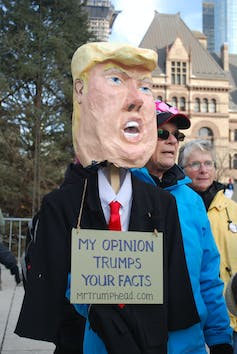 From my perspective as a philosopher who studies truth and belief, it doesn’t seem so. And even if most politicians lie, that doesn’t make all lying equal.

Yet the difference in Trump’s prevarication seems to be found not in the quantity or enormity of his lies, but in the way that Trump uses his lies in service to a proto-authoritarian political ideology.

I recently wrote a book, titled “"Post-Truth,” about what happens when “alternative facts” replace actual facts, and feelings have more weight than evidence. Looked at from this perspective, calling Trump a liar fails to capture his key strategic purpose.

Any amateur politician can engage in lying. Trump is engaging in “post-truth.”

Beyond word of the year

The Oxford English Dictionaries named “post-truth” its word of the year in November 2016, right before the U.S. election.

Citing a 2,000 percent spike in usage – due to Brexit and the American presidential campaign – they defined post-truth as “relating to or denoting circumstances in which objective facts are less influential in shaping public opinion than appeals to emotion and personal belief.”

Ideology, in other words, takes precedence over reality.

When an individual believes their thoughts can influence reality, we call it “magical thinking” and might worry about their mental health. When a government official uses ideology to trump reality, it’s more like propaganda, and it puts us on the road to fascism.

As Yale philosopher Jason Stanley argues, “The key thing is that fascist politics is about identifying enemies, appealing to the in-group (usually the majority group), and smashing truth and replacing it with power.”

Consider the example of Trump’s recent decision not to cancel two political rallies on the same day as the Pittsburgh massacre. He said that this was based on the fact that the New York Stock Exchange was open the day after 9/11.

This isn’t true. The stock exchange stayed closed for six days after 9/11.

So was this a mistake? A lie? Trump didn’t seem to treat it so. In fact, he repeated the falsehood later in the same day.

When a politician gets caught in a lie, there’s usually a bit of sweat, perhaps some shame and the expectation of consequences.

Not for Trump. After many commentators pointed out to him that the stock exchange was in fact closed for several days after 9/11, he merely shrugged it off, never bothering to acknowledge – let alone correct – his error.

Why would he do this?

As journalist Masha Gessen and others have argued, when Trump lies he does so not to get someone to accept what he’s saying as true, but to show that he is powerful enough to say it.

He has asserted, “I’m the President and you’re not,” as if such high political office comes with the prerogative of creating his own reality. This would explain why Trump doesn’t seem to care much if there is videotape or other evidence that contradicts him. When you’re the boss, what does that matter?

Should we be worried about this flight from mere lying to post-truth?

Even if all politicians lie, I believe that post-truth foreshadows something more sinister. In his powerful book “On Tyranny,” historian Timothy Snyder writes that “post-truth is pre-fascism.” It is a tactic seen in “electoral dictatorships” – where a society retains the facade of voting without the institutions or trust to ensure that it is an actual democracy, like those in Putin’s Russia or Erdogan’s Turkey.

In this, Trump is following the authoritarian playbook, characterized by leaders lying, the erosion of public institutions and the consolidation of power. You do not need to convince someone that you are telling the truth when you can simply assert your will over them and dominate their reality.