A landmark study finds that most Americans do not fit neatly into the ideological camps on the right or the left. 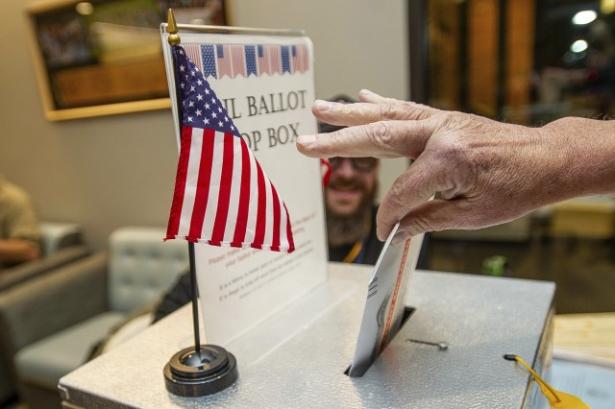 A voter drops an election ballot off at the Pitkin County Administration box in Aspen, Colorado. , Anna Stonehouse/The Aspen Times via AP

Since progressives are only a slice of the larger body politic in America, is it possible to build a sustainable governing progressive majority by appealing to the majority of voters who are fed up with the polarized political climate? I have been pondering that question in light of the recent midterm elections and in light of a groundbreaking, recently-released study of American political attitudes.

The research was conducted by a group called More in Common, an international group of progressive political operatives, thinkers, and researchers based in London and New York who are working to address the growth of political polarization and the rise of ethno-nationalist populism in France, Germany, Italy, and the United States. Over the past year, the More in Common team conducted extensive surveys with 8,000 Americans as well as in-depth interviews with a smaller sample.

Unlike smaller horse-race and issue-specific polls that provide a momentary snapshot of public opinion, the goal of this in-depth research is to uncover core beliefs and underlying values. Known as segmentation research, this line of inquiry allows researchers to study the psychology, cultural beliefs and political behavior of voters in order to identify segments of the population beyond the traditional identifiers of demography and partisanship.

Based on this deep dive, the authors identify seven segments they call the “hidden tribes” of America:

The researchers then offer this sobering analysis: Progressives (8 percent) and Devoted and Traditional Conservatives (25 percent) make up a third of the electorate, and while these groups dominate the political debate in America, the polarization that results from this right-left food fight leaves the four segments in between the two extremes disillusioned, disenchanted and disengaged. The authors call this group—two-thirds of the American electorate—the “Exhausted Majority.” (The researchers describe the tribes as “hidden” because the two most vocal groups get outsized attention.)

Can a sturdy bridge be built between Progressives and this Exhausted Majority? Over time, can Democrats work with them so that their cynicism, frustration and disengagement transforms into optimism, hope and participation?

First off, ignore the high priests of moral equivalency who have used the More in Common study to point fingers at—no surprise—both sides. David Brooks of The New York Times writes, “The good news is that once you get outside these two elite groups you find a lot more independent thinking and flexibility. This is not a 50-50 nation. It only appears that way when disenchanted voters are forced to choose between the two extreme cults.” Andrew Sullivan writes, “I’ve finally found my own tribe! I’m in the ‘Exhausted Majority.’” He then cherry-picks one element out of the hundreds of findings to proclaim, “this exhausted cohort, it turns out, hates political correctness.”

The researchers characterize the Exhausted Majority as people who are fed up with the politics of polarization, are upset by the nation’s poor leadership, and dislike the way politicians play various groups against the others. They see racism as a serious problem, decry hate crimes, support immigrants, and want Dreamers to stay here. And they believe “the system” is rigged in favor of the rich and powerful.

The researchers add this:

The views of the Exhausted Majority often do not represent a midpoint between the wings, but they differ from one issue to the next. For example, in stark contrast to Devoted Conservatives, about 75 percent of them believe that problems of sexism are somewhat serious in America today, and on the issue of abortion, around two thirds support a pro-choice over a pro-life stance. Similarly, they support same-sex marriage (64 percent) and believe that accepting transgender people is the moral thing to do (66 percent).

Based on this evidence, it sure seems most in the Exhausted Majority are closer to progressives than conservatives. There are three ways that Democrats could recruit people with shared views and values and see them become active members of a sustainable governing majority:

One way to manage the necessary and healthy competition within the party over candidates and priorities is to modernize the Democratic Party’s New Deal tradition as a big-tent party. Today, progressives should welcome and work with Traditional Liberals, of course. And progressives should reach out to moderates—independent and center-right voters—without compromising our values or talking like conservatives. But the priority should be to reach out in to Passive Liberals and the Politically Disengaged, groups that add up to 41 percent of the electorate. These disillusioned voters are frustrated with the polarized debate. The political noise-without-policy progress renders them inactive. In addition, many of these voters—a group that includes many people of color—are frustrated by the condescension of liberal elites.

As was demonstrated in states such as Michigan, Pennsylvania, Texas, and Georgia in this month’s election, Democrats might be wise to focus less on shifting positions in hopes of peeling off more conservative and hard-to-get center-right voters, and focus more on reaching out to and inspiring more progressive but less engaged center-left voters.

Following Trump’s 2016 victory, many Democrats understandably focused on the Rust Belt states that flipped to Trump. Some have even suggested that Democrats should move away from culturally-charged issues related to race, identity, and immigration and focus on a colorblind economic populism to win back white working-class Obama-Trump voters.

But in a party that is increasingly diverse, young and cosmopolitan, colorblind economic populism is clearly not the way forward. On the contrary, the fight for economic justice is integrally linked to the fight for racial justice. As Alexandria Ocasio-Cortez recently tweeted, “race and class are not either/or. It’s not one ‘or’ the other, or one ‘more’ than the other. ... When we try to argue which mattered ‘more,’ we miss the whole point. We must champion it all.”

As for our Exhausted Majority, not only do most decry racism and xenophobia, a whopping 89 percent believe the American government is mostly rigged to serve the rich and influential. This provides an enormous opening for Democrats to shift from a tendency to deal with issues of race and class as if they exist in parallel silos, and embrace a narrative that boldly states that all of us are negatively affected by the Republican brew of racism and plutocracy.

In the last few weeks of the midterms, Trump and his party shamelessly exploited racism and xenophobia. Americans can expect more of the same on the road to 2020. Democrats should make clear that Republicans use appeals to racial grievance strategically—to win elections so that they can line the pockets of their donors while picking the pockets of Americans. Time to be blunt: the GOP uses racism to divide, dismantle government, and help the plutocrats; Democrats build racial unity and invest in public services to lift everyone.

Many on the right claim the mantle of patriotism, strip it of its richness, and use it to club anyone who does not agree with them. Some on the left fear a simplistic and romantic embrace of patriotism means a morally vacuous historical whitewash. Where is the Exhausted Majority on all this? According to the researchers:

While there are differences in the degree of intensity, most Americans feel a strong sense of pride and gratitude that they are American. There are also things about the United States that sometimes make them ashamed. To be American, for most, does not require someone to be white or to be Christian. Rather, it is to believe in freedom and equality, and to pursue the American dream.

Isn’t it time for a progressive and inclusive patriotism to be proudly and loudly proclaimed—a patriotism that celebrates the revolutionary American idea of equality, regardless of background and birthplace? It’s a framework which stands in stark contrast to Trump and the GOP’s, which double down on the Blood and Soil nationalism that they promote and that can be found within their older white rural base.

How to proceed? As the recent midterm results strongly suggest, the future of the Democratic party is in mobilizing the disengaged and changing the composition of the electorate. Democrats should reach out and compete everywhere, but clearly a major realignment is under way.

Here’s just one concrete strategy that should be a top priority for this emerging “Coalition of Transformation:” scale up innovative voter mobilization projects that engage in building relationships through year-round, door-to-door organizing work. There’s a reason immigrants and minority voters show up in Nevada every cycle; that young voters showed up in Texas in this cycle; and that African American women show up everywhere and every time. Early, consistent and ongoing investment in organizing is the key to getting them to the polls.

The best of these efforts don’t talk down to the disengaged, and they don’t show up just a few weeks before Election Day. They listen, ask, engage on local issues. They have frequent contact. And they meet low-propensity voters where they are—proud of their American identity, family, faith and community, and doing their best as mothers and fathers and students and workers.

These disengaged voters are a vital part of a 21st-century New Deal coalition. It’s up to progressives to stretch the tent a bit, fill it with diverse candidates and an inspiring agenda, and drive the stakes holding it all together deep into the ground.

Frank Sharry is the executive director of the National Immigration Forum, a pro-immigrant advocacy organization located in Washington, D.C.