Columbia’s decision is the latest—and one of the most notable—in a string of concessions by university administrators at private institutions across the country. It’s a wave of labor action that belongs to the Trump era. 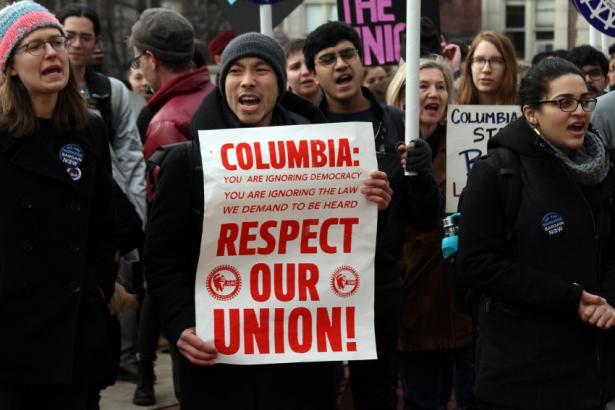 In a 1,035 to 720 vote, Columbia University’s graduate student union has agreed to a bargaining framework with the university’s administration, a milestone victory in the union’s nearly five-year campaign for recognition. The vote outcome, announcedearlier this week, follows Columbia’s November 19 announcement that it would bargain with the union, ending long-standing efforts to halt graduate unionization on campus and in the courts.

Columbia’s decision is the latest—and one of the most notable—in a string of concessions by university administrators at private institutions across the country. It’s a wave of labor action that belongs to the Trump era: The NLRB’s Columbia University ruling, extending bargaining rights to graduate workers at private universities, was issued in August 2016, just before Trump won the electoral college. Graduate unions have spread quickly in the two years since.

In August, contingent faculty at Fordham University won major wage and benefits gains through Spring 2021. In September, Brandeis University graduate workers secured the first contracts dependent on the Columbia decision, with improvements including pay raises, workplace protections and an official say in some campus decision-making.

This month, graduate student workers at Georgetown University voted five-to-one to unionize. And union wins at Columbia and Brown University, key sites in the legal battle over private-university graduate unions, brought the battle full circle. For graduate workers at private institutions, this political moment was made possible in part by Columbia’s union, which went before the National Labor Relations Board (NLRB) in a bid to overturn the 2004 Brown ruling.

In that case, an earlier graduate union at Brown faced legal challenges from Brown administrators—particularly then-provost Robert J. Zimmer, now president of the University of Chicago. The NLRB held in Brown that a private institution’s students couldn’t double as employees for the NLRB’s purposes, regardless of the work they carried out.

From striking to bargaining

In 2016, Columbia’s graduate employee union came before the NLRB, which overturned Brown and restored graduate instructors’ and researchers’ labor protections. Columbia initially refused to abide by the ruling, issuing a statement in January declaring its intent to seek “review of the status of student assistants by a federal appellate court.” For that case to be heard, the union would have had to allege an unfair labor practice—a complaint Columbia could appeal. Instead, the union chose to strike.

“I think they would have preferred that we file an unfair labor practice,” Kate McIntyre, a union organizer and doctoral student in Columbia’s English department, told In These Times. “It’s a waiting game: They think that if enough of us graduate, the union campaign will peter out. And I think they understand that it's to their benefit that the courts are becoming more conservative under Trump."

Columbia’s graduate employee union held a weeklong strike in April, with preparations for a longer, open-ended strike in the fall. But after the April strike, and a pro-union vote by postdoctoral researchers in October, the university reversed its stance and agreed to bargain. McIntyre said postdocs’ strong pro-union vote took administrators by surprise.

“They have a lot of money and they’re able to afford slicker websites, but the fact is that they’ve consistently been losing the P.R. battle,” she said of the university. “Every time the provost would send out an anti-union email, we would gain support. When they were arguing about whether we were workers, it was an argument that was so patently untrue.”

“I never thought I was someone who would be organizing strikes,” said Noah Rauschkolb, a PhD candidate in mechanical engineering. “The ways that the university has acted have made people who were originally suspicious about the union far more frustrated with the university.”

“When I started, I was treated like any other employee,” Rauschkolb told In These Times. “I had clear tasks, I had a huge job to do. It was very similar to any other project management job I’d had before. The audacity of an administration telling me no, I’m not really a worker—the people who are in labs 12 hours a day busting their asses, that’s not their reality.”

With the bargaining framework in place, Columbia’s graduate instructors and researchers are due to begin negotiations in February 2019. McIntyre says their priorities include dental and vision care, robust sexual harassment and discrimination provisions, on-time pay and expanded parental support. Brown’s workers, according to graduate organizer Jeff Feldman, are seeking many of the same benefits and protections.

Administrators at both universities, along with the University of Chicago, Duke University, Washington University in St. Louis, Emory University, Yale University and others, have retained Proskauer Rose, one of the nation’s preeminent “employer-side” labor law firms, to combat graduate unionization efforts. (In August, Proskauer reached a confidential settlement in a $50 million lawsuit alleging pervasive gender discrimination at its offices.)

“I don’t think that the finances explain it,” said Risa Lieberwitz, professor of labor and employment law at Cornell University. “I believe it is an ideological position that opposes unionization because unionization shifts a significant amount of power collectively to the people organizing.”

Lieberwitz also serves as general counsel for the American Association of University Professors (AAUP), which wrote an amicus brief in the Columbia case. “More and more,” she told In These Times, “we see the growth in the ranks of administrators, the shrinking of the ranks of tenured- and tenure-track faculty, and a lot of the shifting of the work of faculty to TAs [teaching assistants] and RAs [research assistants].”

Those budgetary and labor shifts, Lieberwitz said, have made graduate students and adjuncts “a body of very low-wage employees”—at institutions whose senior administrators are among the best-paid university staff in the world.

“It seems like there’s struggle within the university about who gets to have a say and who gets to control it,” said Feldman, the organizer at Brown. “I think they’re concerned about ceding any power or control to grad student workers, and to workers in general.”

Elite private institutions like Columbia and Brown are relatively small. Union drives on their campuses reach only a fraction of U.S. university students. But their successes, and the pricey efforts universities mount to oppose them, are significant. In just two years, almost entirely under the Trump administration, small groups of young organizers have shifted the center of power at what are some of America’s wealthiest—and most politically connected—non-profit corporations.

“Unionization can be very helpful in this era of corporatization,” said Lieberwitz, ”to bring in a more democratic voice from the people who are working as educators and as researchers.”

“For any larger structural changes, they will simply say that it isn’t possible, that there aren’t the resources,” said McIntyre, the Columbia organizer. “A contract first forces Columbia to share information with us about what those resources actually are, and then allows us to insist on issues rather having to accept what they offer us.”

At Brown, Feldman said, “Many of us on the campaign found that, in addition to all the material [gains] a union can bring, the solidarity that emerges from it can go a long way to building a more humane and habitable university where we have a voice.”

In These Times has been selected to participate in NewsMatch 2018—the largest grassroots fundraising campaign for nonprofit news organizations.