It’s Too Easy for the Ultra-Rich to Pass Down Wealth. Here’s How to Fix That

The three wealthiest families in the U.S.—the Waltons (Walmart), the Kochs, and the Mars—have seen their wealth increase nearly 6,000% just in the past generation. Median household wealth over the same period went down by 3%. 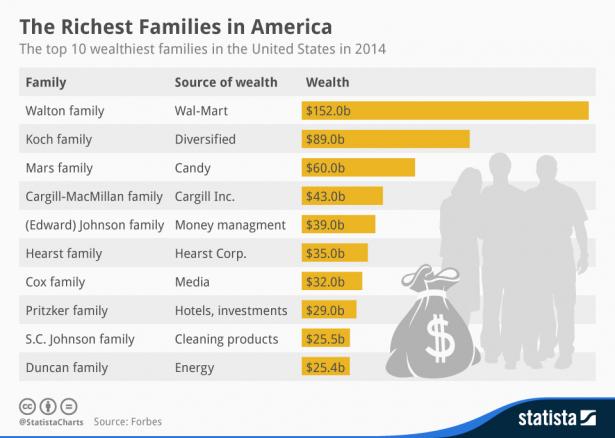 American wealth dynasties are on the rise as the heirs and heiresses of family fortunes watch their wealth skyrocket. Meanwhile, most families struggle to make ends meet.

What, besides simply hiking income taxes, might be done?

A new report I co-authored, Billionaire Bonanza 2018, looks at rising wealth inequality with an eye toward solutions. Included in our key findings is the fact that the three wealthiest families in the U.S.—the Waltons (Walmart), the Kochs, and the Mars—have seen their wealth increase nearly 6,000% just in the past generation.

Median household wealth over the same period went down by 3%.

In the wake of the last Gilded Age—the period from the 1890s to the late 1920s when inequality rivaled periods we see today—reformers used the tax code to break up the immense wealth dynasties of that era. They passed the federal estate tax, a levy on the intergenerational transfer of wealth, in 1916, and instituted high marginal income tax rates on the wealthy, spiking from 25% in 1931 to 63% the next year, and rising as high as 94% on the richest households in 1944 and 1945.

What followed was a great shift in wealth ownership from very unequal to fairly egalitarian from the 1930s to the 1980s—and then a great shift back from the 1980s to today, where we’re basically where we started at the peak of the last Gilded Age.

The shift back came as billionaires like the Kochs used their immense fortunes to push for massive tax cuts, like the Bush tax cuts in the early 2000s, and the Trump tax cuts more recently. (Indeed, on the day after the House voted on the Trump cuts, the Koch brothers handed over a half million dollars to one of the architects behind the bill, House Speaker Paul Ryan.)

We’re due for another era of radical reform.

A common proposal is to increase the progressive income tax on the top brackets, which is obviously part of any solution. But our report focuses on two other ways to use the tax code that get less attention.

The first is to tax extreme wealth directly—specifically, with a 1% tax on the assets of the wealthiest 0.1% of households, those with assets greater than $20 million. Such a wealth tax would raise nearly $1.9 trillion over the next 10 years, according to forthcoming research from the Institute on Taxation and Economic Policy that was shared with me.

The second idea is to tax large inheritances as ordinary income. The existing federal estate tax was designed in part to do that, but it’s been riddled with billionaire loopholes and weakened by outsized exemptions. Among these loopholes is the grantor retained annuity trust, which has been used by billionaires such as Sheldon Adelson and Donald Trump to dodge estate taxes. The tax lawyer who discovered the loophole estimated in 2013 that it was responsible for over $100 billion in lost tax revenue since 2000.

A more effective way to generate revenue and break up growing concentrations of wealth is a federal inheritance tax. An inheritance tax differs from an estate tax in that it simply extends the federal income tax to include large inheritances. Inheritance taxes exist around the world and are in place in six U.S. states.

New York University law professor Lily Batchelder has put forward a frameworkfor how to implement an inheritance tax. Batchelder points out that inheritances represent roughly $4 out of $10 of all household wealth, and bequests add up to approximately $500 billion per year.

Batchelder proposes applying the income tax to inheritances and levying an additional surcharge of 15%. With a $2.1 million lifetime exemption—meaning you could inherit $2.1 million tax free—she estimates the inheritance tax could generate about $200 billion over 10 years. Reducing the exemption level slightly, to $1.25 million, would bring that up to $670 billion over 10 years.

Under normal conditions, most grand fortunes are dispersed by the time the great-grandchildren come around—hence the old adage, “Shirtsleeves to shirtsleeves in three generations.” Only when ultra-wealthy families aggressively intervene does wealth continue to concentrate rather than disperse.

Apart from spending millions on politicians to save themselves billions in tax cuts, wealthy families also employ armies of tax accountants, wealth managers, and trust lawyers to hide their money offshore. Today, an estimated 8% of the world’s wealth hides offshore in tax havens, according to French economist Gabriel Zucman. Addressing this problem will require national action and global cooperation.

Rising wealth inequality is far from inevitable. Previous generations of Americans have pushed for bold policies to address inequality and succeeded. There’s no reason this one shouldn’t as well.

Josh Hoxie directs the Project on Taxation and Opportunity at the Institute for Policy Studies.