Reports on the Mass Uprising Over France's Gas Tax Hike 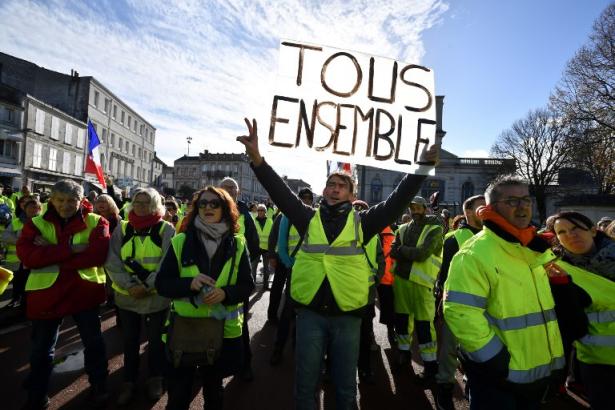 The following report from a left monthly was translated by Portside. The author is an elected official now affiliated with La France insoumise, the party of Jean-Luc Mélenchon. Read the original report here.

The first victory has already been won. Yes, the movement of Yellow Vests has already managed to mark the social landscape, to frame the public debate, to bring forward new faces that speak of the harshness of daily life so little known to spheres of power. The explosions of anger echo one another.

Here, a woman shouts her desperation because she works in healthcare but lives in poverty. She has not had a vacation in ten years. There, a man says to a camera that for him, it’s not so much making ends meet until the end of the month when the nightmare begins from the first day of the month. Elsewhere, a person is violently attacking Macron, the president who clearly does not hear anything, understands nothing: "He really takes us for suckers!”  Another concludes calmly but firmly: "It's a revolution we need. It would take a new August 4 [day in 1789 when feudalism was abolished] for the abolition of privileges”. Pissed off in general. Finally.

Starting with a warning shot against the fuel tax hike, the movement has gone well beyond what anyone could imagine. It is off-axis from the start. The motley nature of the demands, the slogans, the political supporters all leave the doors very open on the outcome of this super-sized rage.

Nothing is certain but the tone is no longer the one that we might have feared at the start, when the far-right currents had rushed to the movement hoping to see if they could make it a breeding ground of resentment for their identitarian obsessions. Far from focusing on “taxes are too damn high,” the sense of social and territorial injustice seems to dominate. The rejection of austerity policies and the defense of public services sets the tone more than personal advantage. Inequalities are clearly singled out. As for the environmental issue, it could have been deserted, but it hasn't been. Ecologist currents are gradually emerging in the action.

The boiling point has been reached and linkages are forming. Again, nothing is certain, but dock workers in Le Havre are joining the Yellow Vests, while high school students have started showing support. Entire sectors of the social movement are now openly involved. Celebrities are stepping up to use their popularity to protect the Yellow Vests on the Champs-Elysées from possible violence. The norm is overturned.

The lines have shifted everywhere, but not in how things are viewed at the top of the state. There one remains entangled in sad accounts dominated by misunderstanding, even aversion, of the world as the people live it. The political crisis is underway - to the point that the delegation of the yellow vests did not finally go to Matignon, the prime minister’s house. As a sign of the times, rebel and communist political groups proposed to submit a motion of censure [no confidence] to Parliament. In the end, the biggest developments crystallize in the political arena. Everyone sees that this movement, while enjoying support from 80% of the population, from political sensitivities and personalities that everyone otherwise opposes, has not laid out coherently the point of the project, the desired change. The list of demands of the committee self-organized by the initiators of the yellow vests presents serious steps forward, but the political confrontation obviously is still to come. [Read an electronic translation of the list here.] The brown, fascism, dreams of taking over. But the yellow is a serious coup de rouge, a left struggle for power. Anger must now turn into hope.

The 4,600 police and gendarmes deployed in the capital were too few and too thinly spread to control an urban guerrilla situation as small groups struck, burned cars, looted businesses and then vanished as police arrived, only to reappear somewhere else 15 or 30 minutes later.

Spurning all political parties, the Yellow Vests got organized on social media and acted locally. The broadcast media, although highly critical, spread the news nationally, and the Yellow Vest movement spread across France, blocking intersections, filtering motorists, and gathering to demonstrate, more and more numerous and militant, on successive Saturdays.

The fight to widen their demands is key to blocking the growth of Marine Le Pen's far right.

"Our responsibility today is to provide answers by taking into account the challenge of our institutions, with which we are associated."

The workers’ movement and its organizations did not initiate this “yellow jackets” movement. This reflects its loss of influence in many regions and working groups. It is also, as the leaders of ATTAC and Copernicus say in a column in le Monde, the result of the cumulative failures of social movements in recent years.

The French government has caved in after Paris’ worst rioting in decades and delayed an increase in energy taxes – but it was seen as “too little, too late” by many protesters whose anger seems increasingly focused on embattled President Emmanuel Macron.