The fact of the matter is that Democrats need to stand up to Trump if they are to vindicate themselves. They ran on a more progressive America, not on an America that is a giant prison surrounded by walls. 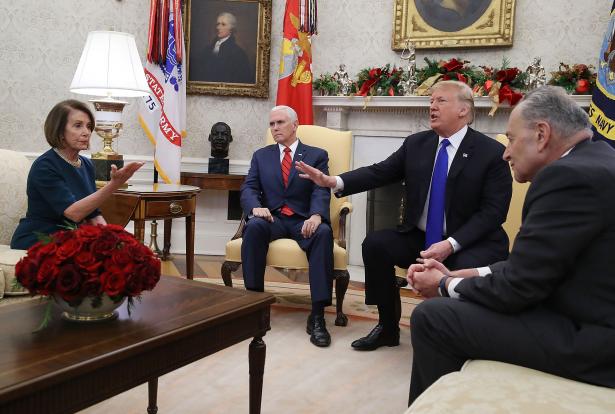 Ann Arbor (Informed Comment) – Trump’s televised badgering of Sen. Chuck Schumer and Nancy Pelosi was made for cable television, which predictably looped it over and over again on Tuesday and assembled “panels” of “experts” solemnly to parse Trump’s insane meanderings, Schumer’s hamming it up for the cameras, and Pelosi’s pitifully forlorn call for a “fact-based” discussion.

Less was said by cable news about the substance of the main point of debate, which is that Trump, having bankrupted the government with massive tax cuts for his billionaire cronies last February, now wants to increase government spending by spending $5 bn for a border wall. Although they initially thought they might throw Trump a bone (a mere $1.6 bn?), the wave of anger and indignation this mealy-mouthed approach provoked among the Democratic faithful appears to have put some iron in their spines. Pelosi told Trump to his face that he wouldn’t be able to find a majority in the House for such spending.

Here are the top 6 reasons the Democrats shouldn’t spend a cent on Trump’s vanity project of a border wall:

1. Trump’s conviction that there is a crisis of illegal border crossings in the Southwest shows that he is stuck in the 1980s and 1990s. The problem has plummeted in significance in the past decade and a half, according to The Center for Migration Studies. The Border Patrol is only arresting about 1/4 the number of those attempting to come in without paperwork as was true in the 1990s. And, in 2014 only one tenth as many people even tried to come in illegally as in 2005. (Taken together, these two statistics show that Border Patrol’s efficiency in apprehending undocumented entrants has increased substantially).

2. Politifact certified former California governor Jerry Brown’s argument that southwest border arrests of undocumented entrants are as low as they have been in 50 years. The trend lines all show a sharp drop-off in this problem, so why enact heroic measures now?

3. Even if you were worried about undocumented immigrants, which most Americans are not, putting billions into wall-building is useless. In 2014, DHS figures show that two-thirds of undocumented immigrants into the US that year came in through airports and simply overstayed their visas. In general, it estimated that among the some 11 million undocumented residents in the US, 42% were visa overstays who came in legally by air or sea, and that proportion is certainly much higher today.

4. The number of undocumented Mexican immigrants in the US has fallen from 6.9 million in 2007 to only 5.4 million today, declining by 1 million persons. The problem is going away, since more are leaving than coming in. . Politifact notes that U.S. Rep. Ron Kind, (D-La Crosse) said, “We’re experiencing a net outflow of illegal, undocumented workers from America back to Mexico. To build a wall now would be locking them in this country.”

5. There is no reason to think that a wall, which would harm the environment and migrating animals, would even be effective. In 2010-2015, nearly 10,000 people came in through areas where there is already a border fence (about 654 miles). People dig tunnels, e.g.

6. A scientific study of 200 urban areas over the past several decades shows that those with high numbers of immigrants for the most part actually saw falling or stable levels of crime. Trump’s conviction that immigrants = crime is empirically untrue. Undocumented immigrants for the most part are especially law-abiding, since they don’t want to be apprehended and deported. Obviously, there are immigrant criminals, but they are a tiny percentage of the whole, and there is substantial evidence that immigrants are less likely to commit crimes than the native-born.

Beyond the problem that Trump repeatedly asserts things that are patently untrue on the immigration issue, the fact of the matter is that Democrats need to stand up to him if they are to vindicate themselves. They ran on a more progressive America, not on an America that is a giant prison surrounded by walls.

Juan Cole is the founder and chief editor of Informed Comment and Richard P. Mitchell Professor of History at the University of Michigan. He is author of, among many other books, Muhammad: Prophet of Peace amid the Clash of Empires. Follow him at @jricole.