"GM needs to pay more attention to relationships on the Hill," said U.S. Rep. Debbie Dingell, D-Dearborn, who described GM recently as the “most disliked company in Washington." 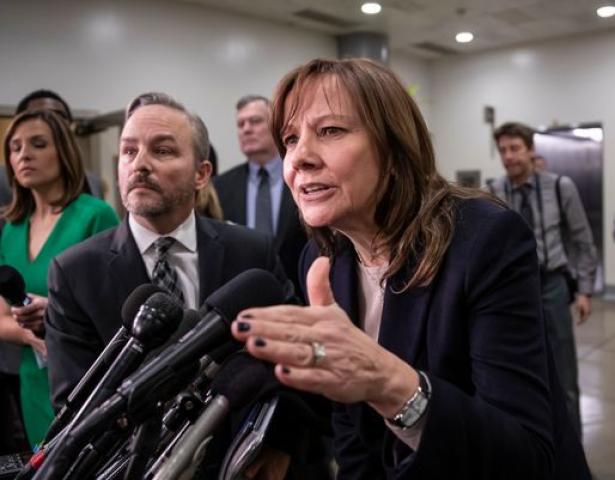 The furious backlash against General Motors Co.’s restructuring, delivered by official Washington, may be a harbinger of things to come.

Even as the Detroit automaker executes a plan to cut 8,000 salaried employees, idle four U.S. plants and imperil 3,300 hourly workers, its crosstown rivals are quietly reshaping their footprints to account for dramatically shifting demand and to bolster their cash hoards to fund next-generation technology.

The result is likely to be frustration, confusion and yet more pushback from constituencies outside the executive suites: Why are automakers booking billions in North American profits on fatter profit margins acting like companies desperately managing an imminent recession?  And how can they justify the actions when two of Detroit’s three automakers owe their survival to U.S. taxpayers amid the global financial meltdown?

GM and Fiat Chrysler Automobiles NV, recipients of $51 billion and $12.5 billion respectively in federal largesse a decade ago, have used their second chances to streamline their businesses and to move on. Congress — and by extension, chunks of the American people — have not. And that’s likely to prove a challenge next year as GM seeks federal extensions of tax credits for electric cars, as the automakers push deeper into the Auto 2.0 spaces of mobility, autonomy and electrification, and as all three companies bargain new national contracts with the United Auto Workers.

The negotiations could prove complex. As GM moves to wind down production at four U.S. plants, Ford Motor Co. and Fiat Chrysler are rebalancing their U.S. production, affecting union members and signaling a slowdown in vehicle sales. Ford said Thursday it will cut 230 jobs at its Van Dyke Transmission Plant in Sterling Heights, and offer those employees positions at other Ford plants, in the first quarter of 2019.

Last month, Ford said it would move 500 hourly employees from its Flat Rock Assembly Plant where it builds cars to its Livonia plant to build transmissions for in-demand trucks and SUVs. The Flat Rock plant, home to the iconic Mustang and Lincoln Continental sedan, will go down to a one-shift schedule in the spring, displacing 650 full-time hourly employees. The automaker also will shift 500 people to its Kentucky Truck Plant to build full-size SUVs and trucks.

Fiat Chrysler is preparing to convert its idled Mack II engine plant in Detroit into a second assembly plant to build a three-row version of the next-generation Jeep Grand Cherokee, The Detroit News reported. The move, which could be announced as early as next week, likely would cushion the blow of the potential closing of GM’s Detroit-Hamtramck assembly plant.

But not quite yet, leaving GM a lightning rod for criticism. CEO Mary Barra attempted to thaw the relationship between her company and Congress with face-to-face meetings in Washington with lawmakers from Michigan and Ohio, where three of the four targeted U.S. plants are located. But reversing a decade of being deemed beholden to taxpayers is likely to take more than a week-long tour of Washington.

Barra's appearances did little to appease members of Congress. They complained of being blindsided by the news of potential plant closures. And the CEO's explanation decidedly did not satisfy President Donald Trump, who was delivered to the Oval Office in part by campaign promises to workers in the industrial Midwest.

"I don’t like what she did,"  Trump fumed in a Fox News interview Thursday. "I think it was nasty."

“To tell me a couple of weeks before Christmas that's she's going to close in Ohio and Michigan — not acceptable to me," Trump continued. "And she's either going to open fast or somebody else is going to go in. But General Motors is not going to be treated well."

The automaker in 2019 will pull vehicles from five plants in the United States and Canada. Four of the facilities — including Detroit-Hamtramck Assembly and Warren Transmission — are in the U.S. and employ about more than 3,000 hourly workers.

On Friday, nearly three weeks after the Nov. 26 announcement of the austerity measures, GM attempted to give clarity about what the plant idlings might mean: It expects be able to offer new positions to about 2,700 of those workers through transfers. But some of those workers would have to commute long distances, or even move to other parts of the country. Notably, the announcement was communicated to lawmakers before it was released to the news media.

In her meetings with lawmakers from Michigan and Ohio two weeks ago, Barra sought to reassure them that GM is sensitive to the impact of displaced workers. But she made clear the automaker views itself as the "new GM," a leaner and more agile company than the one taxpayers bailed out a decade ago. The company notes it repaid most of the money it received in the initial bailout, although the federal government lost $11.2 billion on the transactions that resulted in the U.S. divesting of GM's stock.

Congress vividly remembers the political pain it endured during the period when GM was derided as "Government Motors." And that colors Washington's view of everything the company has done in the last 10 years.

"GM needs to pay more attention to relationships on the Hill," said U.S. Rep. Debbie Dingell, D-Dearborn, who described GM recently as the “most disliked company in Washington."

"They focused on Treasury relationships until they paid it back," Dingell continued. "They feel beat-up upon. But if they invested in making sure people knew what was going on, what we're doing to support them, they wouldn't have been met with the intensity they were met with last week."

GM will have to do much more than a Barra fly-in to improve its standing on Capitol Hill, Dingell said: "It's kind of like being a helicopter parent. You can't helicopter in and think everything is going to be OK."

The company declined to comment on its broader relationship with key constituencies in Washington. During her whirlwind tour of Washington, Barra bristled at suggestions that GM still owes a debt to taxpayers, obligations it should have considered before drafting its austerity plans. She noted that GM has invested $22 billion in the U.S. since 2009.

"We will be forever grateful for the assistance that the U.S. government provided General Motors, and we're trying to make sure we're good corporate citizens and continue to provide jobs and provide vehicles and transportation that consumers want in this country," Barra said. "That's what I think is the most responsible thing that we can do to thank the American taxpayers for what they did for us."

The explanation did little to mollify angry lawmakers who represent districts that include the soon-to-be idled plants, or to quiet critics who insist the Detroit automaker's obligations to taxpayers should continue until it completely reimburses the U.S. Treasury.

"We note with concern that GM has increased its Mexican-based production in recent years, including of the Blazer, and we ask you to consider Lordstown as an alternative assembly facility for vehicles intended for U.S. consumers," Ohio U.S. Sens. Sherrod Brown and Rob Portman wrote in a letter to Barra after their face-to-face meeting over the possible closing of the Lordstown Complex in northeast Ohio.

GM says the decision to build the upcoming Blazer in Mexico was made at least two years ago, although it was not announced until June. Barra told lawmakers that Lordstown "was running full out of three shifts" at the time the Blazer decision was made.

The blowback from Congress and the president is potentially ominous for GM. The company is lobbying for an extension of electric vehicle tax credits, and it's seeking relief from tariffs on foreign steel and aluminum that have been instituted by Trump.

Trump has threatened to yank electric-car subsidies that are used by GM to make plug-in vehicles more attractive to auto buyers, although he does not have the power to target GM individually. Trump has also again threatened a 25-percent tariff on cars imported to the United States in retaliation for GM's decision, a move that would hit its Buick brand particularly hard because its lineup includes vehicles built in Germany, China and South Korea.

GM, which is betting on an electric-car future, is teaming with Nissan Motor Co.,Tesla Inc. and environmental groups in a push to remove a cap on a federal tax credit that provides up to $7,500 to buyers of electric cars.

"I don't run a car company, but all-electric is not going to work," the president said in Thursday's Fox News interview. "It's wonderful to have it as a percentage of your cars, but going into this model that she's doing I think is a mistake."

GM's austerity plans will have major ramifications in its negotiations with the UAW as all three Detroit automakers bargain new labor contracts next year.

The UAW has filed a complaint alleging that GM's "unilateral" decision to idle the plants in Michigan, Ohio and Maryland is a violation of the 2015 labor contract. They say the contract requires the company to notify the union before making decisions that will result in job losses.

“We have been clear that the UAW will leave no stone unturned and use any and all resources available to us regarding the future of these plants," UAW President Gary Jones said.

Kristin Dziczek, vice president of the Center for Automotive Research, said: "After years of very strong profits ... it's going to be difficult to go to the UAW with an austerity contract. For business reasons they had to address this under-utilized capacity now, but doing so kind of sets the stage for how the conversations with the UAW will go."

"The goal in crisis communications is to communicate with compassion, confidence and competence," he said. "In crisis, stakeholders feel anger, fear and other negative emotions. Those all filter their reactions to the facts.  Corporate comments must be sensitive to that, and so must the timing of a bad-news announcement.

"Blindsiding stakeholders with bad news only makes them feel worse, the exact opposite of what GM should want to achieve," Bernstein continued. "It’s difficult to piss off pretty much all your stakeholders at once, but GM appears to have done it."